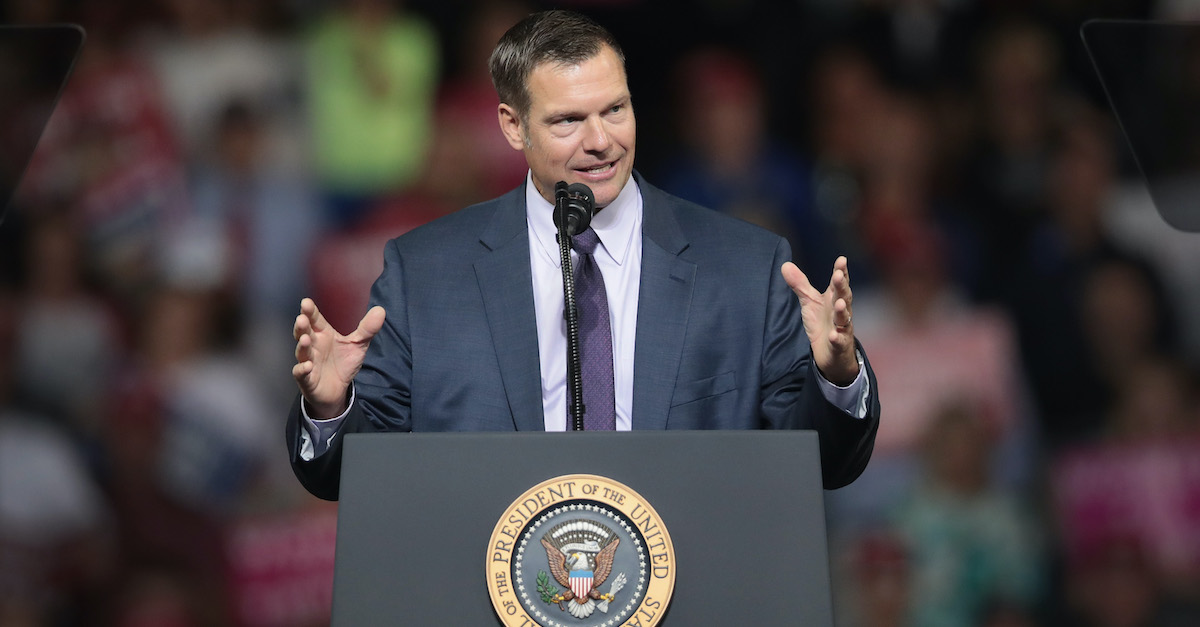 Former Kansas Secretary of State Kris Kobach is trying again to get money from “We Build the Wall,” a charity that offered him $20,000 a month which he cannot try to access until after ex-White House strategist Steve Bannon and others stand trial for allegedly defrauding its donors.

Two weeks after a federal judge refused to let him access the charity’s funds, Kobach took his appeal to the Second Circuit on Monday.

Kobach has not been charged along with We Build the Wall’s founder Brian Kolfage and the charity’s officials Andrew Badolato, Timothy Shea, and Bannon, whom federal prosecutors accuse of duping those who contributed to the $25 million crowdfunded project with the expectation that “100%” of the money would go toward constructing a barrier on the U.S. southern border.

Instead, Bannon pocketed at least $1 million of the money, and Kolfage took $350,000 plus went on a spending spree to buy a Jupiter Marine yacht called the Warfighter, a Range Rover SUV, a golf cart, jewelry, and cosmetic surgery, prosecutors say.

As general counsel, Kobach was compensated handsomely in attorneys’ fees that the government does not allege to be improper.

On Dec. 14, U.S. District Judge Analisa Torres rejected Kobach’s argument that blocking the money interfered with his due process rights.

“Although the Supreme Court has made clear that pretrial hearings on forfeiture may be required when the forfeiture order is challenged by a criminal defendant, particularly where their Sixth Amendment right to counsel is implicated, the law concerning the rights of third parties is less clear,” she noted in a 25-page order.

The judge added that the appropriate time for Kobach to make such arguments would be at forfeiture proceedings following a conviction.

Judge Torres’ order also refused to unseal an affidavit from a U.S. Postal Service investigator supporting the blocking of We Build the Wall’s assets.

Prosecutors warned that disclosing the document could compromise an ongoing investigation.

“Where an investigation is ‘ongoing,’ and the sealed document identifies subjects and the extent of the investigation, ‘[c]ompelling reasons exist to maintain the secrecy of the Government’s investigation,’” Torres wrote.

Kobach’s attorney Justin Weddle argued that the indictment concedes that any alleged fraud ended when We Build the Wall updated the website to disclose that Kolfage would be compensated.

Claiming that the frozen money never has belonged to any of the defendants, Weddle says that We Build the Wall has unfinished business to attend to with it.

The charity wants to transfer title of the constructed section of wall in Sunland Park, New Mexico, to the Department of Homeland Security, build a third section of wall, and pay legal expenses and existing invoices, Weddle says.

Recently unsealed papers give a glimpse of those expenses—and show that prosecutors view all of We Build the Wall’s money as fraudulently obtained.

Opposing prosecutors’ request for documents, Kobach’s counsel told prosecutors on Sept. 22: “Our ability to comply with your request is greatly hampered by the government’s position, as conveyed in our telephone call of August 21, 2020, that all money received from donors is the proceeds of fraud.”

The documents showed how lucrative Kobach’s gig was.

“Among those invoices, the letter explained that We Build the Wall’s contract with Kobach Law LLC provides that Kobach Law LLC will be paid a flat fee of $25,000 per month for its legal services and other work, including Mr. Kobach’s service as general counsel; the payments are due on the first of the month to cover services to be provided that month; the last payment Mr. Kobach received was for June 2020; and therefore, pursuant to the contract, as of September 22, 2020, We Build the Wall owed Mr. Kobach $75,000,” Weddle wrote.

The Southern District of New York declined to comment.

See Kobach’s notice of appeal below: