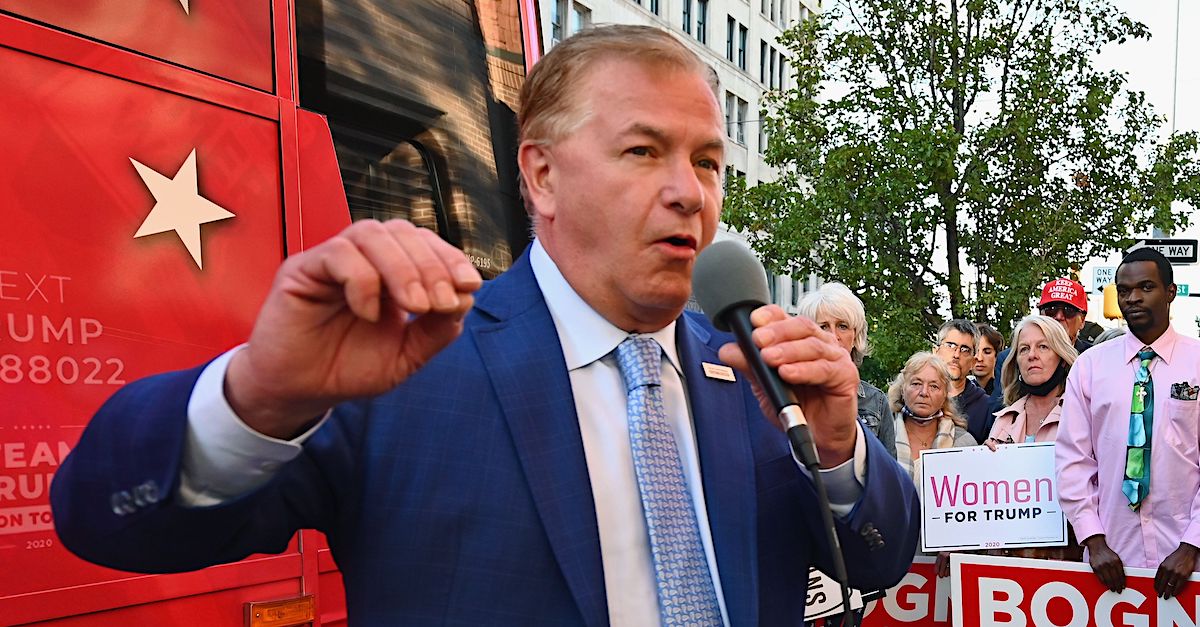 Mark McCloskey and his wife (not pictured) toured Scranton, Pa., on a Donald Trump campaign bus leading up to the 2020 election.

Mark McCloskey, the gun-toting St. Louis personal injury attorney who emerged with his wife from the couple’s palatial mansion to confront Black Lives Matter protesters with a gun in June 2020, used the day of Derek Chauvin’s guilty verdict to openly ponder a run for U.S. Senate in his home state of Missouri.

“I can confirm that it’s a consideration, yes,” McCloskey told Politico on Tuesday night.

McCloskey is eyeing the seat currently occupied by Sen. Roy Blunt, a Republican who is retiring.

Though McCloskey appears interested in throwing his hat into the ring, he is not the first to announce interest in the soon-to-be-vacated position. Federal Election Commission data reviewed Wednesday morning by Law&Crime does not yet show McCloskey listed as a candidate in the relevant race, but it does show a number of other recognizable names in Show Me State politics.

Democrats Timothy Jacob Shepard, Scott Sifton (a former state senator), Jewel William Kelly, Jr., Lucas Kunce, and Spencer Ross Toder have set up campaign committees; so have Republicans Eric Greitens (the former Missouri governor who resigned in a sex scandal after being indicted on a charge which was subsequently dropped), Eric Schmitt (the current Missouri attorney general), John Michael Brinkmann, and Deshon Porter. Nicholas Crane Strauss is listed in the data as running under an unknown party affiliation.

McCloskey, Greitens, and Schmitt spoke last weekend at a Jackson County, Missouri (Kansas City area) Republican dinner, Politico noted. McCloskey and his wife, Patricia McCloskey, also spoke at the 2020 Republican National Convention in a recorded segment. In it, they discussed their rationale for pulling guns on protesters at their mansion in a gated community.

“Good evening, America. We are Mark and Patty McCloskey,” Mark McCloskey said in an awkwardly scripted message. “We’re speaking to you tonight from St. Louis, Missouri, where just weeks ago you may have seen us defending our home as a mob of protesters descended on our neighborhood.”

His political viewpoints were not difficult to determine.

“Whether it’s the defunding of police, ending cash bail so criminals can be released back out on the streets the same day to riot again, or encouraging anarchy and chaos on our streets, it seems as if the Democrats no longer view the government’s job as protecting honest citizens from criminals, but rather protecting criminals from honest citizens,” Mark McCloskey continued. “Not a single person in the out of control mob you saw at our house was charged with a crime, but you know who was? We were. They’ve actually charged us with felonies for daring to defend our home.”

“On top of that, consider this,” he continued. “The Marxist liberal activist leading the mob to our neighborhood stood outside our home with a bull horn screaming, ‘You can’t stop the revolution.’ Just weeks later, that same Marxist activist won the Democrat nomination to hold a seat in the U.S. House of Representatives in the city of St. Louis. That’s the same as winning the general election. That Marxist revolutionary is now going to be the congresswoman from the first district of Missouri. These radicals are not content with marching in the streets. They want to walk the halls of Congress. They want to take over. They want power. This is Joe Biden’s party. These are the people who will be in charge of your future and the future of your children.”

“So make no mistake, no matter where you live, your family will not be safe in the radical Democrats America,” she said.

Mark McCloskey continued by expressing strong support for the re-election of President Donald Trump. His efforts failed, but here’s what he said:

At this moment in history, if you stand up for yourself and for the values our country was founded on, the mob spurred on by their allies and the media will try to destroy you. You’ve seen us on your TV screens and Twitter feeds. You know that we’re not the kind of people who backed down. Thankfully, neither is Donald Trump. President Trump will defend the God given right of every American to protect their homes and their families. But more than that, Trump’s vision for America is a country where you have an opportunity to work hard and build the life you dream of with a job you love, with your children being educated in great schools in a community where your family can play in the backyard without fear, worship in a church without shame and express your beliefs without retribution. Trump brought us the greatest economy our country had ever seen. The Democrats have brought us nothing but destruction.

The full speech is below.

WOLF-TV reported last October that the Luzerne County, Pa. Young Republicans and the Republican Party of Luzerne County welcomed the McCloskeys on a “three-stop tour of the area.”

“Pennsylvania is essential for the president and the winning of the presidency for the Republican Party — and we’re here to do what we can to draw support for the president, for peace, prosperity and for security,” Mark McCloskey said in a local TV interview at the time.

His comments were eerie predictions of the litigation that subsequently ensued over the vote totals in the state.

The WOLF-TV report said the McCloskeys also brought Christmas cards to Pennsylvania. The couple printed greeting cards showing themselves brandishing weapons outside their home. They later claimed they were harassed by a heckler whom they greeted by handing out one of the cards. Video of the incident has been widely shared:

Mark and Patricia McCloskey got photos of them pointing guns at protesters made into holiday cards pic.twitter.com/co3wyjc4iZ

They got 1,000 of these printed and have even been signing them pic.twitter.com/LPAhR8IRAl