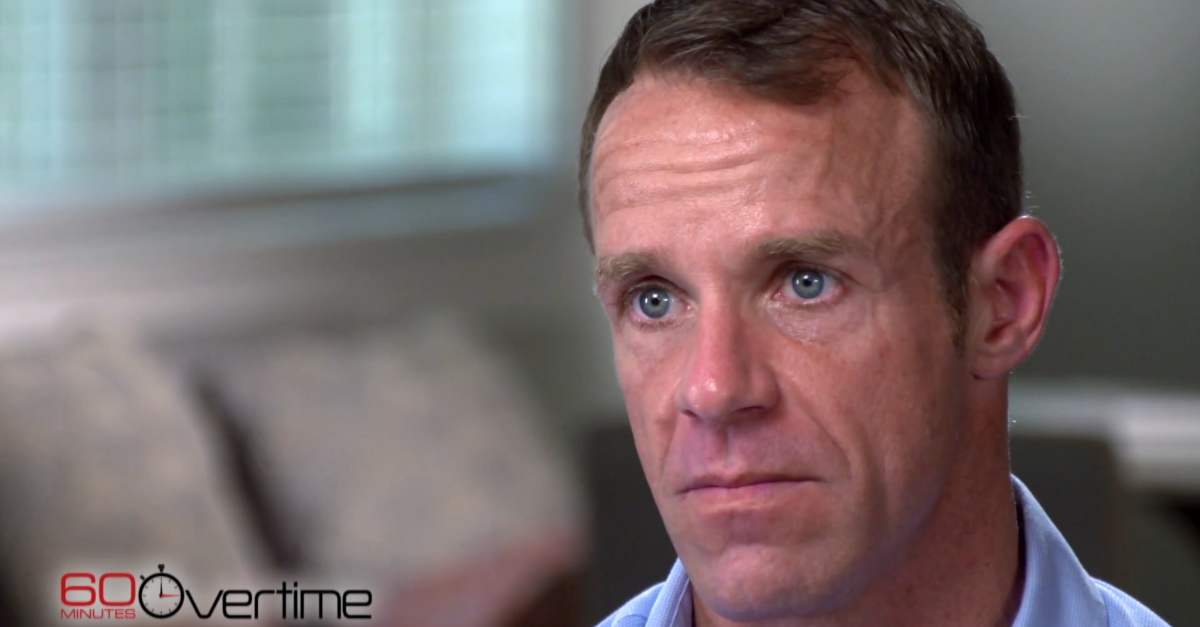 60 Minutes is facing criticism for their Sunday segment on Eddie Gallagher.

Although the retired Navy SEAL was acquitted in the murder of a teenage ISIS fighter despite some ugly stories from men he’d served with, he was still convicted for posing with the corpse. Nonetheless, Gallagher got to keep his Trident Pin after President Donald Trump stepped in. That controversial history, and the show’s coverage of it, fueled the hashtag #Boycott60Minutes Sunday night into Monday morning.

One excerpt of the interview showed Gallagher had a knife–the one that appeared in the photo that led to his conviction–on a table next to bottles of alcohol.

Navy SEAL Eddie Gallagher shows 60 Minutes his war memorabilia, including the knife seen in his photo with the dead ISIS fighter. https://t.co/nDZBPHA0ub pic.twitter.com/b86c5oI8Qu

Criticism over Gallagher case stems over whether a war criminal got away with murder, and whether Trump improperly used his office to cover for the now-retired soldier. Other SEALs claimed to see Gallagher fatally stab the captive ISIS fighter for no reason. Servicemen told an ugly story about Gallagher’s general behavior, including the alleged shootings of civilians in Iraq.

“You could tell he was perfectly O.K. with killing anybody that was moving,” Special Operator First Class Corey Scott told investigators, according to The New York Times.

Scott, a medic who had been granted immunity, took responsibility during testimony for the slaying of the teenager, however. He said that he saw Gallagher stab the ISIS fighter in the neck, resulting in an apparently non-life threatening injury. Corey testified to putting his thumb on the victim’s breathing tube to kill him after Gallagher walked away. He said the teen was “going to die anyway” and wanted to save him from possible torture from Iraqi forces.

In his 60 Minutes interview, Gallagher denied the attack. He said he was inserting a breathing tube into the ISIS captive’s throat.

The trial of Navy SEAL Eddie Gallagher went on for days, but it was one word spoken by a witness — a SEAL from Gallagher’s own platoon — that broke open the case. https://t.co/91CoNCUL8C pic.twitter.com/YiJRowI9JJ

Gallagher has also not forgotten about a number of the men who made claims against him. He has repeatedly called members of his former platoon “mean girls,” and controversially made a video in which he brought up their names, pictures, and the current units of those still serving, according to The Los Angeles Times.

With all that in mind, some said the 60 Minutes segment was a horrible decision.

I think you mean convicted war criminal. Argh—come on guys. What is wrong with you? https://t.co/MhRQp9uMk2

Eddie Gallagher is a war criminal who doubled down by revealing the names, photos and locations of the SEALs who testified against him. For the love of God stop giving him free publicity you turds.

Eddie Gallagher is a war criminal who was so sadistic in his conduct that his fellow Navy SEALs testified against him in open court. He bragged about killing women. He threatened his colleagues if they reported it.

There is no “other side” to this story.#Boycott60Minutes

A CBS spokesman did not immediately return a Law&Crime request for comment.