Sarah Palin Tells a Jury That Her Defamation Suit Against the New York Times Is Just Like David vs. Goliath 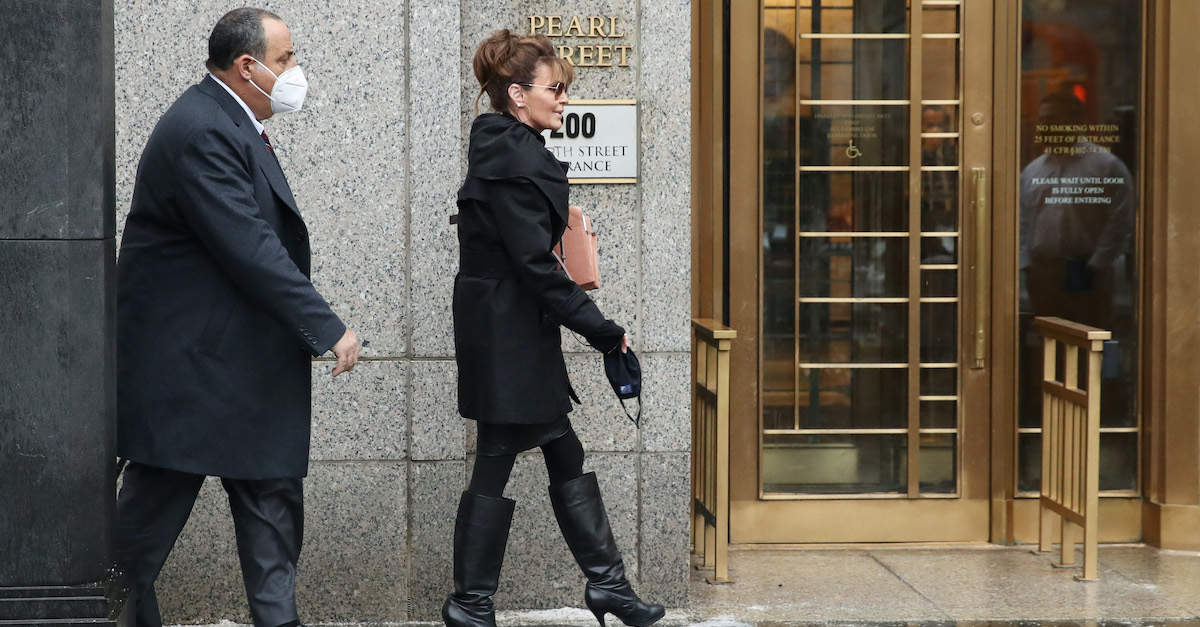 Former Alaska Gov. Sarah Palin (R) told a jury on Thursday that she and her family were subjected to death threats after being falsely linked to a mass shooting in 2011.

When the New York Times revived the old controversy in 2017, Palin testified she thought: “Oh, no! Not again.”

On her second day in the witness box, Palin did not appear to claim that the Times editorial affected her meaningfully, other than leaving her “mortified” and losing sleep. She acknowledged she never received medical treatment for the alleged lost sleep, though she said she prayed on it. She said that she continued to collect paychecks from paid speeches and TV appearances, including a turn on the show “The Masked Singer.”

She did, however, testify that it stirred up a uniquely painful period for her and her family—and inspired her to initiate a defamation suit she described in quasi-Biblical imagery.

Jared Lee Loughner’s mass shooting that killed six people—including a 9-year-old girl and a federal judge—and injured 13 people, including Rep. Gabrielle Giffords (D-Ariz.). Palin faced a firestorm of criticism at the time because her political action committee had put out a map with crosshairs over Giffords’ district and those of 19 other Democrats.

Though no link was ever established between the mentally ill Loughner’s massacre and the map, an editorial by the New York Daily News declared more than a decade ago that “blood is on Sarah Palin’s hands.” Palin never sued over that editorial, but she told a jury that being blamed for that mass shooting had an immediate blowback.

“The death threats really ramped up—disturbing death threats against my children,” Palin said, referring to the immediate aftermath of the 2011 Loughner shootings. “There seemed to be a campaign out there from my daughter, Piper.”

One of Loughner’s victims was 9-year-old Christina-Taylor Green, and Palin said that many hoped her daughter would suffer the same fate.

Some six years after that difficult period, Palin said, she was “mortified” to learn that the Times printed the same link in the editorial titled “America’s Lethal Politics.”

As an attorney for the Times noted during opening statements, the editorial had been sparked by the 2017 congressional baseball shooting, who shot Rep. Steve Scalise (R-La.). Shooter James Hodgkinson’s politics, a supporter of Sen. Bernie Sanders (I-Vt.) who loathed then-President Donald Trump (R), spurred the Times editorial board to denounce the consequences of harsh political rhetoric.

Palin noted that she defended her democratic socialist foil.

“I did not want to see more untruths printed,” the ex-VP candidate said, adding that Sanders should not have been blamed in a “knee-jerk reaction” by those trying to “score political points” and “capitalize” on violence.

The Times editorial ran for roughly 12 hours before the paper ran a lengthy correction stating that there was no link between the map and the 2011 shooting. The correction did not mention Palin’s name, pursuant to a policy meant to avoid compounding the error by repeating it, but the revised editorial continued to mention the controversy about the map.

“Before the shooting, Sarah Palin’s political action committee circulated a map that showed the targeted electoral districts of Ms. Giffords and 19 other Democrats under stylized cross hairs,” it read. “But in that case no connection to the shooting was ever established.”

Palin said that wasn’t much better.

“Nothing changed,” she said. “They doubled down.”

She also quibbled over the meaning of the word “circulated,” telling a jury that Sarah PAC just posted the map on the website.

Palin acknowledged that she never asked for the correction, before or after tweeting that she was “considering options” with her attorneys. “No, they just accused me of inciting murder,” Palin said. “I didn’t think I would get a friendly response.”

(1/2) @nytopinion – commonsense suggestion by a journalist, am talking to attorneys this AM and exploring options. BTW, wonder.. pic.twitter.com/jACvxwUBZH

Palin noted that she never sought an apology, either. Her attorneys have made the paper’s policy against issuing apologies a running theme of the trial.

In explaining her decision to sue the Times for defamation, Palin described herself as a “David,” representing “the people,” facing off against the Gray Lady’s “Goliath.” She said that she asked herself “what were the stones that David could use” in that effort.

“I was up in Wasilla, Alaska, up against those who buy ink by the barrel, and here I was with my No. 2 pencil on my kitchen table in Alaska,” Palin declared.

Palin appeared to describe little tangible impact from the 2017 editorial, other than lost sleep. The testimony about death threats involved a time frame predating its publication.

On cross-examination, the Times‘s attorney David Axelrod asked her a series of questions demonstrating that the ex-Wasilla mayor, Alaska governor and vice presidential candidate to John McCain (R) was no stranger to the political arena.

The paper’s questions also showed that Palin’s ability to earn income continued long after the Times editorial, including a paid appearance on “The Masked Singer.”

Palin jokingly objected when Axelrod asked him that question, though she acknowledged she accepted a paycheck for it.

After her unsuccessful 2008 bid for the White House, Palin leaned into her reputation as a lightning rod for the political left. Asked if she has been described as “polarizing,” she acknowledged: “I’ve heard that.” Palin was also known for hyperbolic language, releasing a statement after the Giffords shooting seeming to suggest that criticism of her was a “blood libel.”

Historically, a “blood libel” has been understood to mean the antisemitic lie that Jews used Christian baby blood in their matzoh—a false theory that led to centuries of persecution and massacres against the Jewish people.

“I did not expect that anybody would take such issue with it,” Palin said, referring to the outcry over the analogy.

Palin appeared to duck a series of questions asking if she was referring to the fact that news outlets tied to her map to the Loughner shooting, describing instead as a cautionary musing about the “power of the pen.” Earlier in her testimony, she tried to sow doubt about the targets on the Sarah PAC map were crosshairs, telling a jury they also look like “surveyor markings.”

Axelrod also confronted Palin about her defiant tweet the year before the Loughner shooting, declaring: “Don’t Retreat, Instead — RELOAD!”

The Times has argued that Palin was used to criticism, continued to have a career after their editorial, and wasn’t damaged by it. Palin acknowledged on cross-examination that she has flirted with the idea of running for public office again, remarking “The door’s always open.” To prevail in her lawsuit, Palin has to show that the Times harbored “actual malice,” a standard established more than half a century ago in the landmark litigation Times v. Sullivan. It is not enough to show the original editorial was inaccurate, a point the paper concedes.

Even if she makes that showing, Palin will have to show damages, and Axelrod noted that she tweeted out she would hit the campaign trail for then-Senate hopeful Judge Roy Moore, three months after publication.

“Hitting the trail… stay tuned for details!” Palin wrote, linking to information about her bus tour.

Ending his cross-examination with a string of questions about First Amendment freedoms, Axelrod noted that everybody in the United States has the right to voice opinions, even unpopular ones. Palin agreed with the sentiment, adding “as long as everyone’s speaking truthfully.” Axelrod added that the faith of the First Amendment is that correct ideas will ultimately prevail, alluding to the Times’s prompt correction. The paper has not lost a defamation case in more than 50 years.