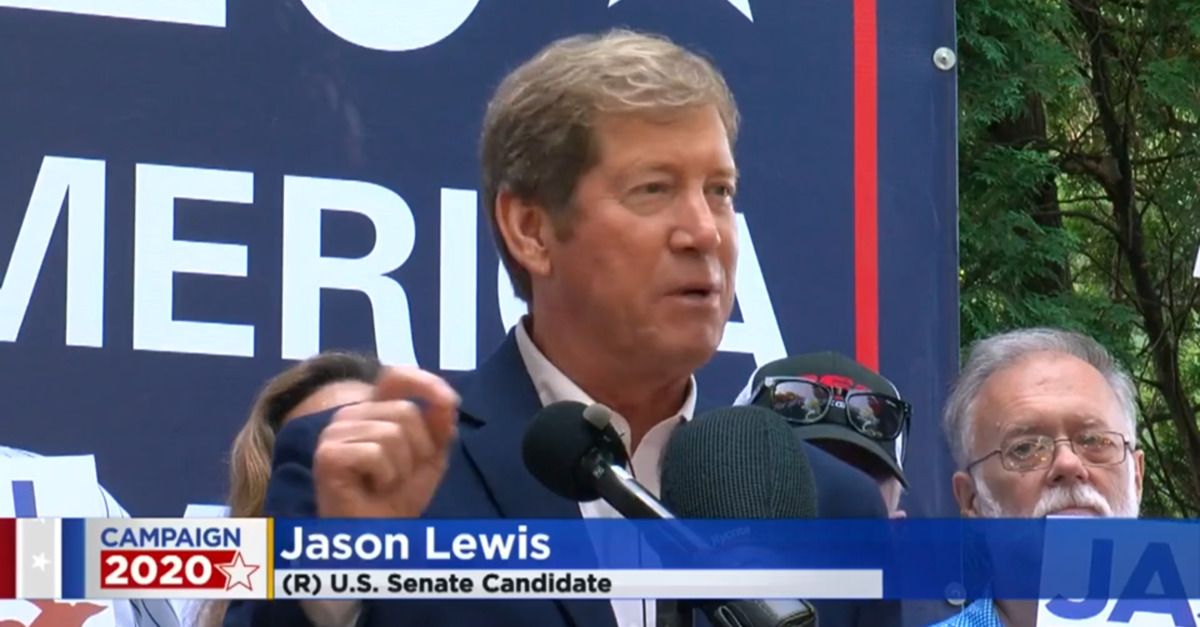 Minnesota Republican Senate candidate Jason Lewis once claimed the “Jewish lobby” controls the GOP and that Republican members of Congress have “dual loyalties” to the United States and Israel.

The comments were made during a February 2013 episode of The Jason Lewis Show, a radio program hosted by the former U.S. congressman. Lewis served one term as the representative for Minnesota’s second district. He’s now running for the U.S. Senate.

Several snippets of the broadcast in question were posted to Soundcloud on Thursday by CNN’s Andrew Kaczynski.

According to Lewis, many Republicans view Israel as America’s “51st state” and do not countenance anything less than full-on, reflexive support for Israel–lest they be tarred as an “anti-Semite.”

Lewis made the series of comments in response to a listener question asking the host to explain America and Israel’s long relationship.

“You’ve got a number of dual citizens, by the way, who are citizens of Israel and citizens of the United States serving in government,” Lewis said. “In any other country that might be seen as a problem, but it’s not here because of that special relationship.”

Lewis offered three major reasons to explain why the U.S. is so cozy with Israel despite their leadership’s repeated subversion of the so-called peace process and two-state solution.

The first reason, Lewis said, is due to Cold War-era loyalties.

Lewis then continued on:

Two is contrary to what the punditry class says. AIPAC and a very, very strong American Jewish lobby. I don’t say that as a negative. I mean I think they’ve been very proficient and they’re successful people and therefore they’ve got power in Washington. But they do. To deny it is to deny reality.

Perhaps somewhat ironically, Lewis’s commentary is somewhat similar in content to the same criticism leveled at U.S. policymakers by Democratic Rep. Ilhan Omar, who is also from Minnesota. Omar, however, never used the term “Jewish lobby” or made any suggestion she was referring to the Jewish people when she controversially described the lobbying power exercised by the American Israel Public Affairs Committee. To date, Lewis has waged his campaign as something of a referendum on Omar’s leadership.

“And three is religion on the part of evangelicals–on the part of those who get foreign policy out of the Old Testament–which I think is terrifying to be perfectly honest with you,” Lewis added. “If you’re saying there’s a biblical command that we send young men and women to die or go to war because of something said so in scripture, how is that any different from what the people we’re fighting are saying?”

At one point, Lewis makes pains to note that he doesn’t believe in a “Jewish cabal,” the “Jewish banker theory,” or that “the Jewish lobby controls America.”

He does stand by his criticism of the GOP’s alleged fealty to Israel:

They do control the Republican Party right now. The Republican Party is essentially a neoconservative party that believes [in] unending support for Israel. A blind loyalty towards Israel is the linchpin of being a good Republican. And when you get those sort of dual loyalties, what happens when it’s not in America’s best interest?

Lewis also took note of former secretary of state James Baker, who served during the administration of George H.W. Bush. Baker allegedly once said, “Fuck the Jews,” since they don’t vote for Republicans. Apart from this apocryphal piece of realpolitik, however, Baker was decidedly tough on Israel in a way not seen from a U.S. presidential administration since.

During a 1990 appearance before the U.S. House of Representatives Foreign Affairs Committee, Baker asked for a some amount of “good faith” from then-Israeli prime minister Yitzhak Shamir. “When you’re serious about peace, call us,” Baker added, providing the number of the White House switchboard.

“He’s long been replaced,” Lewis said of Baker, “he’s long been diminished by the John Boltons of the world.”

Bolton is not Jewish. And he has never been a citizen of Israel.