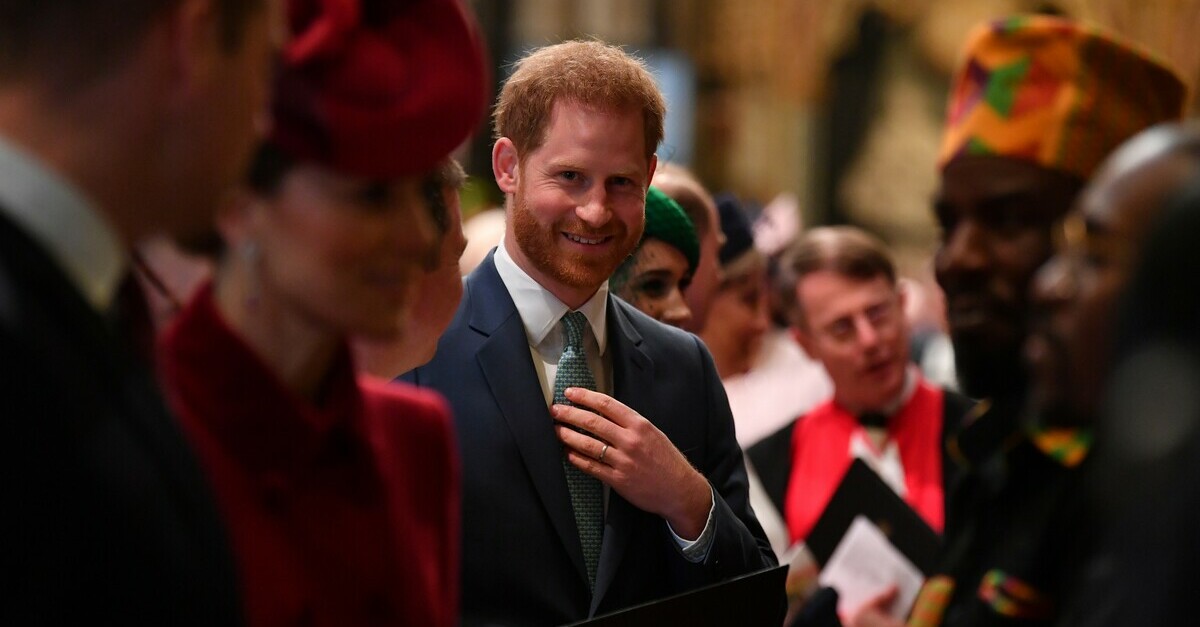 Prince Harry, Duke of Sussex (C) is introduced to performers as he leaves after attending the Commonwealth Day Service 2020 on March 9, 2020 in London, England.

Prince Harry, the Duke of Sussex, accepted an apology and “significant damages” from The Daily Mail after its affiliates previously accused him of having “turned his back” on the Corps of Royal Marines following his decision to step down as a senior member of the United Kingdom’s royal family.

The sixth in line to the throne sued Associated Newspapers for libel over two articles published last October by The Mail on Sunday and Mail Online. The ever-outrageous British tabloid’s articles falsely claimed the prince had “not been in touch” with Britain’s armed forces “since his last appearance as an honorary marine in March” of 2020.

The duke’s military career spanned a decade and included two tours of Afghanistan. Harry had to give up all three of his military appointments as part of the deal he struck between the royal family when he and Meghan Markle stepped back from their duties as royals, following a vituperative campaign of personal, harassing, and often-racist attacks in the U.K. press, public and other institutions.

A statement from Buckingham Palace at the time confirmed Harry was the one forced away, not vice versa as the tabloids claimed.

“As agreed in this new arrangement, they understand that they are required to step back from Royal duties, including official military appointments,” the royal family noted. “They will no longer receive public funds for Royal duties.”

The younger son of Prince Charles and Princess Diana, represented by attorney Jenny Afia, said that Harry has made “repeated and concerted efforts to continue to support the Royal Marines and other members of the Armed Forces” in the aftermath of his departure.

The articles “constituted not only a personal attack upon the Duke’s character but also wrongly brought into question his service to this country,” Afia said.

She also said that Harry was “proud to have served in the British armed forces for 10 years in Her Majesty’s name” and noted that he “has maintained active links with those forces ever since and will continue to do so in the future.”

“All of these allegations are false as The Mail on Sunday and the Mail Online have accepted, albeit after considerable damage was already done,” his attorney said during a remote hearing in front of the London-based High Court of Justice on Monday.

“The baseless, false and defamatory stories,” Afia continued, “constituted not only a personal attack upon the duke’s character but also wrongly brought into question his service to his country. Furthermore, the publication of such allegations will unfairly tarnish and diminish the organizations with which the duke is associated and thereby hinder the valuable work they do.”

Those apologies were posted by the outlets in January, along with a message that they would be making a sizeable donation to the Invictus Games Foundation. Founded by the duke, the charitable organization runs the Invictus Games, which his official website describes as “an international adaptive sporting event for wounded, injured and sick servicemen and women, both serving and veteran.”

The description goes on:

The Games use the power of sport to inspire recovery, support rehabilitation and generate a wider understanding and respect of all those who serve their country. The first Invictus Games were held in London in 2014 followed by Orlando, Florida in May 2016, Toronto, Canada in September 2017 and Sydney Australia in October 2018. The next games are scheduled to be held in The Hague in 2021, followed by Dusseldorf, Germany in 2022.

The apology is as follows:

An article on 25 October 2020 reported that Prince Harry had been accused by a top general of turning his back on the Royal Marines since withdrawing from his military roles in March and that, in an apparent snub to the Armed Forces, he had failed to reply to a letter from Lord Dannatt, a former Chief of the General Staff.

We now understand that Harry has been in contact in a private capacity with individuals in the military including in the Royal Marines to offer informal support since March and that whilst he did not initially receive the letter from Lord Dannatt referred to in the article due to administrative issues he has since replied on becoming aware of it. We apologise to Prince Harry and have made a donation to the Invictus Games Foundation.

In the end, however, The Mail on Sunday’s publisher did not make that donation directly and instead sent the funds to the duke himself.

The prince’s representatives claimed this turn of events was ultimately misleading.

“The Mail again misled their readers in December by claiming to make a charitable donation as part of an initial apology,” a spokesperson for the duke told Bazaar. “They did no such thing. The duke is personally donating the significant damages recovered from this legal resolution to the Invictus Games Foundation.”

Markle is also suing The Mail on Sunday over unrelated invasion of privacy and copyright claims after the outlet published excerpts from a letter she sent to her estranged father in 2018.

Editor’s note: this story has been amended post-publication to include the text of the December apology in full.