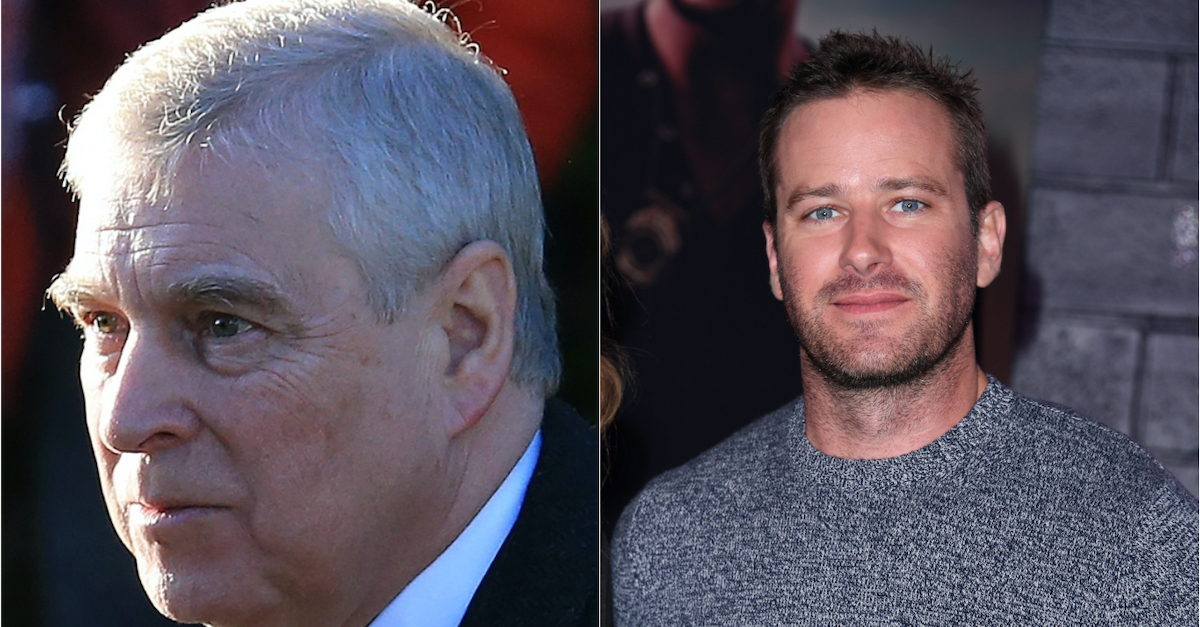 Just hours before a debut hearing in a lawsuit accusing Prince Andrew of sexually abusing a 17-year-old, the royal’s attorney to the stars filed a notice of appearance “for the purpose of contesting purported service of process and challenging jurisdiction.”

The prince’s lawyer Andrew B. Brettler, from the Los Angeles-based firm Lavely & Singer, also represented actor Armie Hammer after a woman accused him of sexual assault, as well as multiple other Hollywood notables accused of sexual misconduct during the #MeToo era.

Brettler filed his notice of appearance on Monday, just hours before being expected to appear in court to try to fend off a lawsuit filed by Virginia Giuffre, who claims that the prince sexually abused her in three different locales.

Giuffre, one of the most outspoken and prominent victims of the now-deceased Jeffrey Epstein, alleges that the prince sexually abused her in three locations: two properties of Epstein—a New York mansion and private island in the U.S. Virgin Islands—and one belonging to accused accused sex trafficker Ghislaine Maxwell, her London home. Maxwell can be seen in the third locale in the background of a photograph showing the prince with his arm around Giuffre’s waist.

On Friday, Giuffre’s process server filed an affidavit asserting that he successfully served the prince by way of the Metropolitan Police Office and Head of Security at The Royal Lodge.

According to the affidavit, the process made two attempts on Aug. 26—the second of which passed muster under U.K. law.

“On his first attempt on August 26, 2021, a police officer met the process server at the main gates of the property, and the officer informed the process server that he had been instructed not to allow anyone on the property for the purpose of serving court papers or to accept service of any court papers,” Giuffre’s lawyer David Boies wrote in a five-page letter on Friday.

Boies says that this complied with the demands for service under U.K. law., particular a clause requiring a defendants to be served at his “usual or last known residence.”

In a letter that same day, Andrew’s other counsel from the Blackfords law firm claimed that Giuffre’s lawsuit “may not be viable.”

“We are still considering the legal position, which is complex, but we also appreciate the need to keep the Senior Master updated as to the status of these proceedings,” the Sept. 6 letter states. “The letter is not intended to waive privilege in any of the underlying documents or discussions.”

Giuffre filed her lawsuit against the prince in the Manhattan-based federal court where she previously sued Ghislaine Maxwell, who is awaiting trial later this year in the same jurisdiction: the Southern District of New York. The district’s former U.S. Attorney Geoffrey Berman released an extraordinary public statement years ago declaring that Prince Andrew provided “zero cooperation” with his probe of the Epstein scandal.