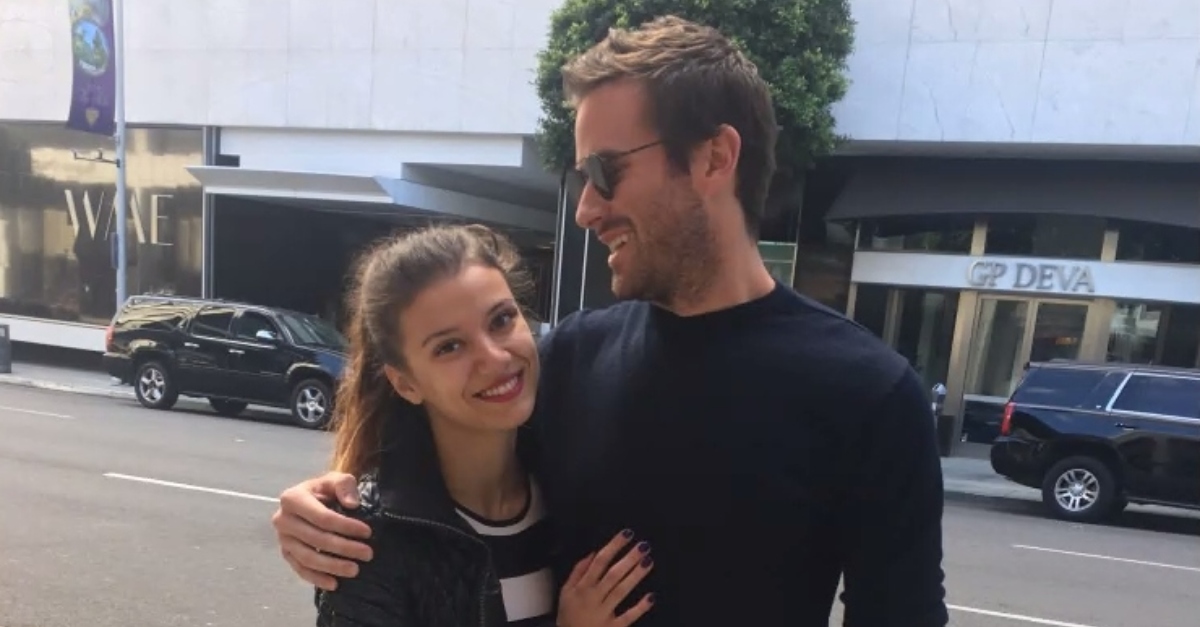 Effie, and Arnie Hammer; purportedly from before the alleged rape.

A woman said on Thursday that actor Armie Hammer raped her for over four hours in a 2017 incident in Los Angeles, California.

He “repeatedly slammed my head against a wall, bruising my face,” said the woman, who stepped forward as Effie Angelova. “He also committed other acts of violence against me to which I did not consent. For example, he beat my feet with a crop so they would hurt with every step I took for the next week. During those four hours, I tried to get away but he wouldn’t let me. I thought that he was going to kill me. He then left with no concern for my well-being.”

Her attorney Gloria Allred declined to say in a press conference Thursday whether this was the same Effie behind the “House of Effie” Instagram account, which sparked the abuse controversy around Hammer. Domestic violence is lurid by definition, but the claims around the actor is another matter. The House of Effie previously published messages purportedly showing Hammer writing a woman that he was a “cannibal,” and “If I wanted to cut off one of your toes and keep it with me in my pocket so I always had a piece of you in my possession?” Other unverified claims surfaced, but Hammer’s ex-girlfriend Jessica Ciencin Henriquez said the messages were real. Another ex, Courtney Vucekovich, made a cannibalism-related claim. She said that Hammer told her he wanted to break her rib, barbecue it, and eat it.

The Social Network actor and his attorney have denied allegations of wrongdoing. Lawyer Andrew Brettler has said that encounters his client had with sexual partners were “completely consensual in that they were fully discussed, agreed upon, and mutually participatory.”

Allred took issue with this framing during the press conference, saying that even if a partner agreed to a sexual activity, she can withdraw consent.

“If she does withdraw her consent and asks her partner to stop for any reason, he is legally and morally obligated to stop,” Allred said. “If he does not stop, he is then at risk of committing a crime against her. In addition, a sexual partner needs to be aware of the nature and the scope of the consent that is given. Even if a partner consents to some sexual acts, that does not mean that there is consent to any and all sexual conduct with her. It should also not be interpreted as consent to sexual abuse or criminal violence against her.”

Effie said that she met Hammer on Facebook in 2016, and fell in love immediately. She described him as a manipulator, who tested her devotion to him, and abused her emotionally, mentally, and sexually. She said that Hammer raped her for over four hours in L.A., slammed her head against a wall, and engaged in other acts of violence, to which she did not consent. She described this as a traumatic experience, and had felt that there was no way out but to take her own life.

Allred said in the press conference on Thursday that the incident happened in the jurisdiction of the Los Angeles Police Department, and they turned over evidence to law enforcement. She noted there were pictures of some of Effie’s visible injuries. The LAPD did not immediately respond to a Law&Crime request for comment.

Brettler once again denied wrongdoing on behalf of his client.

“Effie Angelova’s own correspondence with Mr. Hammer undermines and refutes her outrageous allegations,” he wrote. “As recently as July 18, 2020, Ms. Angelova sent graphic texts to Mr. Hammer telling him what she wanted him to do to her. Mr. Hammer responded making it clear that he did not want to maintain that type of relationship with her. The screenshot below is just one of hundreds Ms. Angelova sent to Mr. Hammer.”

Brettler gave Law&Crime this screenshot, purportedly of that text exchange.

“We can talk and be friends but I can’t do that,” Hammer allegedly wrote, rejecting her. 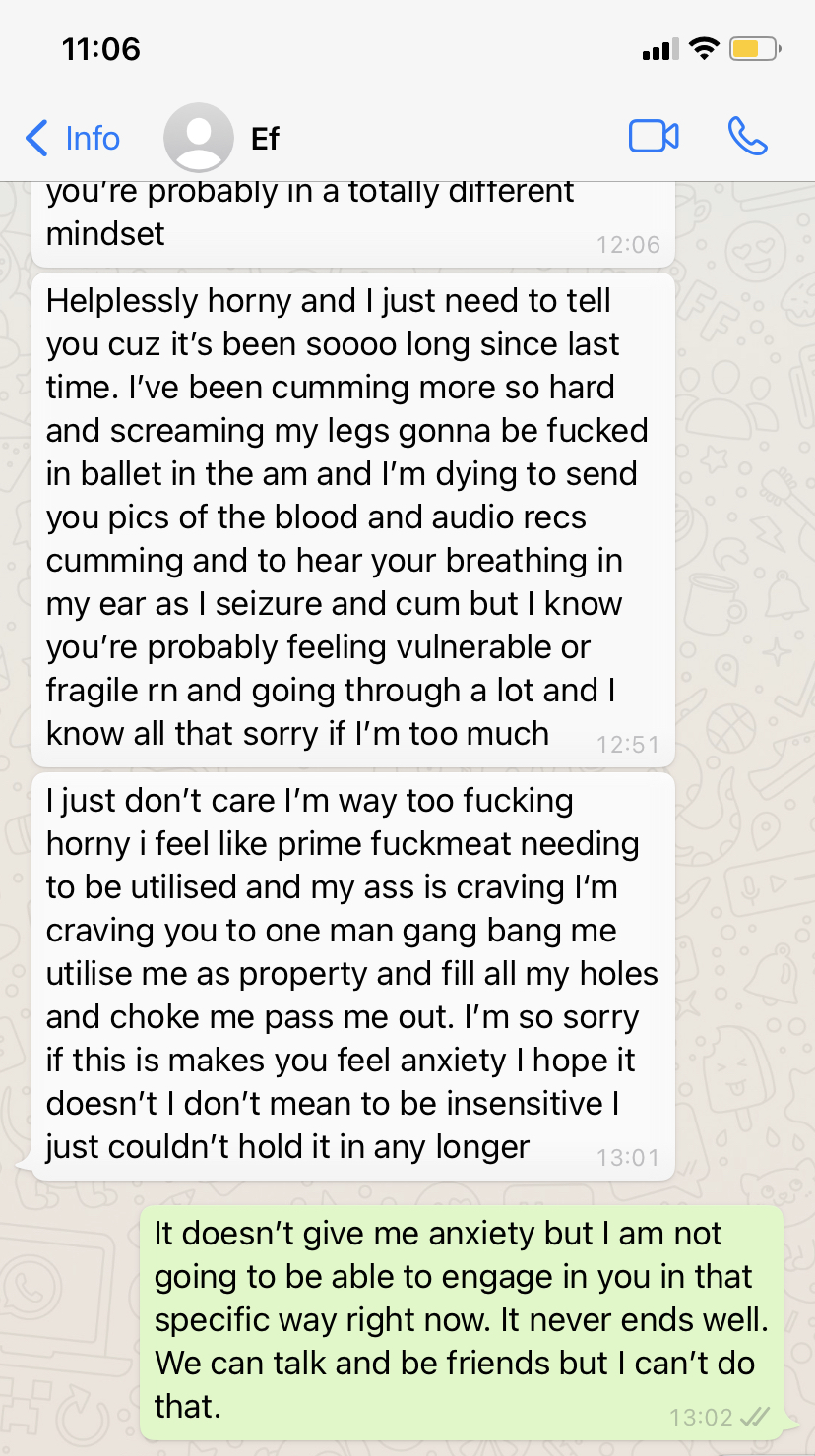 Allred said her client had an on-and-off relationship with Hammer from 2016 to 2020. Effie last interacted with the actor in 2020, she said. The attorney did not detail this encounter, but she said that by interaction, she included any communications that were electronic.

“It was never Mr. Hammer’s intention to embarrass or expose Ms. Angelova’s fetishes or kinky sexual desires, but she has now escalated this matter to another level by hiring a civil lawyer to host a public press conference,” Brettler said in a statement. “With the truth on his side, Mr. Hammer welcomes the opportunity to set the record straight.”

Once again, he asserted that encounters were consensual.

“From day one, Mr. Hammer has maintained that all of his interactions with Ms. Angelova — and every other sexual partner of his for that matter — have been completely consensual, discussed and agreed upon in advance, and mutually participatory,” he wrote. “Ms. Angelova’s attention seeking and ill-advised legal bid will only make it more difficult for real victims of sexual violence to get the justice they deserve.”

No charges have been announced.

“I challenge Armie Hammer to present all, not some, of his communications with Effie to the Los Angeles Police Department and answer all of their questions directly rather than through his lawyers,” Allred said, after Law&Crime requested comment about the text message exchange from 2020.