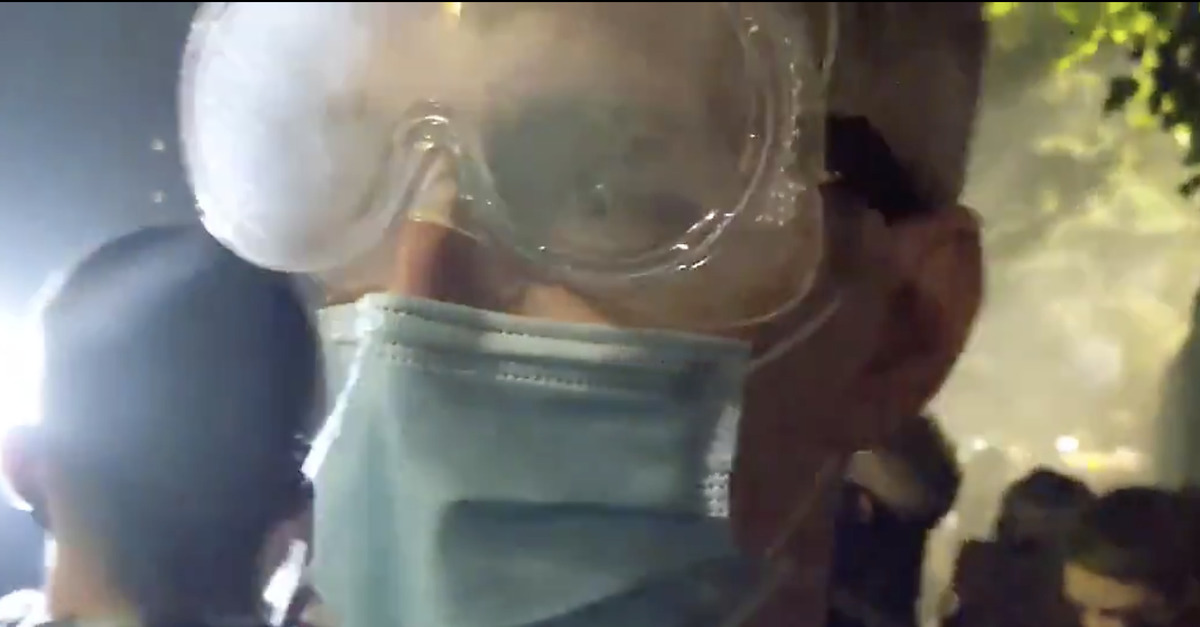 The situation in Portland has now escalated to include the tear-gassing of the city’s mayor, Ted Wheeler, in downtown Portland early Thursday morning.

The mayor of Portland, Ted Wheeler, was left coughing and wincing in the middle of the city on Wednesday night as federal officers deployed tear gas into a crowd of protesters he had joined. He denounced the officers for an “egregious overreaction.” https://t.co/fkKU3vZ4eN

Video posted by a New York Times correspondent shows Mayor Wheeler describing his experience on the streets of his city.

More disturbing than Wheeler’s account of the physical effects of being tear-gassed, however, was his take on the situation as a whole.

“I can tell you with 100% honesty I saw nothing that provoked this response,” Wheeler told the camera.  He continued to call the use of tear gas “an egregious overreaction on the part of the federal officers” and said “there is nothing that I saw here that warranted this reaction.”

Wheeler criticized the federal officers, saying that their use of force is “not a de-escalation strategy,” but rather “is flat-out urban warfare.” Wheeler pointed a finger directly at Donald Trump, saying that “it’s being wrought on the people of this country by the president of the United States and it has to stop right now.”

Wheeler, who has been dealing with nearly two months of protests and demonstrations sparked by the killing of George Floyd, knew tear-gassing was a possibility. He announced to the crowd Wednesday that he would be with them as protesters faced off against federal officers sent into the city by the Trump administration.

#Portland Mayor Ted Wheeler has made it out of the corner of this protest and into its beating center. He tells he crowd if they get tear gassed tonight, then he’s getting tear gassed tonight. Overhead, a government helicopter is circling. #PDXprotests pic.twitter.com/t4SgMfNL8L

On Wednesday night, those officers, dressed in camouflage and tactical gear, used tear gas to enforce boundaries set by a temporary fence.

To some, Wheeler’s being on the receiving end of tear gas is somewhat karmic. Many protesters have labeled him “Tear Gas Teddy,” referring to the Portland police department’s own highly-criticized use of tear gas.

Tonight “Tear Gas Teddy” went from being a nickname to being an instruction. The simp man got a taste of his own medicine. Good shit

What’s this I hear? Tear Gas Teddy @tedwheeler will be standing on 3rd and Morrison tonight at 8PM to be booed out of his own town? Well, I can’t miss that..

Wheeler, as Portland’s mayor, is also the city’s police commissioner.

Correction: the mayor is HERE. Surrounded by media and protesters who are not thrilled to see him. You can barely hear him over the roar of #BlackLivesMatter chants and people shouting at him to resign. A fun #Portland fact: Here, the mayor is also the police commissioner. #PDX

Some protesters mocked the mayor, asking him how it felt to be tear gassed.

“How does it feel, Teddy?” someone shouts. pic.twitter.com/4VPOKcOIII

Wheeler, who is running for reelection, told press that his experience Wednesday night has changed his view on the use of tear gas generally.  “I don’t think we should use these tools at all,” Wheeler said. “It makes me think long and hard about whether this is really a viable tool. I want to look at other options. This is not a good option.”