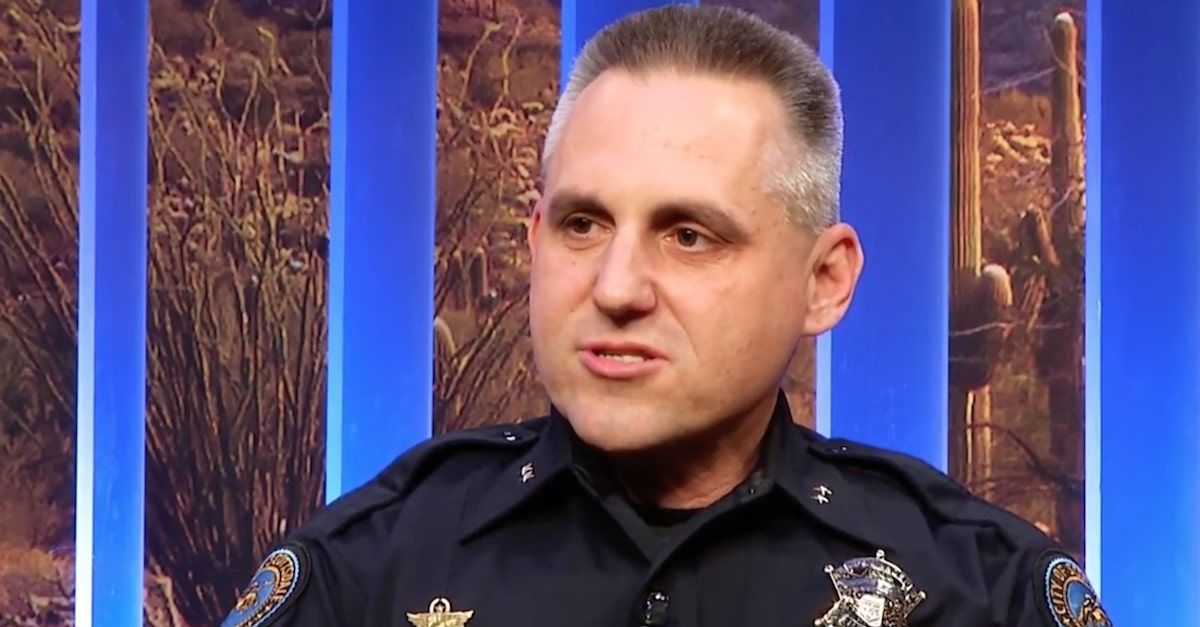 Two Scottsdale police sergeants who shot a mentally ill man in the back, paralyzing him and injuring his baby in 2008, faced no formal discipline for their actions. Rather than punish James Dorer and Rich Slavin, the officers who shot David Hulstedt in his home following a 911 call, the city of Scottsdale reached a $10 million settlement with Hulstedt’s family following a federal lawsuit. Thereafter, the officers would be promoted.

Hulstedt, a paranoid schizophrenic, came home on Nov. 8, 2008 following a meeting with his psychiatrist and then called 911, demanding to speak with the governor. Officers Dorer and Slavin arrived on the scene, along with officer Daniel Greene, the Phoenix New Times reported.

They then attempted to negotiate with Hulstedt, who was holding his 2-year-old daughter. Police claimed that Hulstedt threatened to “pile-drive” his daughter. Slavin and Dorer then went into the house, told Hulstedt to put the child down, and shot him in the back. Four shots were fired (two by each officer) and three of the bullets hit. The officers then reportedly dragged Hulstedt on his knees for 400 feet. A judge ruled in 2012 that this constituted excessive force.

Greene, following the shooting, reportedly told other officers that Hulstedt’s daughter was bleeding and that it looked like Hulstedt had “smashed her face.” A video of the incident directly contradicted what Greene said, prompting District Judge G. Murray Snow to reprimand him for “making a false statement in an official departmental interview.”

That said, following the incident, neither Dorer nor Slavin faced any disciplinary action from the police department. Greene still works for the department as a detective. Slavin continued his career, eventually being named the assistant chief of Scottsdale police in 2018. And, Dorer retired in 2012, leaving the department on good terms.

Following the high-profile dismissal of Daniel Pantaleo–the NYPD officer who used a banned chokehold that triggered Eric Garner’s deadly asthma attack five years ago–many have questions regarding the lack of consequences for officers in similar situations. Even in cases in which officers were fired from their job, as in the shooting of Philando Castille and the shooting of Daniel Shaver, both officers were acquitted of second-degree manslaughter and second-degree murder, respectively.

There have been other cases, however, where officers were prosecuted for fatal shootings and convicted of murder (see: Jason Van Dyke and Michael Slager).

Pantaleo, for his part, appears prepared to appeal his firing. It’s been reported that the odds of a successful appeal are low.