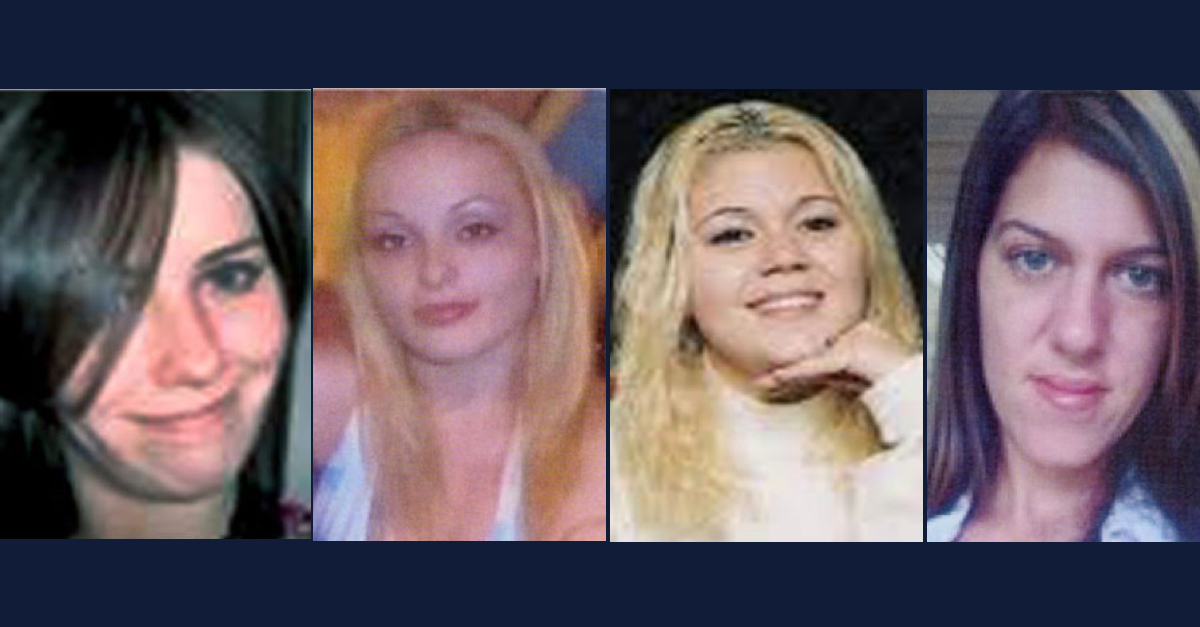 (L-R): Maureen Brainard-Barnes, Melissa Barthelemy, Megan Waterman, Amber Lynn Costello, the women known as the “Gilgo Four” whose bodies were found on a remote Long Island beach in December 2021. They were last seen on dates between 2007 and 2010 and are believed to be the same victims of a serial killer. (Pictures via the Suffolk County (New York) Police Department.)

Police in New York state have released new information about four women who are believed to have been the victims of a serial killer on Long Island who targeted sex workers.

Maureen Brainard-Barnes, Melissa Barthelemy, Megan Waterman, and Amber Lynn Costello are known as the “Gilgo Four”—murder victims who were found across a quarter-mile area on the side of Ocean Parkway on Long Island, New York.

Their bodies were discovered in December 2010 during the search for the remains of Shannan Gilbert, a 23-year-old sex worker living in Oak Beach when she disappeared. According to police, Gilbert was last seen running through the gated community of Oak Beach after leaving the home of a client.

The search for her led to the grim discovery of multiple possible victims in the Gilgo Beach area of the Ocean Parkway. In addition to the Gilgo Four, police discovered partial remains belonging to Jessica Taylor in 2011, as well as the remains of Valerie Mack.

Police also discovered a female toddler, a woman believed to be the toddler’s mother, and an Asian male who has not been identified.

“As the Homicide Squad continues its tireless work on this investigation, we believe now is the right time to disseminate this previously unreleased information in hopes of eliciting tips from the public and providing greater transparency about the victims,” Suffolk County Police Commissioner Rodney K. Harrison said in a press release announcing the newly-released information.

The Gilgo Four: Police Share Personal Details About Each Victim

Brainard-Barnes is believed to be the first victim of the Gilgo Four. According to police, she was 25 years old and living in Norwich, Connecticut, when she went missing after taking an Amtrak train to Manhattan in July of 2007. Police think she stayed at a Super 9 Motel in midtown, one of four hotels she regularly used to conduct sex work during visits to New York.

“At the time, Brainard-Barnes, who was 4 feet 11 inches tall, was working as a sex worker, advertising on Craigslist, Backpage and other websites,” the police said. “She was known to advertise under the names Juliana or Marie. Her routine was to travel to Manhattan for a few days to work as an escort, and then return home to Connecticut.”

Brainard-Barnes would occasionally travel with another female, also a sex worker, who used a different room at the same location, police said. That friend had traveled with Brainard-Barnes to New York that weekend, but went home early while Brainard-Barnes stayed behind. She was last heard from on July 9, 2007, when she called a friend in Connecticut at around 11:43 p.m. Police say she told the friend that she was going to meet someone outside of the motel on what’s known as an “out-call.”

Barthelemy, the second of the Gilgo Four, was reportedly last seen at her Bronx apartment in 2009. Police say she was 24 years old. Like Brainard-Barnes, she was relatively small, standing at only 4 feet 10 inches. She was also a sex worker who advertised online using an alias.

She was last seen on the night of July 12, 2009, when she told a friend that she was going to see a man and would be back in the morning. Cell phone records show Barthelemy traveled from the Bronx to Manhattan, most likely via taxi, police said. Her mother reported her missing on July 18, 2009.

In Barthelemy’s case, police believe that the person who killed her used her phone to call her family.

“After Barthelemy had been reported missing, her younger sister received a series of taunting phone calls from someone using Barthelemy’s phone,” Suffolk County police said. “These calls are believed to have come from the killer and were made from the area near the Port Authority Bus Terminal on 8th Avenue, and also from near Penn Station. These areas were thoroughly canvassed immediately following the calls, however, due to the large amount of pedestrian and vehicular traffic, no leads were developed.”

Barthelemy’s body was found on the north side of Ocean Parkway, near Gilgo Beach, on December 11, 2010. Although she was the first victim found, she is believed to be the second of the “Gilgo Four” to be killed.

Police believe the killer’s third victim was Waterman, who was 22 years old when she was last seen on June 6, 2020. She was also sex worker and advertised on Craigslist and Backpage under aliases. Police say she was last seen by her family on a commercial bus headed for New York.

In April, police released video of Waterman at a Holiday Inn Express in Hauppauge, New York. She is believed to have left that hotel at 1:30 a.m. on June 6, 2010 to meet a client. She was reported missing two days later.

“Family members felt it was unlike her not to call them to check on her then-3-year-old daughter,” police said.

Waterman’s body was found on December 13, 2010 on the north side of Ocean Parkway, near Gilgo Beach.

Unlike the other three victims, Waterman is believed to have had a pimp. Police say hew as arrested in 2012 and sentenced to three years in federal prison on sex trafficking charges. He is not believed to have participated in or had knowledge of Waterman’s murder.

The woman believed to be the fourth of the Gilgo Four victims is Costello, who was 27 and lived in West Babylon on Long Island.

“Costello was a heroin addict who lived at the house with another female and two men, who were also heroin addicts,” police said. “Costello, who was 4 feet 11 inches tall, and was a sex worker who advertised on Craigslist and Backpage to support her and her roommates’ heroin addiction.” Like the other victims, Costello used aliases.

Originally from Florida, Costello had completed a 28-day drug rehabilitation program, but police say she relapsed shortly before she disappeared.

Costello and her roommates shared a cellphone, and the female roommate was also a sex worker, according to police. The two male roommates were believed to have made arrangements for client “dates” with the women.

“When Costello would meet clients at her home, the two male roommates would often arrange a scam, during which, once a client had paid money, and before any sex acts occurred, they would confront the client saying Costello was their girlfriend and the client would flee,” police said.

Costello was last seen leaving her residence on foot on Sept. 2, 2010, to meet a client who was picking her up at her house.

“Costello did not have her cellphone with her at the time and she was never reported missing,” police said. She was found on Dec. 13, 2010.

Police say that despite the cold-case nature of the discoveries, they will not give up on finding who killed the Gilgo Four and the other victims found in the area.

Although not considered part of the Gilgo Four, Taylor and Mack were also sex workers whose remains were found in the area.

Police found partial remains for Taylor in March 2011 several miles east of where the Gilgo Beach Four were found. Other remains belonging to Taylor had been previously found in Manorville, New York, some 45 miles away from Gilgo Beach. Taylor, police say, also worked as an escort.

Mack was 24 when she disappeared while living in Philadelphia, police say. Like the others, she also worked as an escort under an alias. Police say that family members last saw Mack in the spring or summer of 2000 in Port Republic, New Jersey, and she was never reported missing. Partial remains were also found in Manorville.

At a press conference in April, Harrison announced a “completely revamped” Gilgo News website dedicated specifically to disseminating information about the investigation into the unsolved cases.

The website was updated “so that investigators can effectively release more information to the public in a timely manner,” Harrison said at the press conference.

“The Suffolk County Police Department remains committed to seeking justice for the victims in these cases,” a press release said, noting that the reward for information leading to an arrest was recently increased from $25,000 to $50,000.