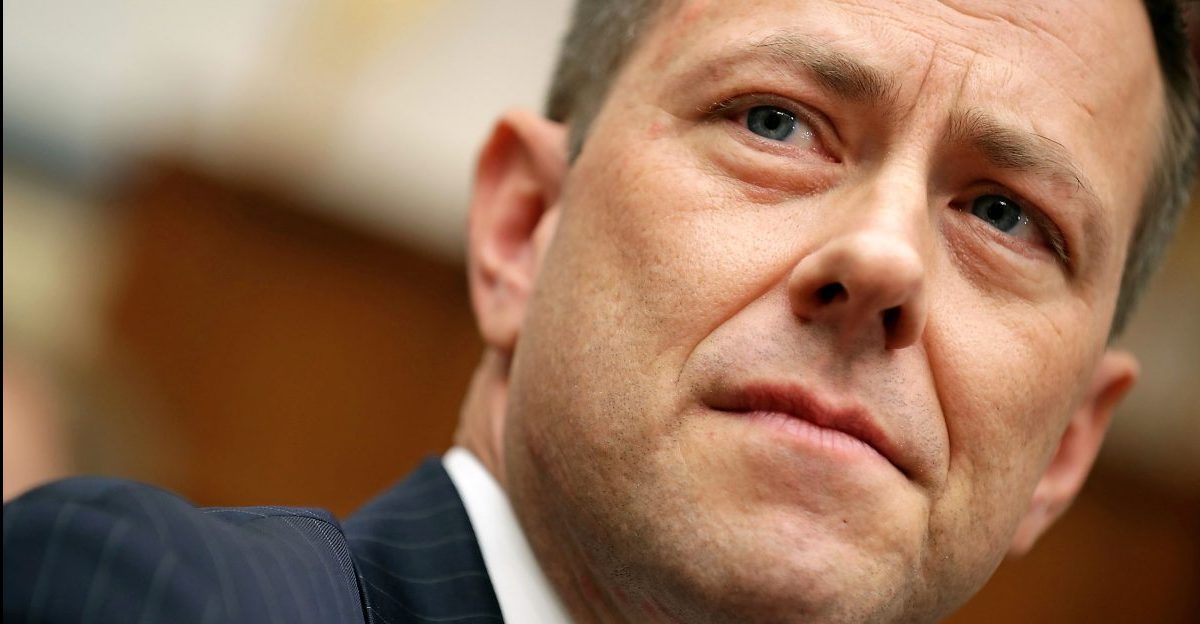 Fired FBI counterintelligence agent Peter Strzok, fresh off of a procedural win against the Department of Justice in a lawsuit over the release of his text messages with former FBI lawyer Lisa Page, has through his lawyer inserted himself into the never-ending Michael Flynn case.

In a letter on Monday to U.S. District Judge Emmet Sullivan, Strzok lawyer Aitan Goelman took issue with exhibits that Flynn’s lawyers filed as a supplement to their stance that the criminal case against Flynn should be dismissed. Those documents, which again included Strzok’s texts, also included Strzok’s notes. According to Goelman, “some” of Strzok’s notes “appear to have been altered.”

“On at least two occasions, there were handwritten additions, not written by Mr. Strzok, inserting dates, apparently designed to indicate the date or dates on which the notes were written,” Goelman began. “On at least one occasion, the date added is wrong and could be read to suggest that a meeting at the White House happened before it actually did.”

The attorney said that Team Flynn included texts that were wholly irrelevant to the Flynn case and the Department of Justice.

“I’m attaching to this letter a copy of these two pages of notes, with highlighting to indicate the handwritten notations that Mr. Strzok did not write,” the letter went on.
“I also note that the texts of Mr. Strzok’s that were attached to the defendant’s pleadings include portions that had not previously been released and have nothing to do with the Flynn case or, more broadly, with the Department of Justice.”

Goelman ended by saying Flynn’s filing “appears to violate the Court’s Order not to file any additional supplements to pending motions until the governments ‘Brady‘ production is complete.”

These were the documents Goelman highlighted: 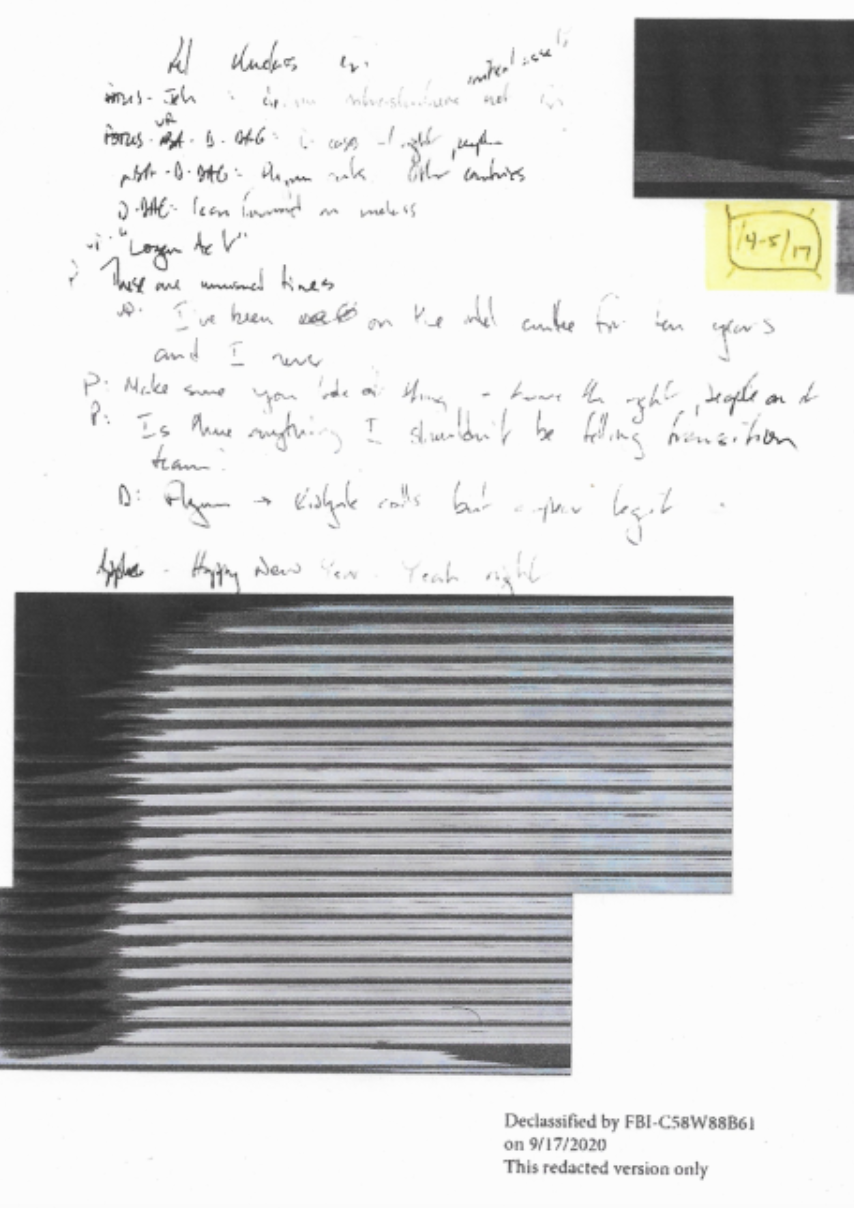 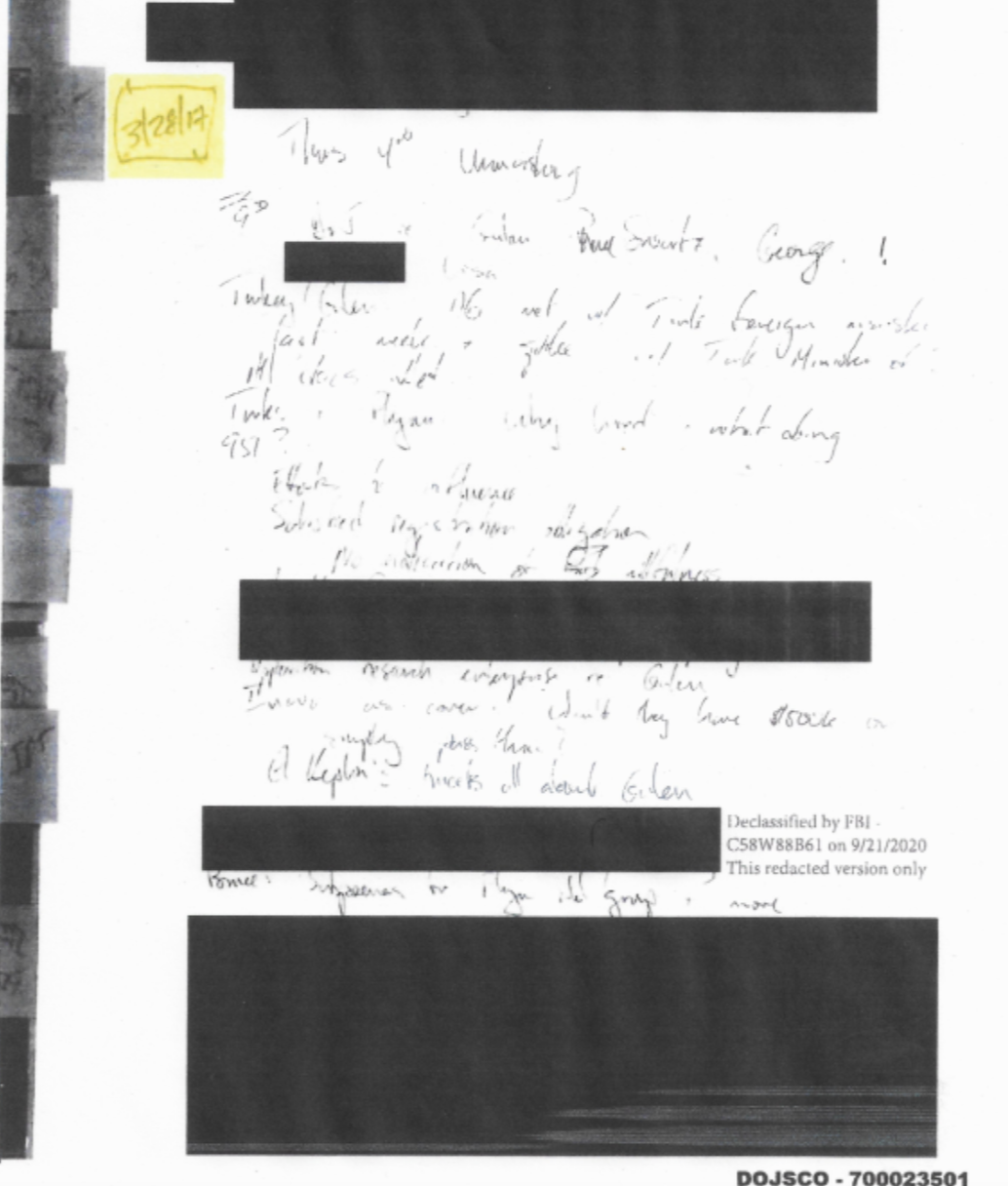 On Sept. 24, Flynn’s lawyers Sidney Powell and Jesse Binnall filed the documents in question, claiming that they were evidence of “outrageous, deliberate misconduct by FBI and and DOJ—playing games with the life of a national hero.” Per that filing:

Late last night, the Government produced yet another tranche of documents—its fifth production of exculpatory evidence since April of 2020, and its third since filing its massive Motion to Dismiss. ECF Nos. 198, 231, 237. According to the Government’s production correspondence:“The documents include handwritten notes of former Deputy Assistant Director Peter Strzok (23501 & 23503) and former Deputy Director Andrew McCabe (23502); and internal text messages between FBI analysts who worked on the Flynn matter (23504- 23516); . . . additional text messages between former DAD Strzok and Lisa Page (23516-23540).” The 41 pages of additional evidence demonstrate (i) his innocence; (ii) the absence of any crime; (iii) government misconduct in the investigation of General Flynn; and (iv) continuing prosecutorial misconduct in the suppression of evidence favorable to the defense in violation of Brady v. Maryland and this Court’s Brady order. ECF No. 20.

These documents provide information long known to the agents and others at the highest levels of the Department of Justice and the FBI; information long concealed by the Special Counsel and FBI. This evidence shows outrageous, deliberate misconduct by FBI and DOJ—playing games with the life of a national hero. It negates multiple essential elements required for the prosecution of a false statement offense and any “offense” even considered in relationship to Flynn Intel Group’s review of open source information regarding Fethullah Gulen and the Muslim Brotherhood.

Disappointed to see the undisclosed addition of handwritten dates in copies of my notes DOJ turned over to Flynn's defense team, including a misleading perception helpful to the defense.

Hoping they told the Court, because it was a surprise to me. https://t.co/US2oi6FR0U

“Disappointed to see the undisclosed addition of handwritten dates in copies of my notes DOJ turned over to Flynn’s defense team, including a misleading perception helpful to the defense,” he said. “Hoping they told the Court, because it was a surprise to me.”

You can read the Strzok exhibits below:

DOJ exhibits in Michael Flynn case by Law&Crime on Scribd