Attorneys for former National Security Advisor Michael Flynn filed an almost entirely redacted email late Monday in a bid to bolster their case that the federal criminal case against their client should be dismissed by the defendant’s trial judge.

“Until this case is dismissed with prejudice, the government has a continuing obligation to provide to the defense all evidence that is exculpatory of General Flynn, establishes misconduct by the government in its many capacities that contributed to this wrongful prosecution, or otherwise is favorable to the defense,” attorneys Jesse Binnall and Sidney Powell wrote in the supplementary filing.

Flynn’s defense goes on to cite the constitutional protection encapsulated in the longstanding Brady Rule which holds that the government must provide criminal defendants with exculpatory evidence favorable to them. Such “Brady material” is constitutionally-mandated information that prosecutors are expected to hand over to the defense. The rule–frequently violated by police and prosecutors across the country–is an extension of the 14th Amendment’s Due Process Clause and is named after the landmark 1963 U.S. Supreme Court case of Brady v. Maryland which established the right.

“The defense has a continuing obligation to make a record that mandates this dismissal,” the brief filing goes on to note. “Consequently, General Flynn is supplementing the record in support of the Government’s Rule 48(a) motion and his consent to dismiss with a production he recently received from the Government, which is attached hereto as Exhibits A and B. The Government consents to the filing of the exhibit, as produced.”

The exhibit itself is an email from former Federal Bureau of Investigation (FBI) lawyer Kevin Clinesmith sent to a person whose identity has been redacted.

The two-page email contains three phrases that are not redacted–but which are each interrupted by at least one paragraph’s worth of censorial effort apiece.

“CROSSFIRE HURRICANE,” one phrase reads–in all capital letters–referring to the general counterintelligence investigation into the Trump 2016 presidential campaign.

The third substantive phrase is a standard legal document reference to a “PROTECTIVE ORDER,” which is, again, all capitalized in the original document.

The redactions are substantial: 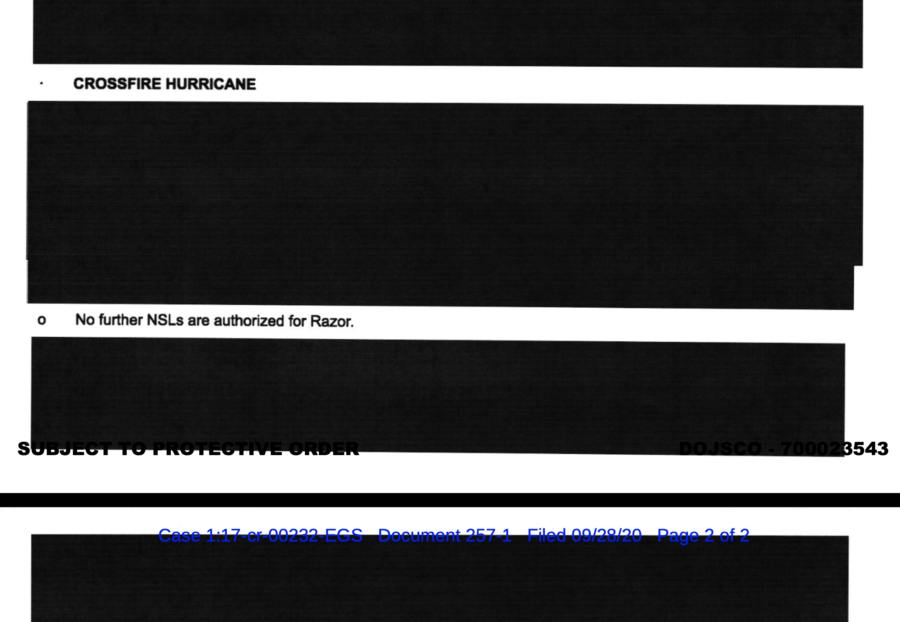 The email also contains unredacted closing verbiage referring to the FBI’s email standards which identifies Clinesmith by his name and former formal title.

A second document filed on Monday by Binnall and Powell is titled: “[Redacted] Summary of National Security Letters Issued in CROSSFIRE RAZOR” and contains a recently-declassified run-down of seven such letters filed “pursuant to the Electronic Communications Privacy Act” with regard to Flynn’s alleged international contacts.

Compiled in serial fashion, the letters are described in general terms and outlines the basic thrust of each as follows:

One NSL, authorized on February 2, 2017, sought subscriber and toll billing records for a telephone number associated with Michael T. Flynn for the period from July 1, 2015 to the present.

A seventh NSL, issued on March 7, 2017, sought subscriber and transactional information for a telephone number associated with Michael T. Flynn from December 21, 2016, to January 15, 2017.

The filing, largely pro forma at this point in the long-running Trumpworld passion play that has pitted Flynn and his supporters against U.S. District Judge Emmet Sullivan, was somewhat overshadowed by a late Monday filing by an attorney representing former FBI agent Peter Strzok.

In that filing, Strzok’s attorney alleges that Flynn’s defense team “appears to have” altered “some” documents which were previously submitted to support the defendant’s innocence. Those documents are allegedly handwritten notes penned by the former FBI agent.

The second filing also alleges that Flynn’s attorneys have violated a court order regarding the timing of public transmission of Brady materials.

Read Flynn’s filing in full below: