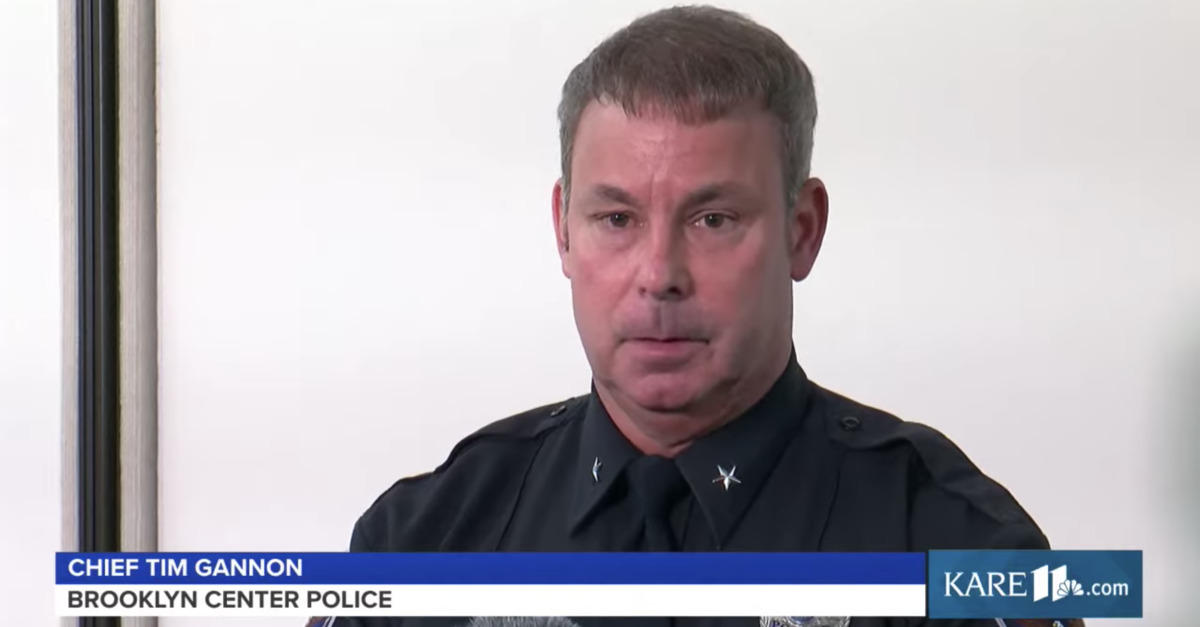 The police chief for the Minnesota city where police shot 20-year-old Daunte Wright, an unarmed Black man, during a traffic stop on Sunday claimed that the killing happened because the officer mixed up her Taser with her gun, igniting outrage and skepticism on social media.

“As you can hear, the officer while struggling with Mr. Wright shouts ‘Taser, Taser’ several times,” Brooklyn Center Police Chief Tim Gannon told reporters on Monday, after releasing a portion of the police bodycam footage from the shooting. “That is part of the officer’s training prior to deploying a Taser, which is a less-lethal device. That is done to make her partners aware, as well the subject, that a Taser deployment will be imminent.”

“During this encounter, however, the officer drew her handgun, instead of her Taser,” Gannon added.

The parallel incidents, in Minnesota cities less than 15 minutes away from each other by car, led to massive protests and an unsuccessful motion by Chauvin’s lawyer to sequester the jury.

For some lawyers, celebrities, and journalists on Twitter, Gannon’s framing of what happened as an “accidental discharge” was implausible.

National security attorney Kel McClanahan questioned the efficacy of the police department’s statement on the shooting.

“The cop was too dumb to tell the difference between his gun and his taser” is definitely a…novel…argument.

Gannon, the police chief, floated the still-unnamed officer’s explanation during a Monday afternoon press conference unspooling body camera footage documenting the use of deadly force. A female police officer can be heard on the video shouting “Taser.”

Brief and graphic, the video shows the moments before and after the unnamed officer shouts out her intention to use force against the man whose family claimed had been pulled over for hanging air fresheners on his rear-view mirror (police claimed the stop was due to expired tags). Wright appears to shrug off an attempt at handcuffing and makes his way back into his car, as a female officer can be heard saying that she will “tase” him. She repeatedly shouts the word “Taser,” before apparently firing into Wright’s midsection.

“Holy shit,” the officer can be heard saying. “I just shot him.”

Wright and Floyd died just 11 miles away from each other.

Though police called the shooting “accidental,” racial justice activists and others have noted that this rationale has frequently when Black men and women have died at the hands of police.

These are not accidents. THIS IS MURDER. https://t.co/ywHiwYLQW0

“Accidental discharge.” When I covered LAPD killing of Charly Keunang, I found a “mistake,” too: one cop thought Charly had his gun when it was actually another cop’s hand—& Charly was killed. Such “accidents” are inevitable result of modern policing. It’s how the system works.

Can anyone be shocked that once again the police finding any excuse to make a murder sound like an “accident” ? 🙃

An “accidental discharge” that kills someone has another name: manslaughter.

Re-allocate police funding to unarmed traffic forces to remove even the possibility of state-sanctioned manslaughter. https://t.co/AbZ4NcwCC0

Gannon’s critics cast the press conference as an attempt exculpate his officer in advance of a full investigation.

That the Brooklyn Center Police Department few a Thin Blue Line flag, defended by some police as a symbol of professional pride but sometimes flown by white supremacists, has only amplified those concerns.

“This was an accidental discharge that resulted in the tragic death of Mr. Wright” https://t.co/zXIoQcI4Aw

The investigation of Wright’s killing will be out of Gannon’s hands.

“I have asked the [Bureau of Criminal Apprehension] to conduct an independent into this shooting and death,” Gannon continued, referring to the same agency that took over the Floyd investigation. “Once they are completed, I expect they will submit their findings, independent of me, to the appropriate authorities, the appropriate attorneys, who will review this case.”