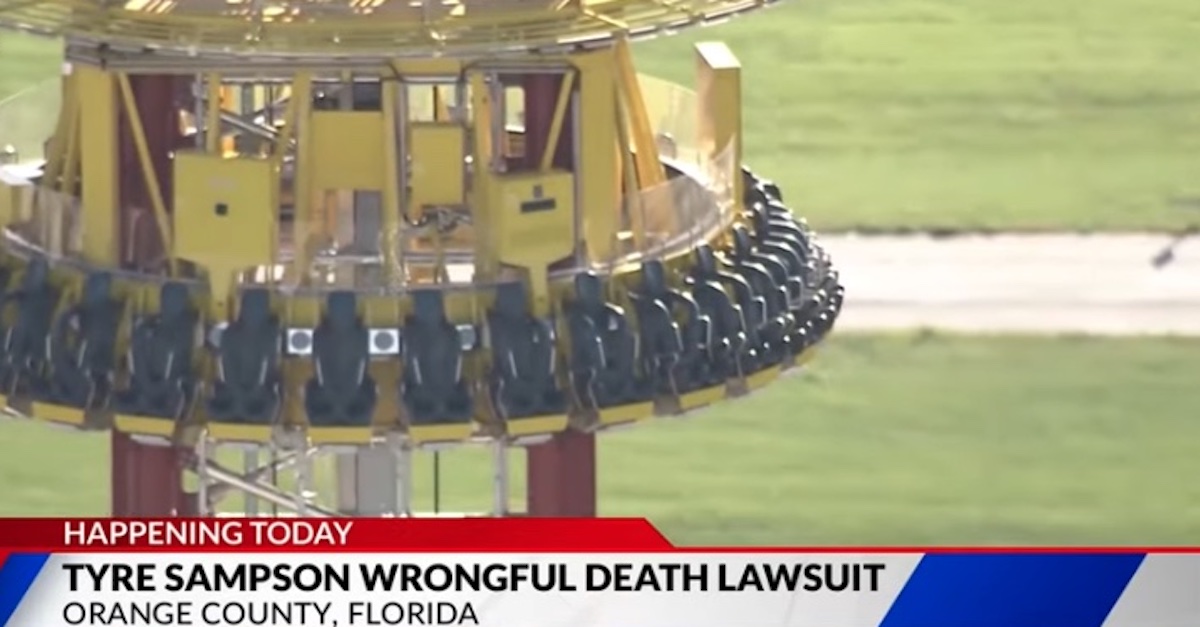 The parents of the 14-year-old boy who died after falling from an amusement park ride in Florida have sued the park and the manufacturer of the ride, blaming both for their son’s death.

Nekia Dodd and Yarnell Sampson filed a 65-page lawsuit on Monday alleging negligence and strict liability in the death of their son Tyre Sampson, who died after falling around 100 feet from the Free Fall attraction at Icon Park in Orlando.

Dodd and Sampson are suing Icon Park as well as the businesses behind the Free Fall ride, including owner and operator Extreme Amusement Rides and manufacturer Funtime Handels, an Austrian company.

A report from the Florida Department of Agriculture and Consumer Services (FDACS) says that Tyre appears to have slipped from his seat as the ride was descending, although the harness attached to the seat was still in place. The report determined that a harness sensor in Tyre’s seat was “manually loosened, adjusted, and tightened to allow a restraint opening of near 7 inches.”

According to the report, the average seat opening for the ride was 3.33 inches.

“The cause of the subject accident was that Tyre Sampson was not properly secured in the seat primarily due to mis-adjustment of the harness proximity sensor,” the report concluded. “The mis-adjustment of the sensor allowed both safety lights to illuminate, improperly satisfying the ride’s electronic safety mechanisms and allowing the ride to commence even though the ride was unsafe.”

“We are deeply troubled that the preliminary findings of the State’s investigation, released today, indicate a sensor on the Orlando FreeFall attraction, which is owned and operated by the SlingShot Group, had been mis-adjusted after the sensor was originally secured in place,” Icon Park said in a statement following the release of the FDCAS report. “Icon Park is committed to providing a safe, fun experience for families. We will continue to support the Florida Department of Agriculture and Consumer Services with their ongoing investigation.”

Dodd and Sampson’s complaint says that the ride did not warn riders about height and weight restrictions.

The complaint lists more than 50 ways in which it alleges Icon Park was negligent, including failing to train its employees to operate the ride safely. The park also failed to take reasonable steps to ensure riders were secure in the seats, didn’t warn potential riders about height and weight restrictions, and didn’t fire rider operators who didn’t follow procedures for keeping riders safe.

As to the Austrian company that made the ride, the complaint says that a “reasonable manufacturer, constructor, distributor, designer, and supplier” would have provided more visible warnings as to height and weight restrictions, installed a secondary safety system other than the harnesses, made sure the ride wouldn’t operate if all the riders weren’t properly secured, and added other measures including a monitoring system and a mechanism to stop the ride if a rider wasn’t secure.

“The Free Fall ride was dangerous to an extreme beyond that which would be contemplated by the ordinary user with the ordinary knowledge common to the community as to the free Fall’s characteristics,” the complaint said.

“The defendants in Tyre’s case showed negligence in a multitude of ways,” attorney Ben Crump said in a statement posted to his law firm’s website. “One of the most glaring examples was failing to provide a $22 seatbelt on a ride that cost several million dollars to construct. From the ride and seat manufacturers and the installer to the owners and operators, the defendants had more than enough chances to enact safeguards, such as seatbelts, that could have prevented Tyre’s death. They didn’t, and their poor decisions resulted in deadly consequences for a promising young man and lifelong pain for his family. We will hold these defendants accountable for their failures so that a tragedy like this never has to happen again.”

Tyre, an honor-roll student and football player, lived with his mother in Missouri. He had gone to Florida for spring break with a friend’s family, Dodd said on a GoFundMe page. He had just left for the trip the day before he died.

“Despite his prowess on the football field, he was known as a kind-hearted person who cared about others,” the complaint says. “Tyre had a long and prosperous life in front of him that was cut short by this tragic event.”

Dodd and Sampson are seeking damages under the state’s wrongful death statute, including loss of Tyre’s earnings, medical care and funeral costs, and mental pain and suffering.