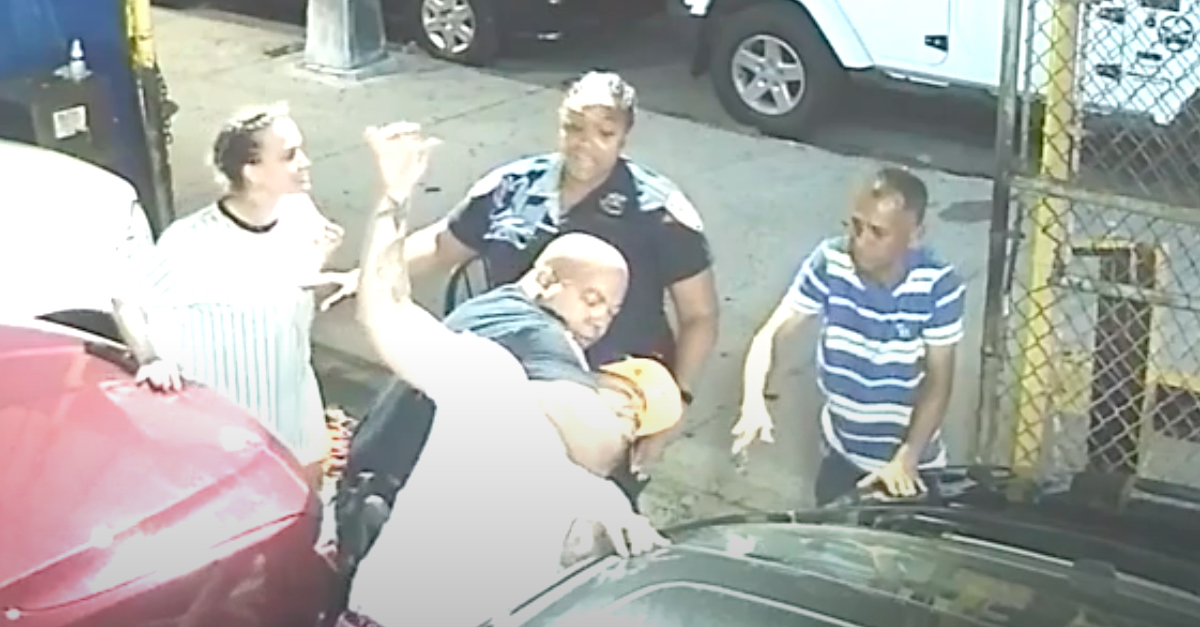 A detective with the NYPD who was caught by a security camera violently using what’s being widely called a “banned” chokehold and a Taser to subdue a suspect while responding to a noise complaint will not face a departmental disciplinary trial and will instead enter retirement, albeit with a slimmer wallet, the New York Daily News reported Friday evening.

According to the report, Det. Fabio Nunez chose to retire and forfeit his accrued overtime and vacation hours at the “insistence” of Police Commissioner Dermot Shea — all because of the encounter.

Nunez had initially been scheduled to face internal excessive force charges for his role in the violent July 14, 2018 encounter, but then reached a deal with NYPD administrative officials that would have placed him on dismissal probation for one year and resulted in the loss of 30 vacation days before Shea stepped in.

Nunez’s attorney, James Moschella, told the Daily News that the terms of his retirement will cost him at least $10,000. The Gothamist reported that the NYPD appeared to have allowed Nunez to retain his pension.

A 21-year veteran of the department, Nunez was responding to a noise complaint outside a car dealership in Washington Heights when he and another detective told a group of people to lower the volume of the music they were playing. When a member of the group, Thomas Medina, walked away, Nunez followed close behind, grabbing him by the back of the neck and pushing his face onto a nearby vehicle. When he tried to cuff Medina, the man pulled his arm away and Nunez immediately wrapped his arm around Medina’s throat and put him in a chokehold for a little more than 20 seconds. He then fired a taser at the man.

Medina told the Daily News that he was happy with the outcome and with the fact that Nunez “will no longer have a weapon and badge to go around the streets abusing people for no reason, as he did with me.”

According to a 2019 Gothamist report, Nunez had several similar encounters in the past that resulted in the NYPD settling five lawsuits for his alleged misconduct. Despite those settlements causing taxpayers to shell out more than $220,000 over fifteen years, Nunez was promoted to Neighborhood Coordination Officer in 2015.

Legal Aid Society attorney Molly Griffard, who represented Medina in a civil rights lawsuit against Nunez and the NYPD, said she hoped the result sent a message to current officers that “the use of chokeholds and Tasers will not be tolerated and that there will be actual consequences for engaging in such misconduct.”

Paul DiGiacomo, the head of the Detectives’ Endowment Association, maintained that Nunez didn’t do anything wrong.

“Although he adamantly denies ever using a prohibited chokehold, as alleged, he opted to retire, as so many other officers have done this past year who feel they have been disrespected and scapegoated one too many times,” DiGiacomo said. “He leaves behind an outstanding record of keeping the citizens of New York safe.”

The NYPD’s usage of chokeholds reached a tipping point in 2014 when then officer Daniel Pantaleo used a similar move while arresting Eric Garner, who was suspected of selling single cigarettes, and resulting in Garner’s death. Garner could repeatedly be heard saying “I can’t breathe” during the struggle.

The New York City Council last year passed a law making it a criminal offense for officers to use chokeholds when trying to arrest suspected criminals.