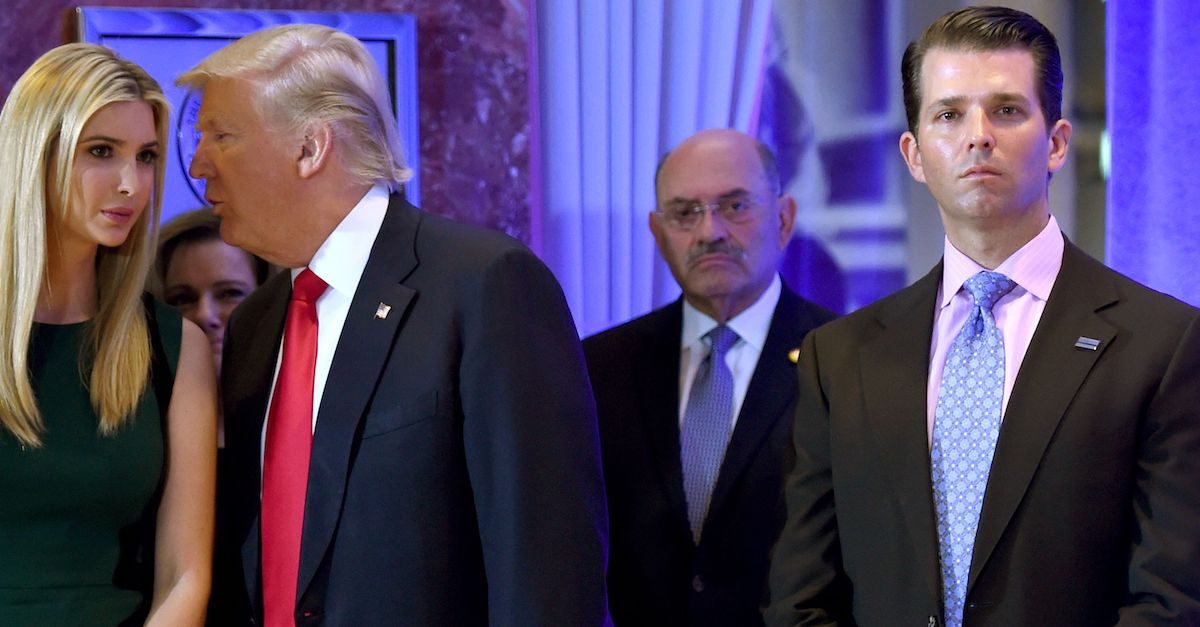 Prosecutors in the New York Attorney General’s office tasked with investigating former President Donald Trump’s private business have reportedly opened a criminal investigation into the Trump Organization’s chief financial officer, a longtime confidant whose relationship with the family’s business dates back nearly half a century.

The New York Times on Wednesday reported that the office of Attorney General Letitia James (D), which had previously only been pursuing only a civil investigation, notified the Trump Organization in January that it had also opened a criminal probe into the company’s Chief Financial Officer, Allen Weisselberg. “People with knowledge of the matter” told the Times that investigators were focusing on possible unpaid taxes stemming from fringe benefits paid to Weisselberg in the form of cars and private school tuition for his grandchildren.

Fringe benefits are a form of compensation companies give to employees that are generally taxable unless specifically exempted by the IRS.

James’s investigation appears to be running parallel to the criminal probe of the Trump Organization that has been overseen by Manhattan District Attorney Cy Vance for more than a year.

The two offices recently joined forces in their Trump-related investigations, sources “with knowledge of that effort” told the Times, with James sending two assistant AGs to join Vance’s team.

“We are now actively investigating the Trump Organization in a criminal capacity, along with the Manhattan D.A.,” James’s office confirmed to Law&Crime on Tuesday.

It was reported last week that Vance’s office issued a subpoena to Columbia Grammar & Preparatory School on the Upper West Side of Manhattan, the elite private school attended by Weisselberg’s grandchildren.

That subpoena targeted the source of tuition payments made between 2012 and 2019, according to the Wall Street Journal. Over $500,000 worth of tuition during that time frame was paid for through checks signed by Trump or Weisselberg.

Jennifer Weisselberg, ex-wife to Allen Weisselberg’s son Barry Weisselberg, confirmed the lofty tuition amounts–and the source of those funds–to the Journal. Knowledge of the subpoena itself was attributed to two anonymous “people familiar with the matter.”

“Ms. Weisselberg said she told Manhattan prosecutors that she and Barry understood the tuition payments to be part of her ex-husband’s compensation package at the Trump Organization, where he worked,” the WSJ reported. “Former prosecutors not involved in the probe said the Manhattan district attorney’s office could be examining whether the Weisselbergs evaded taxes with the tuition-payment arrangement.”

Investigators in Vance’s office became increasingly focused on Weisselberg in recent months, likely hoping he can be pressured into cooperating with the investigation into possible tax, insurance, and fraud offenses.

Weisselberg, who first started working as an accountant for Fred Trump in the 1970s and more recently helped Donald Trump Jr. and Eric Trump run the business during their father’s term in office, could be the key to a prospective criminal case against the former president as he’s overseen the Trump Organization’s finances for more than two decades.

That notion was backed by Donald Trump’s niece Mary Trump, who in March said Weisselberg knows the Trump business empire as well as anybody.

“Weisselberg started working for my grandfather at Trump Management in Brooklyn in 1971 and most likely followed Donald to Manhattan in order to keep an eye on him. He knows close to everything,” she wrote.

[Image via Timothy A. Clary/AFP/Getty Images]