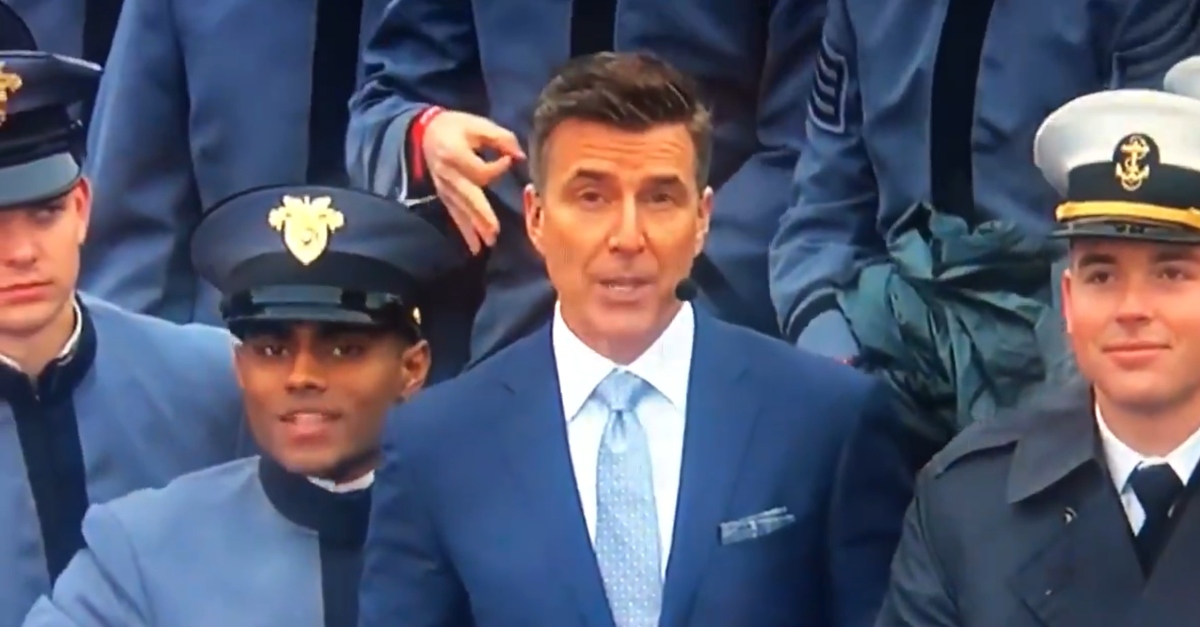 Spokespeople for the Army and Navy say the military is looking into whether cadets and midshipmen flashed apparent white supremacist hand gestures at the Army-Navy football game on Saturday.

“West Point is looking into the matter,” spokesman Lt. Col. Christopher Ophardt told The New York Times. “At this time we do not know the intent of the cadets.”

“We are aware and will be looking into it,” Naval Academy spokeswoman Commander Alana Garas told The Associated Press.

Some viewers interpreted a hand gesture featured at a broadcast to be a white supremacist symbol.

Please someone tell me I didn’t see what I thought I just saw? #ArmyNavy #ESPN white power sign? pic.twitter.com/QxL7dNmNKN

The “ok gesture” has taken on a new meaning in recent years, being linked to white supremacist ideology. According to The Anti-Defamation League, this started as a 4chan hoax that became reality when actual white supremacists started using it:

Ironically, some white supremacists themselves soon also participated in such trolling tactics, lending an actual credence to those who labeled the trolling gesture as racist in nature. By 2019, at least some white supremacists seem to have abandoned the ironic or satiric intent behind the original trolling campaign and used the symbol as a sincere expression of white supremacy, such as when Australian white supremacist Brenton Tarrant flashed the symbol during a March 2019 courtroom appearance soon after his arrest for allegedly murdering 50 people in a shooting spree at mosques in Christchurch, New Zealand.

If this is true — a USNA midshipman & a USMA cadet flashed white supremacy signs during national television broadcast at Army-Navy game today — discipline should be swift & absolute. What possible explanation exists for this? Short answer: There isn’t one. https://t.co/0E5YebvYzi