Michigan School Shooting Suspect Identified After Being Charged as an Adult 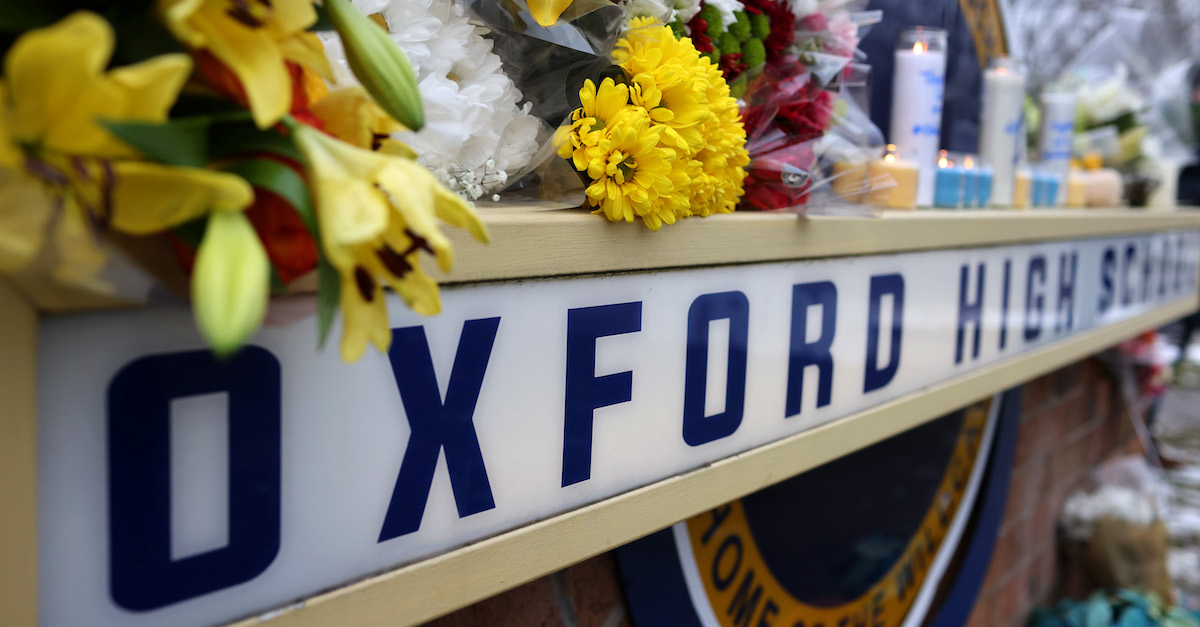 Flowers rest at a makeshift memorial outside of Oxford High School on December 1, 2021 in Oxford, Mich. On Tuesday, four students were killed and seven people were injured when a gunman opened fire at the school. The suspect, identified as 15-year-old Ethan Crumbley, has been charged as an adult with terrorism and first-degree murder. (Photo by Scott Olson/Getty Images)

A 15-year-old boy named Ethan Crumbley was been identified and charged on Wednesday in connection with the mass shooting at Oxford High School in Oxford Township, Michigan. The Tuesday rampage left at least four students dead and seven others injured.

According to the Oakland County Sheriff’s Office, Crumbley will be charged as an adult with one count of terrorism causing death; four counts of murder in the first degree; seven counts of assault with intent to murder; and 12 counts of possession of a firearm in the commission of a felony. Additional charges “may be forthcoming,” the agency noted, “pending the results of the full investigation.”

During a press conference, Oakland County Prosecutor Karen McDonald said law enforcement are “confident” they could prove the massacre was premeditated.

Ethan Crumbley, only 15, is identified as the accused shooter who killed four classmates at a Michigan high school. He had posted on Instagram just days ago a photo of his father’s gun, pretending it was his. Yet this didn’t raise any red flags? Sirens should have been blaring. pic.twitter.com/ySLdrdgPuq

While authorities say Crumbley’s intent was clear, the motive behind the shooting has so far proven elusive.

“The person that’s got the most insight and the motive is not talking,” Oakland County Sheriff Michael Bouchard said during his agency’s own separate press conference late Tuesday afternoon.

Bouchard also indicated that the defendant had obtained counsel.  Under U.S. constitutional law, the authorities cannot interrogate an individual who has clearly invoked his right to counsel about the matter for which he is being detained.

The sheriff echoed the prosecutor’s narrative regarding the availability of primary source materials being used in the investigation.

Bouchard said investigators were consulting electronic devices, “including his phone” and “looking at any potential documents” which may be “relative to some of his thoughts,” and noted that the different investigative threads were being “fanned out” to various “specialists.” The sheriff added that there was a “voluminous amount” of materials that are currently be used by law enforcement.

Bouchard also offered some insight into the shooting itself, saying that sheriff’s deputies eventually found 18 live rounds in one of the shooter’s pockets and a magazine. He noted that 30 spent shell casings had, so far, been recovered from the scene of the crime.

The sheriff attributed the school’s quick lockdown procedures to preventing the further loss of life.

In response to a question, Bouchard said that Crumbley was “brought into a meeting” with his parents at the school around 10 a.m. before returning to the “school area” when he then went into a bathroom, left, and then started shooting and killing his fellow classmates.

A separate meeting with school officials had occurred the day before, but there was no record of the alleged shooter ever being bullied or disciplined aside from those two meetings, the sheriff added.

“We have since learned that the school did have contact with the student the day before and the day of the shooting for behavior in the classroom that they felt was concerning,” Bouchard said. “In fact, the parents were brought in the morning of the shooting and had a face-to-face meeting with the school. The content of that meeting obviously is part of the investigation.”

The shooter was “apprehended in a hallway,” he added, and never went into any of the classrooms during the violence.

As Law&Crime previously reported, deputies responded to the active shooter call at around 12:55 p.m. Central Standard Time on the day in question. Quickly after their arrival, Crumbley was apprehended along with the 9 mm Sig Sauer used in the shooting.

Bouchard previously said the boy’s father bought him the gun last Friday but was unsure why. Crumbley had posted pictures of the gun and his shooting practice sessions online, the sheriff added.

A video arraignment is scheduled for later today, the sheriff said. Police have said they will request the defendant be transferred from a children’s lockup facility to the Oakland County Jail immediately.

McDonald, who identified the alleged assailant, made a point to note that she was only going to say his name once regarding the “tragedy at Oxford High School” because she wanted to focus on the victims.

“We have watched school shootings unfold in communities across this country for far too long,” she said. “Sadly, the national spotlight is shining today on our community, Oxford and Oakland County, as we face this tragedy together. This has touched all of us so deeply as a community and on a personal level as we look at our own families and imagine the unthinkable hitting home.”