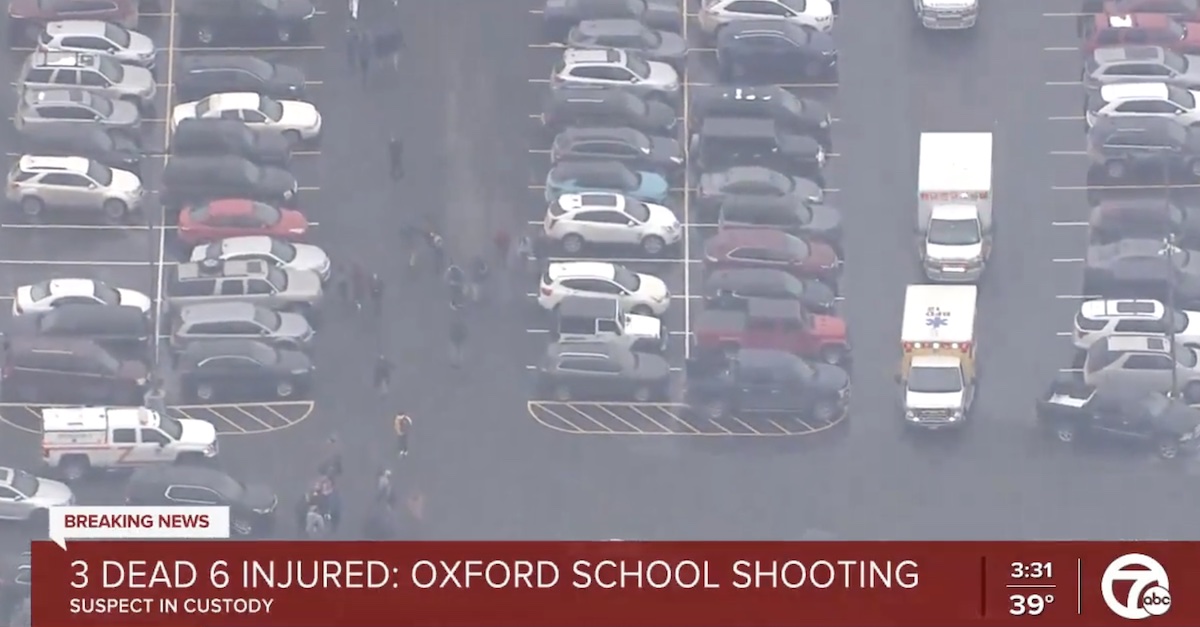 At least three students are dead and six other people are injured in a shooting on Tuesday at a high school in Oxford Township, Michigan, a suburb about 45 miles north of Detroit.

Deputies with the Oakland County Sheriff’s Office responded to a call around 12:55 p.m. CT reporting an active shooter at Oxford High School, according to a report by the Associated Press. After they arrived at the school, authorities apprehended the suspect and recovered a handgun.

A spokesperson for the sheriff’s office said that they believed there was only one shooter. The gunman was reportedly a 15-year-old sophomore. Authorities have not yet released his name or the names of the victims. The victims so far include three students who were killed, and at least one teacher and five students who were wounded.

The school was placed on lockdown, with students sheltering in classrooms until the police had searched and secured the premises. The students were later taken to a Meijer grocery store within walking distance from the school to be picked up by their parents.

In a news conference Tuesday afternoon, Oakland County Undersheriff Mike McCabe said that they had not yet determined the gunman’s motives, although they did believe he had acted alone. The suspect had invoked his right to remain silent and right to an attorney, said McCabe and had not provided any other information. According to the Detroit Free Press, the suspect was uninjured.

“It’s a very tragic situation, obviously,” said McCabe. He thanked Meijer for their assistance, noting that they had shut down the grocery store for them to use as a reunification center for students and their families, and said that the school had “done everything right,” with “everybody remain[ing] in place” and barricading themselves in the classrooms.

“You never want to prepare for something like this, but you have to, and the school district’s done a wonderful job,” McCabe added, mentioning upgrades that had been made to the doors at the school.

Police in Michigan now have a suspect in custody after at least four people were shot and injured with a handgun at Oxford High School.

More on The Story…
pic.twitter.com/f3DSzxf2aQ

Local reporter Mark Cavitt with The Oakland Press tweeted some additional updates, confirming the current casualty count of three dead, six injured, and reporting that the gunman fired between 15 and 20 shots within a five-minute period.

“My heart goes out to the parents who have lost their children and to the students, teachers, staff, and families reeling from the tragedy of a school shooting within their community. My department has reached out to local law enforcement to offer assistance as this investigation unfolds and I want to extend my sincere gratitude to first responders on the scene.

“We must act to properly address gun violence in our schools and the ongoing threat of another unconscionable tragedy if we continue to only offer thoughts and prayers. Our kids deserve better.”

.@MIAttyGen @dananessel released the following statement in response to a deadly shooting this afternoon at Oxford High School: https://t.co/HbPopHYb05 pic.twitter.com/seYxRdnQZx

This is a breaking news story and has been updated.