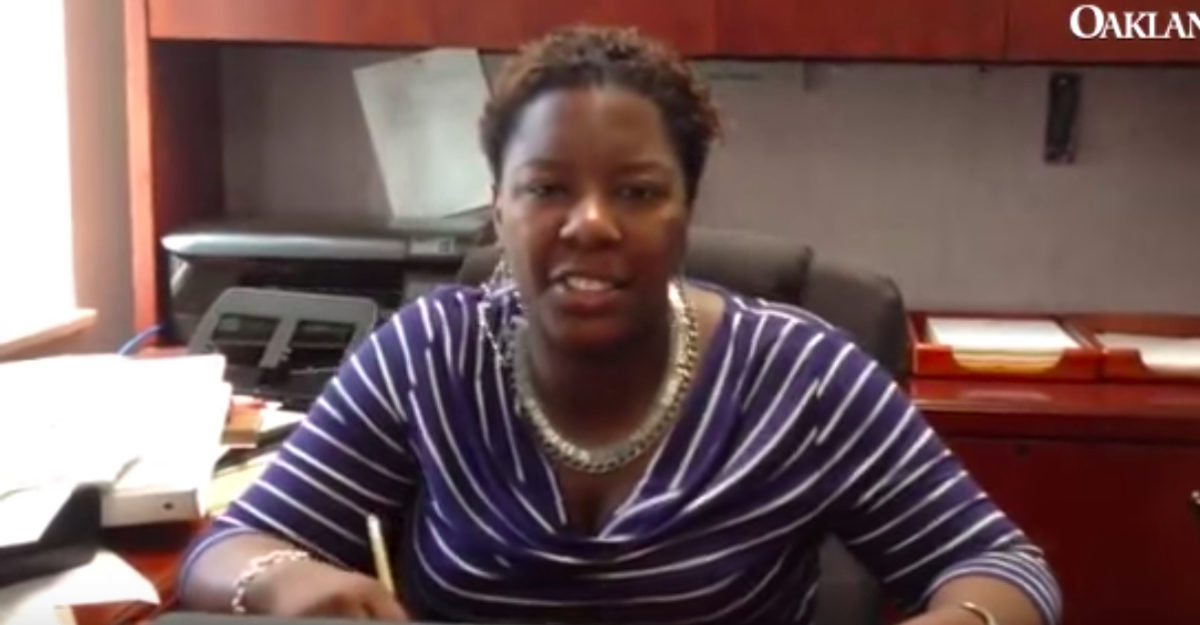 A Michigan election official on Monday was arrested on charges of voter fraud in connection with her oversight of the November 2018 election, much to the surprise and dismay of state Democrats.

Southfield City Clerk Sherikia L. Hawkins, 38, was charged with six felony criminal counts, including falsifying records, forgery of a public records, misconduct in office, and three counts of using a computer to commit a crime, according to a press release from the Michigan Attorney General’s Office.

Hawkins was praised just four months ago by the Michigan Democratic Party, and was a Dingell/Levin Award honoree.

Posted by Michigan Democratic Party on Saturday, May 18, 2019

An online bio says that Hawkins’s community involvement “demonstrates her strong commitment to the edification of all residents,” adding that she was recognized in 2017 by the Michigan Chronicle as a “40 under 40 award recipient.” Hawkins was further identified in the bio as an adjunct faculty member teaching political science at Oakland Community College.

State Democrats expressed their “shock” upon hearing the allegations against Hawkins.

According to the press release, Southfield voter count discrepancies were flagged by the Oakland County Clerk’s office while attempting to certify Southfield’s absentee ballots and forwarded to the Secretary of State’s office. After a thorough investigation, Michigan State Police determined that election records had been altered.

The charges, which are tied to “unauthorized and inaccurate changes” made to absentee ballots, were announced during a joint news conference by Michigan Attorney General Dana Nessel and Secretary of State Jocelyn Benson Monday afternoon.

“Voting is fundamental to the very essence of our democracy,” Nessel said. “Every citizen must know when they enter the ballot box that the vote they cast will count.”

Michigan’s Public Integrity Unit of the Department of Attorney General, which was designed to ensure that public officials or law enforcement officers who commit crimes in Michigan are held to account, is charged with leading the prosecution against Hawkins.

“Today upon learning that the Southfield City Clerk was formally charged with multiple crimes under Michigan election law, I exercised my authority under Michigan law to exert supervisory control over local election officials and directed the clerk to refrain from administering any election while there are charges pending against her,” Benson said. “Our elections are the foundation of our democracy, and under my and Attorney General Nessel’s administration there will be no tolerance for any actions that undermine that foundation – anywhere, anytime, by any person or official.”

Benson also stated that Hawkins actions did not affect the outcome of the election, noting that “there were no voters that were disenfranchised.”

Hawkins turned herself in and was arraigned Monday morning in front of Judge Michelle Friedman Appel, chief judge of the 45th District Court. She was released on $15,000 bond and a probable cause conference is currently scheduled for Sept. 30.