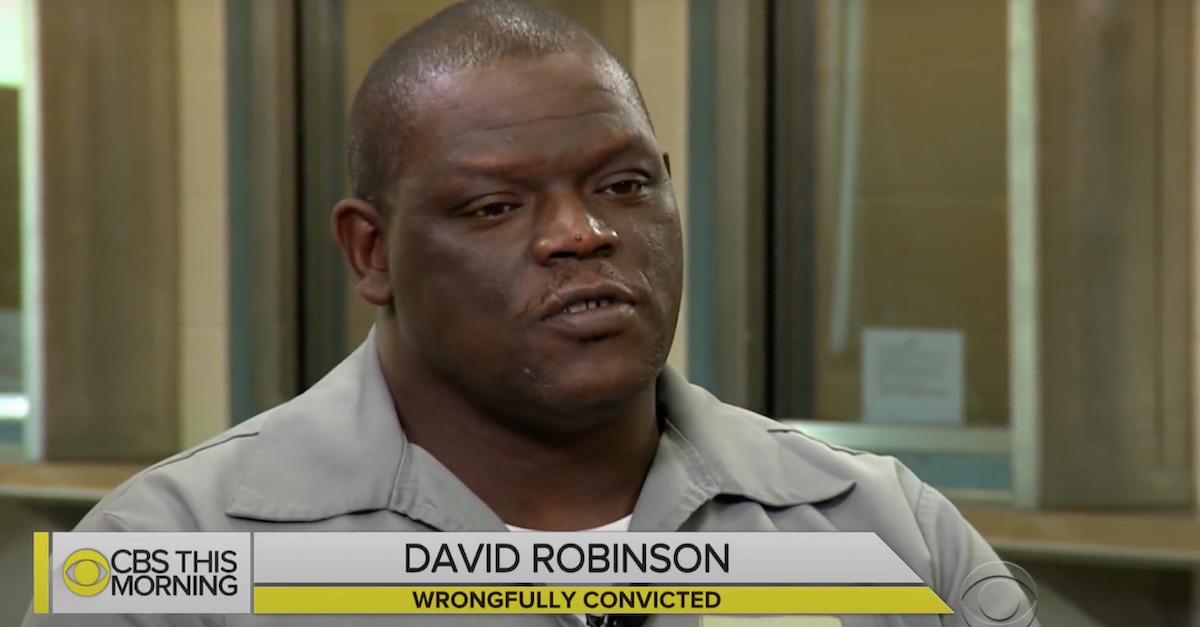 Missouri man David Robinson, who was wrongfully convicted of murder and subsequently released in May 2018 after serving nearly two decades in prison, now faces new and unrelated charges of first-degree domestic assault and tampering with a victim. If convicted, the charges against Robinson, 52, are punishable by up to life in prison.

The charges stem from an incident that allegedly occurred at a liquor store in Sikeston on Aug. 23. According to The Associated Press, Robinson “wrapped a towel around [a woman’s] throat, causing her to lose consciousness and strike her head on the counter.” Robinson had allegedly been arguing with the woman. It is further alleged that Robinson texted the woman in an attempt to persuade her to lie about the cause of her injuries.

Per The Southeast Missourian:

The assault was reported to police Thursday and surveillance footage of the alleged domestic assault was obtained, along with medical records of the victim’s treatment at the Missouri Delta Medical Center emergency room.

[Sikeston Department of Public Safety detective Benjamin] Quick stated the victim has since received a text message from Robinson telling her to blame her injuries on a car accident.

Robinson has pleaded not guilty to the charges, which are serious:

A person is guilty of assault in the first degree if he:

Robinson is being represented by Bryan Cave Leighton Paisner LLP, an international law firm whose largest U.S. office is based in Missouri. Robinson is reportedly being held without bond at the Cape Girardeau County Jail. His next court date is scheduled for Sept. 7.

The defendant was wrongfully convicted and sentenced to life without parole in 2001 for the murder of Sheila Box, a court ruled more than a decade and a half later:

Robinson was convicted of killing Box as she left a Sikeston bar, even though no physical evidence linked him to the crime and two witnesses who placed him at the scene recanted their testimony. Another man, Romanze Mosby, confessed to several people in 2004 that he killed Box, but he would not sign an affidavit making the confession official and then killed himself in his cell five years later. His confession was never introduced as evidence.

The state Supreme Court overturned Robinson’s conviction in May 2018 and he was released after a judge appointed to review the case for the court found there was clear and convincing evidence that Robinson had not committed the crime. Prosecutors decided not to retry him.

Robinson’s release from prison in May 2018 received widespread media coverage. So did the $8 million settlement Robinson won as recently as May 2020.