Grief-stricken Los Angeles Lakers General Manager Rob Pelinka testified Wednesday that he learned sheriff’s officials had shown off gruesome photos of Kobe Bryant’s body when he got a call from someone with the Lakers about a “terrible story, unthinkable story about to break in the LA Times.”

Deputies had shown “graphic, awful images” at bars and to friends, Pelinka said in a slow, tearful tone, and “I was horrified by the facts that were being relayed to me.”

“I just knew the impact it would have on Vanessa,” Pelinka testified. “The things she’s fought the most for is to protect the beauty of her family.”

Pelinka will return to the stand Thursday as the first witness in trial over lawsuits from Bryant and Christopher Chester, whose wife, Sarah George Chester, and daughter, Payton Chester, also died in the Jan. 26, 2020, helicopter crash that killed Kobe Bryant and 13-year-old daughter Gianna Bryant.

The basketball executive’s testimony Wednesday afternoon in U.S. District Judge John F. Walter’s Los Angeles courtroom followed opening statements that drew tears from Bryant and Chester as they sat next to each other at the plaintiff’s table.

“Kobe and Gianna were betrayed by the county,” Bryant’s lawyer Luis Li said, describing how the county “exploited the accident” and “poured salt in an unhealable wound.” He displayed for jurors a widely published photo of a grinning Kobe with his arm around a grinning Gianna.

Li described how deputies and fire officials “took pictures of broken bodies” and “closeups of limbs and burnt flesh,” then shared them at bars, a gala and online while playing the Call of Duty video game. He described how they deleted their own copies of photos but have left both Bryant and Chester with the daily terror that unaccounted for copies will someday surface somewhere. He also said the “culture of callousness” within law enforcement over the photos was endorsed by the lack of action within the sheriff’s department.

Li was followed by Chester’s lawyer Jerry Jackson, who detailed how the father of three learned he’d lost his wife — his college sweetheart — and the daughter who “inherited her dad’s basketball DNA.”

A former basketball player at Whittier College, Chester’s wrenching grief was intensified by the knowledge that law enforcement official she’d always trusted and respected had laughed and joked about his wife and daughter’s devastatingly catastrophic injuries.

Jackson described their wounds in graphic detail, apologizing for doing so but emphasizing that the specific wounds prove that the photos distributed by county officials were of the Chesters.

The county, he said, left him no choice.

“They’re making me do it,” Jackson told the jury.

Jackson said county officials have never once spoken to Chester about what happened, and told jurors to remember that when they hear in trial how sorry the county is.

LA County lawyer Mira Hashmall’s opening statement focused on the good work first responders did at the scene while also highlighting many photographs published of the scene by news outlets that, because the show the crash scene, “by definition show human remains.”

Hashmall, a partner with Miller Barondess LLP, also emphasized how many news organizations reported on the crash, showing a slide with dozens of media logos and telling jurors “every one of them was there”,

The openings followed Walter empaneling a jury of six men and four women — including a nun — for what will be nine to 10 days of testimony.

Li let some of his evidence do the talking in his opening through clips from recorded depositions and county investigations, as well as a video clip of Sheriff Alex Villanueva stating that there isn’t “a crime scene so there’s no evidence to take” and that any photographs “would be unauthorized and illicit.” He highlighted another instance where Villanueva described law enforcement “death books” with collections of photos of victims’ bodies as being “not unique to Los Angeles.”

“We just happened to have a lot more things that the media is interested in than in other parts of the country,” Villanueva said in the clip.

“Did you know about this?” Li asked jurors. “The sheriff did.” 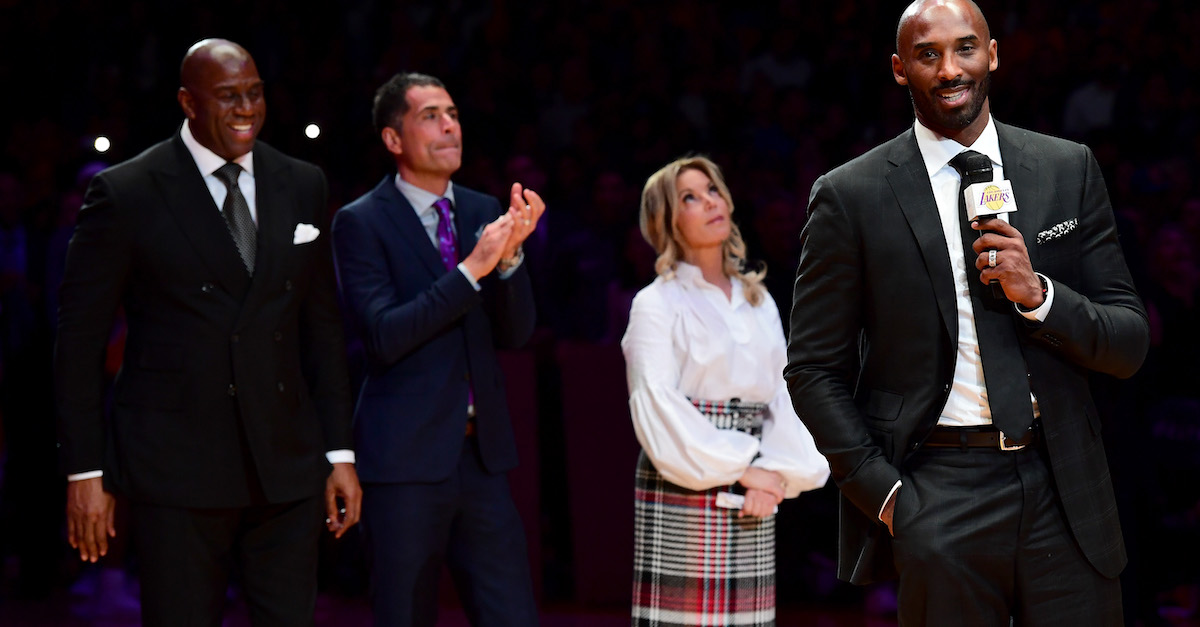 He played a clip of LA Times reporter Alene Tchekmedyian, who broke the news about the photos with reporter Paul Pringle, pressing Villanueva about a citizen complaint over the photos as he falsely denies one exists. He also played a clip of a deputy fire chief discussing in deposition Capt. Brian Jordan’s discipline over the photos, then played a deposition clip from Acting LA County Fire Chief Dennis Breshears, who was sitting at the defense table, in which Breshears said: “There’s no business need to take pictures of decedents.”

But it was a grief-stricken Pelinka who captivated an already rapt courtroom, slowly describing through choked tears how he met Kobe because he worked at a sports management firm that represented him and “he and I just hit it off.”

Pelinka has degrees in both law and business, two areas in which Kobe was interested, but “little did I realize that Vanessa was the one who wanted to learn.” Pelinka said they embarked on “an unbelievable journey” of life and love and faith “and Lakers basketball.”

When Li in an opening question asked Pelinka how he’d describe his relationship with Kobe, Pelinka paused for 30 seconds or so, struggling to maintain his composure. Li offered to get him a glass of water, and Pelinka choked out an “Um” before pushing again then finally saying, “He’s still my best friend.”

“And I feel so grateful because being friends with Kobe was like having a true superhero as your best friend,” Pelinka continued. Asked if he knew Gianna, Pelinka’s voice broke and he said, “Yes. I’m her Godfather.”

Asked how he would describe her, Pelinka answered “Magical.”

“She was special,” Pelinka testified. His children went to school with Gianna and “she was like an angel” who they loved.

“She smiled with her eyes and you knew when she walked into the room that everything would be OK,” Pelinka said.

Asked what Gianna’s relationship was like with her dad, Pelinka answered, “I’ve never experienced anything like it.” He said they were like the mirror image of each other.

“She clearly shared the Mamba mentality. Just the love for the sport and competition” but also her happiness and kindness, he said.

Pelinka said he and his wife, who’s a pediatrician in Newport Beach, California, feel closest to them when they’re with Kobe’s daughters “because they are the carriers of Kobe and Gianna’s legacy.”

Pelinka and his wife were attending a Sunday service at Mariners Church in Newport Beach when Kobe texted him from the helicopter about trying to help the sister of one of the passengers who was interested in sports marketing. (Pelinka didn’t identify her in testimony, but it was Lexi Altobelli, who lost her parents and sister in the crash.)

He got a call from someone with the Lakers when he got out of church saying, “Where are you? I’ve got horrible news.”

“My first instinct, I told my wife, we have to get to Vanessa,” Pelinka testified. They started driving from the church to the Bryant home but soon learned Vanessa was en route to the Orange County airport.

“I drove there and she was trying to get to her babies, and she wanted to get to them fast,” Pelinka said. When they couldn’t get cleared for a flight, Pelinka drove her to the Malibu-Lost Hills substation, where sheriff’s officials said they didn’t believe anyone had survived the crash. Asked how long the drive was, Pelinka answered “there’s a fog of grief, but I think it was about an hour and 50 minutes.”

“There were assurances passed onto us through the sheriff” that the scene would be secured “and privacy maintained.”

“You’d have to remind me his name,” Pelinka said of Sheriff Villanueva.

After Li did so, Pelinka said he was assured that the sheriff wants to honor Vanessa’s request. He also said sheriff’s officials didn’t tell him they were photographing the scene.

In the months that followed, Vanessa wanted to maintain a strong face for her daughters, but Pelinka is grateful that he can be there for her and “she can let her guard down and tell me what she feels.”

He went with Vanessa to the crash site in June 2020, accessing it by driving all-terrain vehicles. Vanessa, he said, “wanted to touch the soil where they were before they went to Heaven.” They prayed and grieved and “we just knew that they were with us,” Pelinka said.

He said Vanessa likes to surround her daughters with photos of Kobe and Gianna “because they’re these angels that guide everyone.” The juxtaposition of that with law enforcement showing off photos from the crash “was horrifying,” Pelinka testified.

Pelinka said the photos have extended Vanessa’s grief and is “a part of what she has to hold and walk with.” He said Vanessa was “protective of everything” regarding how her family is portrayed. “The photos and those acts add so much more grief,” he said.

“I know how intentional she is to create beauty around her kids,” Pelinka said, adding either in in her home “or on Instagram.” Li’s questions about that seemed to be a way of getting ahead of the defense’s plans to question Vanessa about cheerful pictures she’s posted to Instagram.

The trial is in session Monday through Friday from 8 a.m. to 2:30 p.m. with two 15-minute breaks and no electronics allowed in the courtroom.