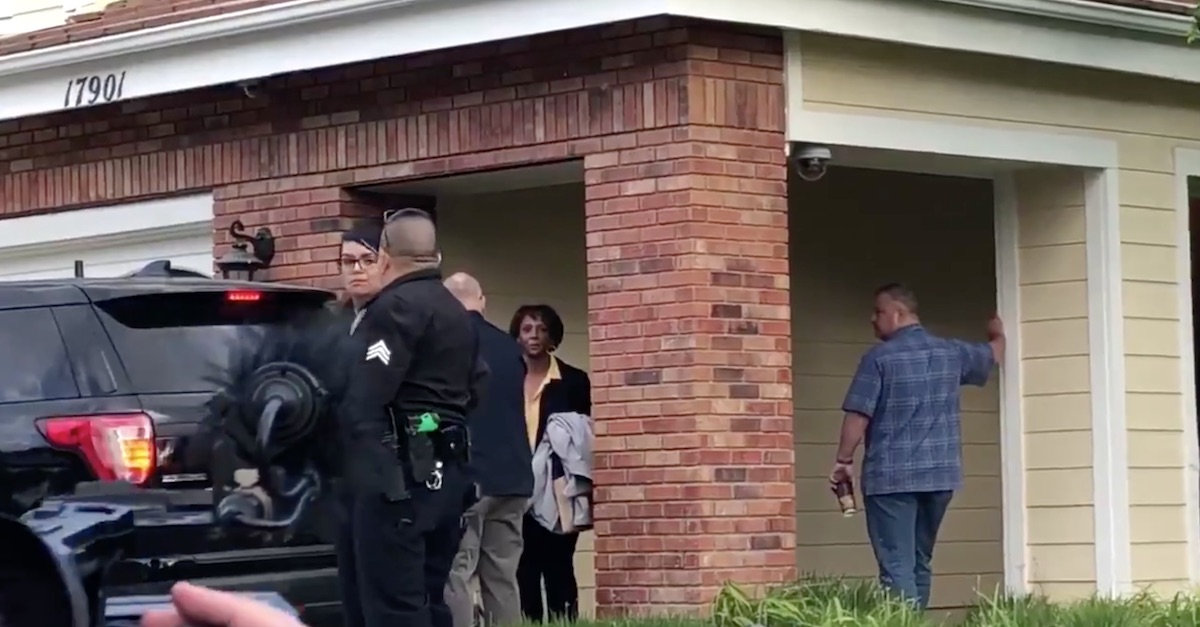 Los Angeles County District Attorney Jackie Lacey said at a Monday morning press conference that her husband David Lacey meant no harm to Black Lives Matter activists earlier in the day, when he pointed a gun at them and said “I’ll shoot you.”

“We expect that people will exercise their First Amendment right, but our home is our sanctuary,” the DA said. “This is not the first time this has happened. Maybe I was lulled into a sense of security.”

Lacey then said her husband “meant no one any harm.”

Lacey said that she spoke to David about what occurred. She said that his response in the early morning was one of “fear.” She said that he wanted her to say to the protesters that he is “profoundly sorry.”

“It was just him and I in that house and we really didn’t know what was about to happen,” Lacey said.

“I just want to live in peace and do my job,” said the elected official.

“He’s profoundly sorry,” says DA Jackie Lacey of her husband, who pulled a gun on a protester outside their home. “He meant no one any harm.” ⁦@KNX1070⁩ pic.twitter.com/aFnqh0AA3D

In case you missed it, Black Lives Matter activists upset that Lacey still hasn’t provided the community meeting she promised gathered outside of her home in protest before 6 a.m. on the west coast. David Lacey responded to the scene by opening the front door and brandishing a pistol. Video shows that he pointed the gun at the activists and threatened to shoot.

I’m front of DA Jackie Lacey’s house for that community meeting she promised with the @BLMLA crew. Rang her bell to invite her.

Her husband pulled a gun, cocked it, pointed it at my chest and said “I’ll shoot you. I don’t care who you are.” @WP4BL @RealJusticePAC @shaunking pic.twitter.com/WtazUWSJIC

Melina Abdullah, professor of Pan-African Studies at California State University, Los Angeles, shared video of the incident. She said that Lacey’s husband cocked a pistol, pointed the gun at her chest, and said “I’ll shoot you.”

“I’m front of DA Jackie Lacey’s house for that community meeting she promised with the @BLMLA crew. Rang her bell to invite her,” Abdullah tweeted earlier in the day. “Her husband pulled a gun, cocked it, pointed it at my chest and said “I’ll shoot you. I don’t care who you are.’”

The video shows David Lacey saying “Get off of my porch” repeatedly.

“I don’t care who you are, get off of my porch. Right now. We’re calling the police right now,” he said, and then slammed the door shut.

Jackie Lacey, as it turns out, is up for re-election, and the Democratic primary is on Tuesday.

Recent articles about Lacey’s re-election prospects have criticized her office’s handling of the Ed Buck case and criticized Lacey in particular for lack of community outreach:

While [challengers George] Gascon and [Rachel] Rossi have held a number of public events and shared debate stages in South L.A. and other areas in the run-up to Tuesday’s primary, Lacey has largely vanished from public view outside the occasional news conference at her office. After protesters disrupted portions of a late January debate, she refused to attend future candidate forums.

Dermot Givens, a Los Angeles-based political consultant and attorney, noted that Lacey’s lack of outreach could be problematic, especially with Gascon and Rossi blitzing neighborhoods that might once have solidly supported her. Some political consultants have compared Lacey’s campaign to that of former L.A. County Sheriff Jim McDonnell, who was upset by Alex Villanueva in 2018 after the incumbent failed to put away his opponents during the primary.

Law&Crime reached out to the Los Angeles County District Attorney’s Office for comment on Monday.

“As with any incident, LAPD will first investigate and if appropriate bring to an independent prosecutor’s office for review. The California Attorney General’s Office will assist LAPD in this matter,” Lacey’s office said in a statement.