Lin Wood’s Ex-Colleagues Sue Him for Defamation, Claim They Received Death Threats After Being Smeared as ‘Deep State’ Extortionists 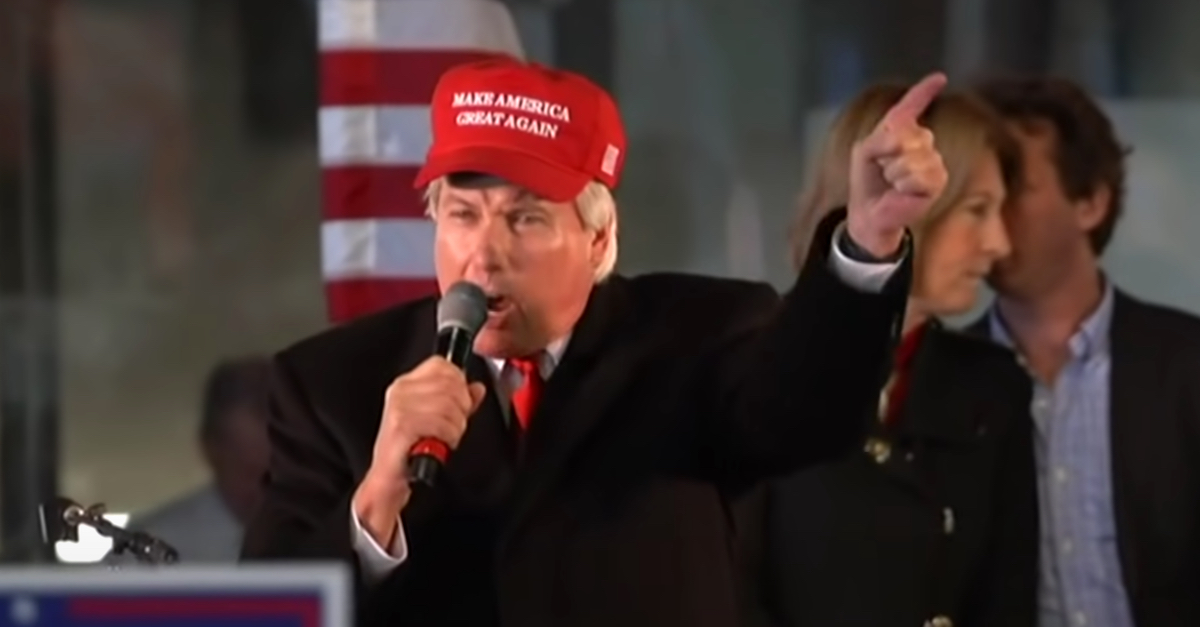 Three of pro-Trump lawyer Lin Wood’s former law partners sued him in federal court on Thursday, claiming that they received a physical threats after he smeared them as “deep state” extortionists on his more than 800,000-follower strong Telegram account.

Those ex-partners, Nicole Wade, Jonathan Grunberg, and Taylor Wilson, have been embroiled in litigation with Wood in state court for the better part of two years over a contract dispute. In the previous lawsuit, they claimed that his “abusive” and “erratic” behavior led them to negotiate their departure from his firm L. Lin Wood, P.C. in early 2020. (Wood now disputes that his former colleagues were ever his law partners, but he previously referred to them as partners in voice messages, archived versions of the firm’s website and court documents.)

“The lawsuit is textbook frivolous litigation,” Wood told Law&Crime in a statement. “My factually-based opinions are protected speech under the First Amendment of the United States Constitution.”

In the state action, the ex-partners asked a Georgia judge to enforce the terms of a settlement agreement signed in March 2020, which they claim Wood fraudulently induced them into signing and then refused to pay what he owed.

As that litigation played out in court, Wood attacked the trio on Telegram when they “tried to privately resolve their disputes,” characterizing those efforts as extortion and attempted extortion, according to a lawsuit they filed in the Northern District of Georgia on Thursday.

“In addition, Defendant Wood made many fantastical and obviously false and defamatory statements about Plaintiffs, including, for instance, that they are ‘deep state’ communists being paid by nefarious actors to bring litigation against him,” the 56-page complaint states.

Since battling him in court, the ex-partners claim that they faced a “torrent of threats” from Wood. The lawsuit quotes Wood telling them that they “have now subjected [themselves] and [their] families to the fact that you all are guilty of federal crimes.” Wood told them they “are going to be ruined financially, if necessary, in civil and criminal lawsuit[s],” and “are in fucking serious criminal and civil exposure,” according to the complaint.

The complaint embeds a text message with one of those threats of criminal action. 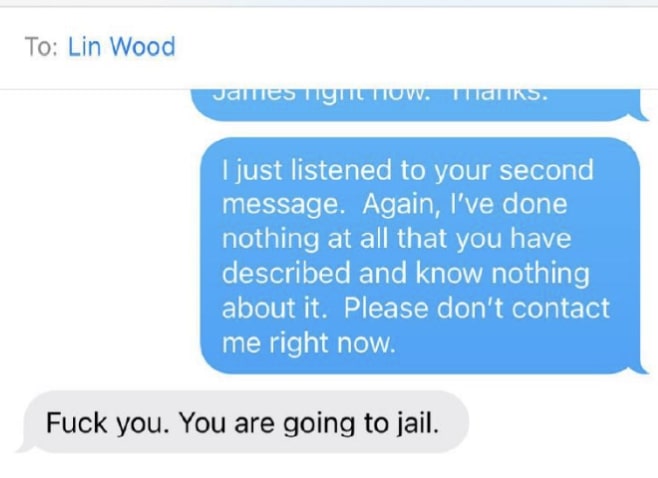 Lin Wood’s text to Taylor Wilson, according to the lawsuit.

When Wilson told him to cease contact, Wood allegedly replied: “Fuck you. You are going to jail.”

Claiming that he “will be setting up a meeting next week with the US Attorney for the Northern District of Georgia,” Wood allegedly breathed fire and brimstone into a message claiming “God Almighty told me [Wood] to get you back to where you belong[,] [b]roke and essentially homeless,” according to the lawsuit.

In December 2020, the ex-partners claimed to have recorded Wood claiming he “might actually be Christ coming back for a second time in the form of an imperfect man, elevating Christ consciousness.”

“That cause you to have a little bit of a chill? Who would be more eloquent to say what the will of God is, the belief of God in me,” Wood was quoted saying at the time.

On Jan. 26, 2021, Law&Crime exclusively published other recordings of Wood and his ex-colleagues in the debut episode of the podcast, “Objections: with Adam Klasfeld.”

Wood’s sermons are quoted at length in the new lawsuit, which states that he “will make sure you never practice law again ever if you do not admit your sins, all of them by 10:30 am.”

“Save your child,” Wood is quoted saying. “Save your wife. Save your life.”

Similar threats can be seen in the lawsuit, which embeds images of one user calling Wade a “whore” on Wood’s Telegram page and another user calling for “sloppy seconds” after someone writes “she’s mine.” 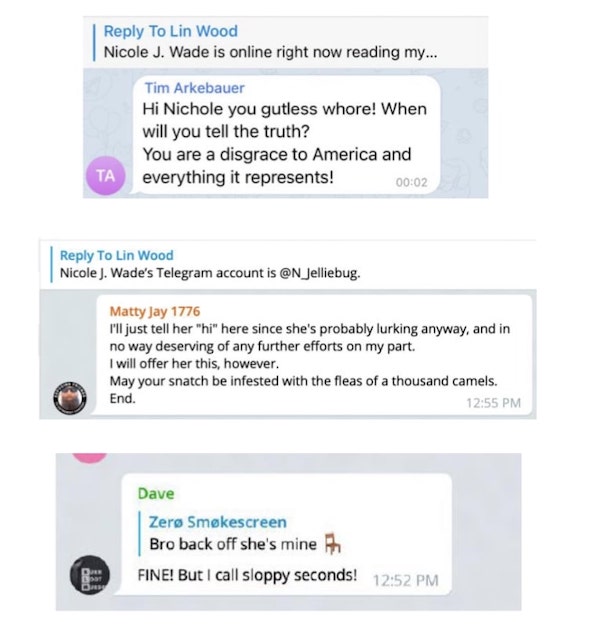 “In connection with posting the ‘transcripts’ of his own diatribes that he mischaracterized as ‘depositions,’ Defendant Wood also posted Plaintiff Wade’s picture and delighted in the threats he was inciting toward Plaintiffs, including by ‘doxxing’ Wade, which had the expected consequences,” the lawsuit states.

According to the lawsuit, Wood also posted pictures of Wilson and Grunberg, whom the lawsuit notes have “small children.”

In the state lawsuit, Wood’s ex-partners quoted him dropping him the F-bomb some 15 times and derisively calling Grunberg a “Chilean Jew.” One of Wood’s followers are quoted parroting that rhetoric in the federal complaint, in an antisemitic and homophobic message that ends: “Go out back and eat a bullet you spineless fuckhead.”

Another message from a user “War Damn Eagle” reads: “Line up the firing squad.” 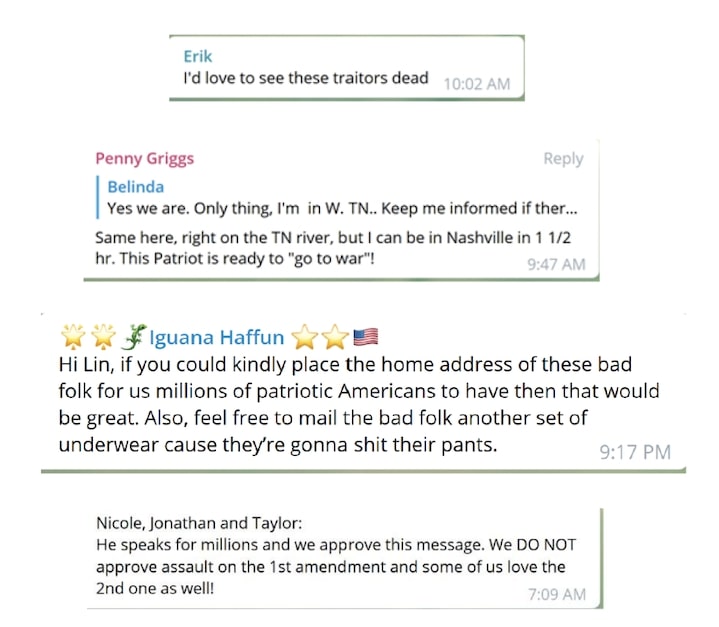 In another set of embedded messages, a user named “Erik” writes: “I’d love to see these traitors dead,” while another tells all three that “some of us love the 2nd” Amendment, referring to the right to bear arms.

The ex-partners demand more than $75,000 in compensation, plus punitive damages.

Update—March 17 at 4:09 p.m. Eastern Time: This story has been updated to include Wood’s comment.