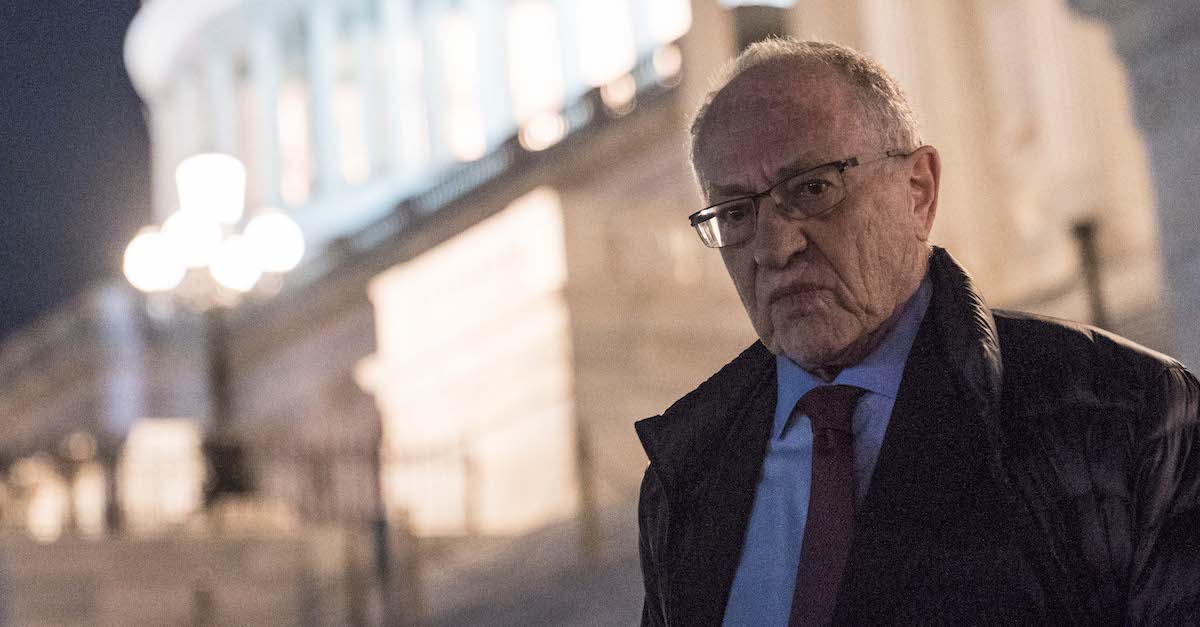 On Monday, Senior U.S. District Judge Loretta Preska ordered the unsealing of several documents related to the Jeffrey Epstein affair. Those documents are part of Dershowitz’s still-going case against Giuffre–which is a separate legal matter from the long-settled defamation case filed by Giuffre against alleged Epstein accomplice Ghislaine Maxwell.

The two controversies, while legally several dockets apart, are closely related in terms of at least some of the underlying facts.

Dershowitz has attempted to obtain the entirety of the massive tranche of secret Epstein files in the settled Giuffre-Maxwell lawsuit but has thus far proven unsuccessful–despite making several formal requests to access those controversial documents in full.

Another avenue Dershowitz has pursued in his defamation case against Giuffre is by attempting to subpoena Les Wexner and Wexner family attorney John Zeiger for documents and to sit for depositions.

Wexner has long been adjacent to Epstein’s alleged global elite sex-trafficking empire–due to Epstein’s years-long work as Wexner’s financial advisor. Artist Maria Farmer also told law enforcement that she was sexually assaulted by Epstein and Maxwell while serving as Wexner’s artist-in-residence in 1996. Nearly two years after Epstein was charged in Florida, Wexner officially cut ties with his onetime financial guru. Over a decade later, Wexner alleged that Epstein had “misappropriated vast sums of money” from him and his estate.

Dershowitz seems to believe that Wexner can shed some favorable light on his extortion claims against Giuffre. But a series of letters authored by Wexner’s attorney Marion H. Little seem to foreclose against such a role.

One letter addressed to Preska begins [emphasis ours]:

We are writing in response to Defendant Dershowitz’s correspondence of July 23, 2020. The discovery disputes generally fall into two categories. The first is the manner by which confidential documents and testimony should be produced. We submit discovery should be conducted subject to a protective order. The second relates to the scope of discovery, and specifically whether Defendant, adopting the maxim “falsus in uno, falsus in omnibus,” should be permitted to impose an unnecessary burden upon Mr. Wexner and many others for purposes of staging a collateral attack on the credibility of Ms. Giuffre with extrinsic evidence. We submit there is no basis for compelling Mr. Wexner’s deposition.

The Latin employed above translate to “false in one thing, false in everything” and is another way of Wexner saying that Dershowitz’s demands for testimony are premised on falsehoods. Specifically, Little is arguing that Dershowitz has brought in immaterial and incorrect theories about another defamation lawsuit filed against Dershowitz by famous attorney David Boies (Preska disqualified Boies and his law firm from representing Giuffre in Oct. 2019).

Again the letter, at length:

[Dershowitz’s] Counterclaim includes the contention that Ms. Giuffre defamed him as part of a scheme orchestrated by Mr. Boies to extort monies from wealthy men. While many of these are discovery subjects that should be, in the first instance, explored with Ms. Giuffre and Mr. Boies, Mr. Zeiger did have communications with Mr. Boies and can readily confirm that: no extortion demand was ever made, no settlement was entered into, and not a penny (or other consideration) was ever paid. Just the opposite is true for Mr. Wexner, however. He had no involvement, and thus lacks any personal knowledge relating to, Defendant’s so-called “Extortion Claim.” Mr. Boies, who is in the midst of litigation with [Dershowitz], can readily confirm Mr. Wexner’s lack of involvement without burdening a non-party.

In other words, Wexner is saying that neither he nor his family attorney have any idea what Dershowitz is talking about.

Another letter, from Little to Dershowitz’s attorney Howard Cooper, is especially dismissive of Dershowitz’s requests.

“At the outset, we note that your email appears to be an effort to rewrite both the context and content of our discussions,” the letter says. “We assumed that your client is driving this new position, but we are obviously obligated to respond directly through you.”

Little goes on to accuse Cooper and Dershowitz of “incorrectly” stating the “amount of documents” responsive to the subpoena and to note that none of those documents will be released without a protective order.

Little also accuses Dershowitz of “game playing” and breaching the terms of a prior agreement and threatens to go after the Harvard Law professor emeritus for attorneys’ fees.

“There is another point your client should appreciate,” the letter concludes. “[Federal] Rule 45 expressly provides for a non-party’s recovery of its attorneys’ fees where undue burden or expense has been imposed.”

Read both letters, in full, below:

Wexner Letter to Judge Preska by Law&Crime on Scribd

Wexner Letter to Dershowitz by Law&Crime on Scribd