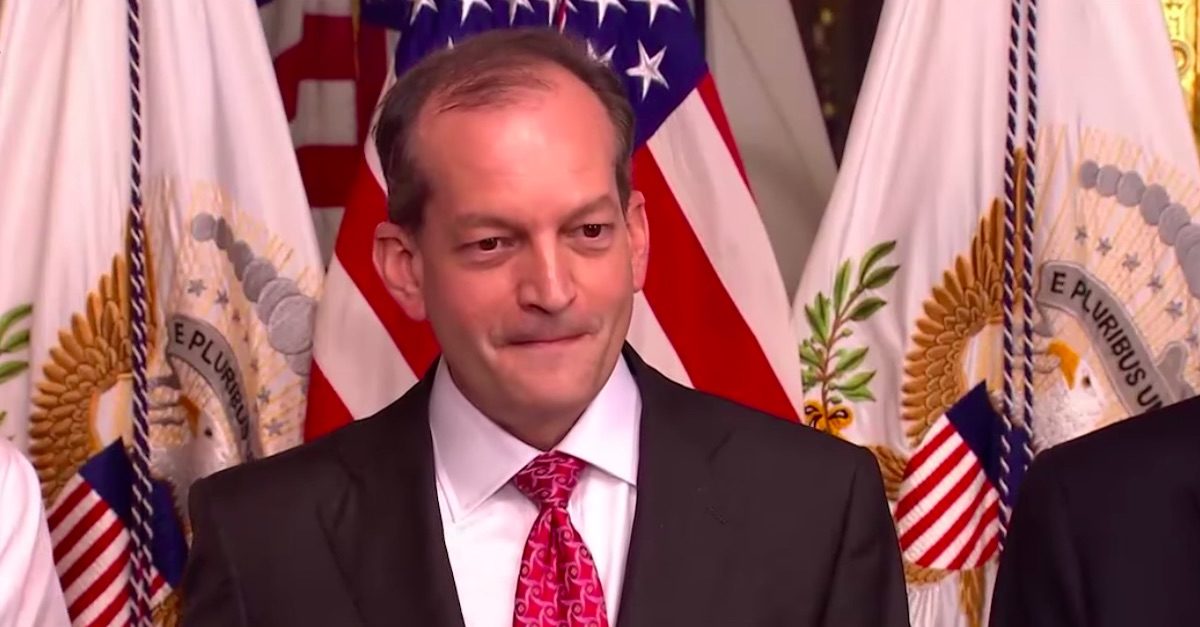 Alexander Acosta, the former U.S. attorney for the Southern District of Florida who oversaw the sweetheart plea deal granted to accused child sex-trafficker Jeffery Epstein, said Tuesday that he was “pleased” authorities in New York decided to prosecute Epstein “based on new evidence.”

Following Epstein’s arrest over the weekend, Acosta’s role in securing him the extremely lenient non-prosecution agreement has come under increasingly intense scrutiny. Many legal experts say the terms of the deal were indefensible and unprecedented in light of the alleged crimes. Epstein was sent to county jail for 13 months, had daily 12-hour work-release privileges and secured immunity from federal prosecution for himself and his alleged co-conspirators.

Epstein appeared before a magistrate judge on Monday and pleaded not guilty to charges that he sexually abused a vast “network” of underage girls, paid them, then paid them to recruit new victims between 2002 and 2005; he currently faces up to 45 years in prison if convicted.

“The crimes committed by Epstein are horrific, and I am pleased that NY prosecutors are moving forward with a case based on new evidence,” Acosta, tweeted Tuesday. “With the evidence available more than a decade ago, federal prosecutors insisted that Epstein go to jail, register as a sex offender and put the world on notice that he was a sexual predator. Now that new evidence and additional testimony is available, the NY prosecution offers an important opportunity to more fully bring him to justice.”

But in praising the new prosecution efforts, critics have noted that at the time Acosta granted Epstein’s previous non-prosecution agreement, his office possessed a great deal of the same evidence currently being used by the Southern District of New York.

Julie K. Brown, the Miami Herald reporter who whose series Perversion of Justice detailed Epstein’s case and brought the controversy back into the spotlight, responded to Acosta’s comments.

“Except the record shows you had the evidence in 2007. Remember the 53-page indictment, the phone records, the trash pulls, the flight manifests, the witnesses who worked for Epstein?” Brown tweeted Tuesday.

“Acosta shut the victims out of the process. Period. A federal judge confirmed this in February,” Brown added, referring to a recent ruling that the plea deal violated the Crime Victims’ Rights Act (CVRA).

“Noteworthy from the SDNY bail memo on Epstein: Florida prosecutors not only knew Epstein was a sexual predator but also that he harassed & intimidated the victims & their families to stop them from testifying. No federal prosecutor should let conduct like that go. Acosta did,” Rocah tweeted.

Rocah’s tweet caught the attention of attorney George Conway, who also weighed in on Acosta’s decision to allow Epstein to plea to such lenient terms.

“The 2008 non-prosecution agreement was incomprehensible and inexplicable enough already.  This fact just makes it virtually impossible to believe that it was merely the product of exceedingly awful judgment,” Conway tweeted.

Ken White, an attorney and former federal prosecutor you may recognize from the Popehat blog, penned a column in the Atlantic on Tuesday in which he questioned Acosta’s past explanations:

Why did the Department of Justice cut such a deal? Acosta claimed that the U.S. Attorney’s Office worried it would have trouble proving federal charges against Epstein. With all respect to Acosta—who, in full disclosure, was a law-school classmate—that explanation is not credible. Federal prosecutors are famously reluctant to bring hard-to-prove cases, unlike district attorneys, who are generally eager to roll the dice. But no federal prosecutor would hesitate to pursue allegations of pervasive, organized child-sex abuse, backed by firsthand witnesses. It is more plausible that Epstein successfully wielded his nearly incomprehensible money and power to influence the decision at the highest levels.

Others were even more direct in their criticism of Acosta:

Why haven’t you been fired?

You BROKE the law in not informing victims.

Also on Tuesday, White House counselor Kellyanne Conway (who is married to the aforementioned George Conway), told reporters that Acosta is “doing a great job,” before accusing Democrats of drawing attention away from “the perpetrator at hand” by focusing the media’s attention on attacking the Trump Administration.

President Donald Trump, for his part, said Acosta has done an “excellent” job during his time working in the Trump Administration.

NEW: Pres. Trump defends Alex Acosta as an "excellent" Labor secretary amid scrutiny over his role in Jeffrey Epstein plea deal, saying "a lot of people" were involved in the deal.