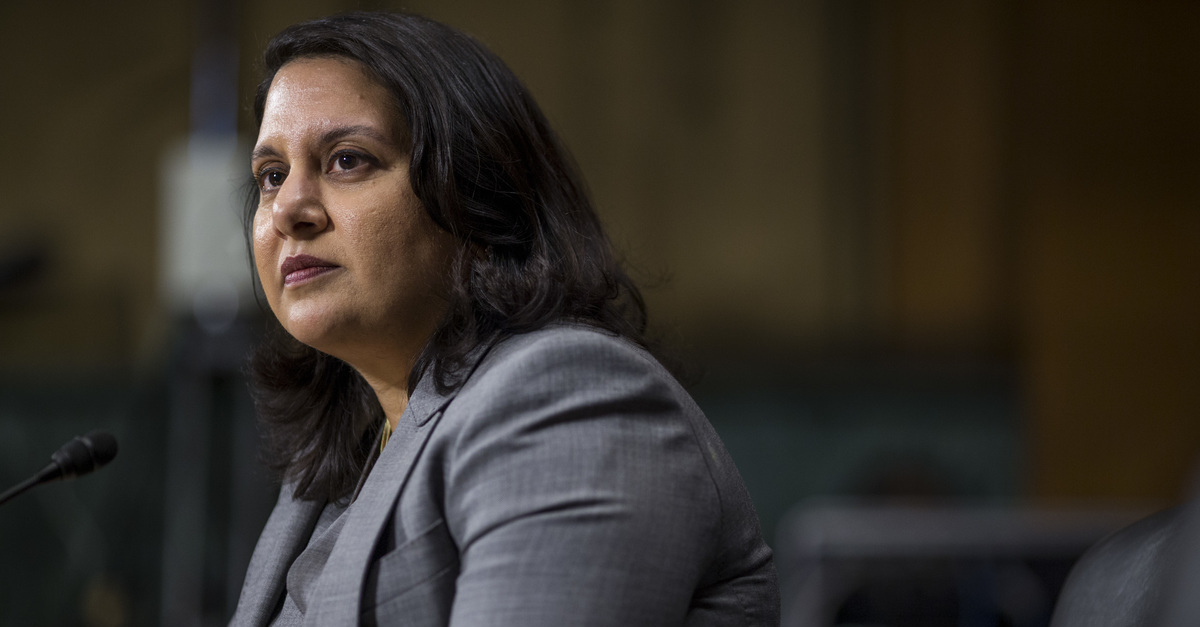 Sen. Sheldon Whitehouse (D-Rhode Island) was upbraided by attorneys left and right on Friday after characterizing a member of the federal judiciary as “a cartoon of a fake judge.”

The Democratic senator’s comments were directed at U.S. Court of Appeals for the District of Columbia Judge Neomi Rao—a “controversial” jurist whose career on the bench began in March 2019 as President Donald Trump‘s handpicked successor to recently promoted Supreme Court Justice Brett Kavanaugh.

“Where you see Neomi Rao, you can expect a lot of Trumpy dirt to follow,” Whitehouse tweeted on Thursday evening. “She’s a cartoon of a fake judge. Watch this space.”

The space did catch some eyes and was quickly rubbished.

“Bad legal take by [Whitehouse],” he tweeted. “Grossly unfair [and] hypocritical to smear Judge Rao. If Whitehouse is mad about Judge Rao’s dissent in the House subpoena case, he should save his outrage for his House colleagues who ignored Rao’s fair warnings [and] then bombed at SCOTUS.”

Appellate and Supreme Court attorney Sean Marotta took things a bit further: “Respected former law professor. Former head of [the Office of Information and Regulatory Affairs]. Former #SCOTUS clerk. I guess attacking accomplished female judges who are the daughters of immigrants is okay when you think they won’t rule how you want them to.”

Whitehouse, who is an attorney himself, was also outright accused of acting unethically by impugning Rao’s juridical motives.

Rule 8.2(a) of the Rhode Island Rules of Professional Conduct provides that “[a] lawyer shall not make a statement that the lawyer knows to be false or with reckless disregard as to its truth or falsity concerning the qualifications or integrity of a judge[.]”

Attached to his tweet was a link to a Politico article about the three-judge panel drawn by retired lieutenant general Michael Flynn in his tumultuous bid to have charges of lying to federal investigators dismissed by U.S. District Judge Emmet Sullivan. Circuit Judges Karen LeCraft Henderson, Robert L. Wilkins and Rao are the judges on that panel.

Attorney General Bill Barr previously instructed his subordinates to dismiss the government’s case against Flynn, but the Federal Rules of Criminal Procedure say that the DOJ may dismiss a case with “leave of the court.” Judge Sullivan, who once erroneously asked out loud if authorities considered charging Flynn for treason, chose a path other than immediate dismissal.

While actions in Sullivan’s court are still pending, Flynn’s attorneys sought to leapfrog the Judge Sullivan–who they have plausibly accused of harboring untoward bias against their client–by filing a writ of mandamus with the D.C. Court of Appeals.

The writ is a bid for extraordinary relief that asks the higher court to effectively force Sullivan to dismiss the case on their order. The filing is decidedly a risky move that could actually give the lower court judge plenary authority over Flynn’s fate–and the Tuesday filing was initially ridiculed by liberal legal experts as dead-on-arrival.

“Does not meet steep mandamus standard [and] will be tossed,” Obama admin alum Norm Eisen tweeted at the time.

Contrary to that analysis and others, however, the appeals court is actually taking the request seriously–at least for now–and has asked for Sullivan to explain himself within 10 days of the court’s order filed Thursday and respond to Flynn’s concerns as to why the judge has not granted the government’s May 7 motion to dismiss.