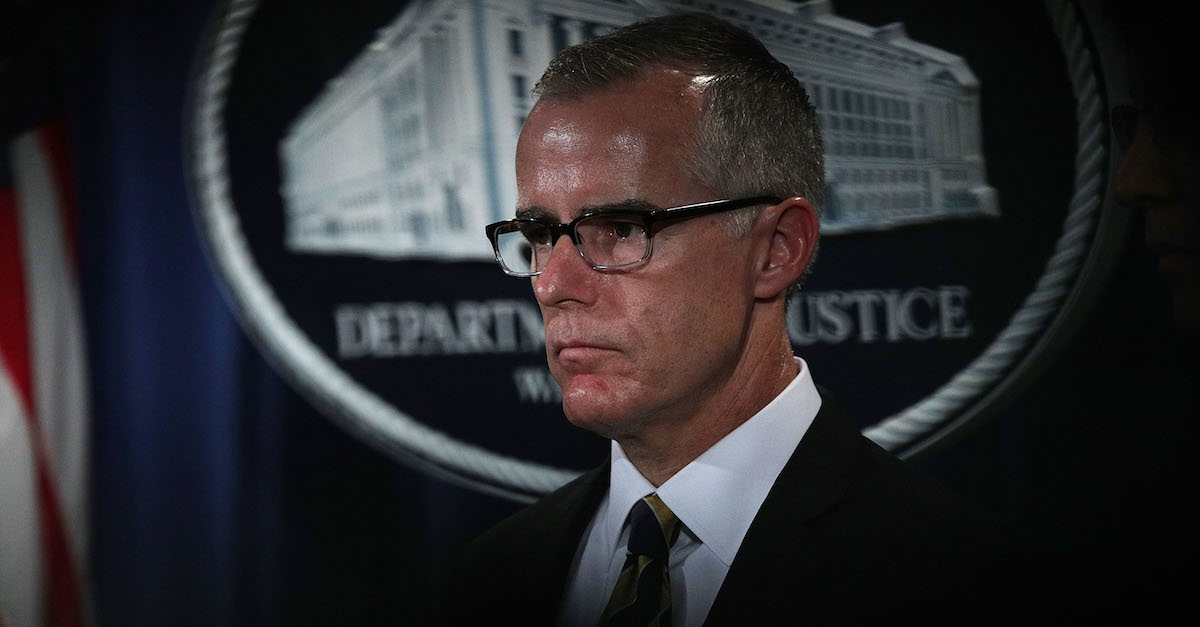 Lawyers for former FBI Deputy Director Andrew McCabe had some things to say about leaks on Thursday. McCabe attorneys Michael R. Bromwich and David Schertler, in a lengthy statement, accused either the Department of Justice or the U.S. Attorney’s Office in Washington, D.C. of violating grand jury secrecy rules.

The lawyers’ statement, which called for a grand jury investigation of leaks, focused on recent reporting that said all signs indicated McCabe was going to be indicted for lying to federal agents about his role in leaks to the media regarding the FBI’s investigation into the Clinton Foundation.

“On September 11, we were advised by more than a dozen reporters that the grand jury was being convened and that we should expect an indictment of Mr. McCabe that afternoon,” the statement began. “Later in the day, we were told by reporters that the grand jury would be reconvening Thursday morning and that Mr. McCabe would be indicted at that time. The reporters could only have obtained this information from personnel at the the Department of Justice or the U.S. Attorney’s Office and such leaks are prohibited by rules governing grand jury secrecy.”

On the very next day, they said, reporters told them that the grand jury had decided not to indict McCabe — but then learned the Deputy Attorney General (DAG) had denied their “DAG appeal” to make the case go away.

“We have no idea whether this was accurate information and no one has either confirmed or denied it to us. On September 12, at 12:21 p.m., we received a note from the Deputy Attorney General’s Office,” the statement continued. “The two sentence message indicated that the Deputy Attorney General denied our appeal of the U.S. Attorney’s decision to move forward with an indictment of Mr. McCabe. The content of that email was leaked to the media within 30 minutes of it being sent to us, in violation of DOJ policy.”

Fully aware of what their client is accused of, Bromwich and Scherlter called “These leaks in violation of DOJ policy […] particularly ironic given that the entire predicate for any false statements charges that might be brought against our client is an authorized disclosure of information that he directed be made in October 2016.”

As a result, they said: they have demanded an investigation into the alleged leaks; demanded that if it was true that the grand jury recommended no indictment that the government immediately drop the case; demanded an update on the status of the investigation.

In closing, they claimed that the investigation into McCabe has been marred by fatal flaws “from its inception” and “irrevocably tainted” by President Donald Trump’s “targeting” of McCabe for prosecution. They called the investigation “deeply unfair,” a “waste of governmental resources” and a battle not worthy of Department of Justice “traditions.”

The New York Times recently reported that a decision about McCabe was in the “final stages” and was expected to involve U.S. Attorney General William Barr’s Deputy Attorney General (DAG) Jeffrey Rosen. The Times, in particular, mentioned that “[i]n two meetings” McCabe’s lawyers met Rosen and “for more than an hour with the United States attorney for the District of Columbia, Jessie K. Liu.” It was said that McCabe’s lawyers were trying to “persuade them not to indict their client.”

As recently as today, McCabe appeared on CNN as a contributor to praise a certain whistleblower for coming forward.

“That takes incredible courage. It is hard to stand up to an administration — particularly to this administration and this president — and to live up to those responsibilities in a way that you known can engender all sorts of criticism and controversy around your personal life,” he said. “This is something that, of course, I know all too well.”