U.S. District Judge Amy Berman Jackson, in a minute order, asked for clarification as to the exact scope of the controversial commutation handed out by the 45th president last Friday night.

“[T]he parties are ORDERED to provide the [D.C. District] Court by July 14, 2020 with a copy of the Executive Order commuting the defendant’s sentence and to address the question of the scope of the commutation, in particular, whether it involves the sentence of incarceration alone or also the period of supervised release,” Jackson wrote in the brief directive.

“I was wondering about this this morning,” University of Alabama Law Professor and former federal prosecutor Joyce White Vance wrote in response to the order. “Theoretically, even with commutation, if Stone violates the terms of his supervised release, the judge could be able to consider revoking it [and] return him to custody. An interesting possible implication of this being commutation, not pardon.” 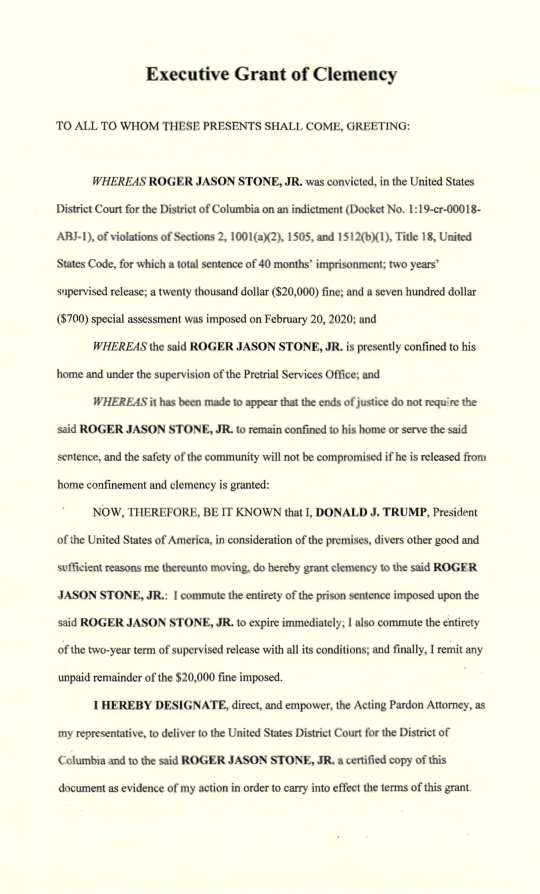 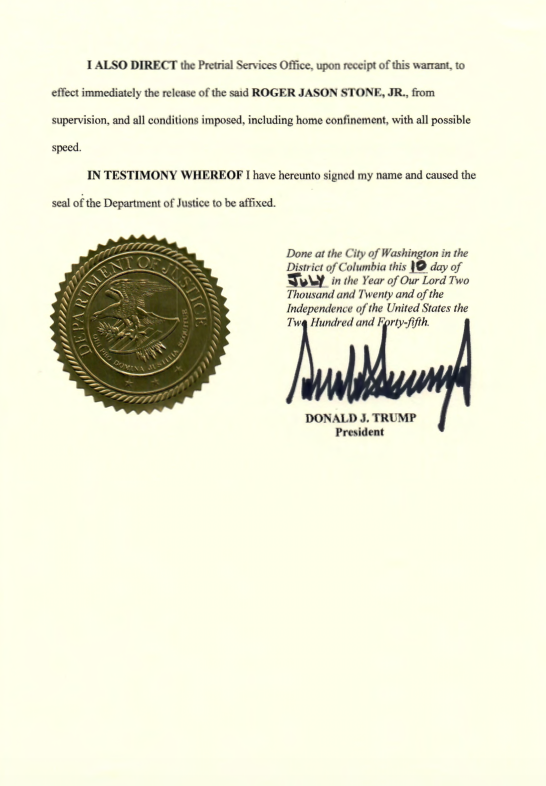 Trump ignited a whirlwind of media criticism after commuting Stone’s 40-month prison sentence with a blistering and vituperative statement that was more syntactically akin to a recent vintage tweetstorm than a commutation decree. The White House said Stone was pursued as part of an “absolutely baseless investigation,” that Stone was “a victim of the Russia Hoax that the Left and its allies in the media” perpetuated, and ragged on a juror in the case who the White House called “a member of the so-called liberal ‘resistance’ to the Trump Presidency.” It also complained of the so-called “process-based charges” (rather than substantive charges) leveled at Stone:

Mr. Stone was charged by the same prosecutors from the Mueller Investigation tasked with finding evidence of collusion with Russia. Because no such evidence exists, however, they could not charge him for any collusion-related crime. Instead, they charged him for his conduct during their investigation.

The statement contained no clear particulars for Judge Jackson to follow.

By issuing Monday’s order, the court was essentially asking the U.S. Department of Justice whether or not a 24-month probation term still applies to Stone’s sentence in lieu of the commuted prison term. The Trump clemency order gave the answer.

Trump’s statement, which largely cast Stone as collateral damage in a partisan war against the White House itself, seemingly left such details unclear to the relevant authorities charged with Stone’s release and potentially continued criminal justice system supervision.

Jackson noted that her order was issued “[i]n response to questions raised by the U.S. Probation Office.”

Stone was convicted on seven felony counts of lying to Congress, witness tampering, and obstruction of justice in late 2019. Since then, his defense team and his support network have lodged several efforts for an appeal and clemency–including a direct plea to Trump.

“Save my life!” Stone asked his friend the president by way of the media just three days before the commutation was issued–arguing that the mismanaged federal prison system’s decidedly poor response to the pandemic was tantamount to a death sentence if the 67-year-old were to actually be incarcerated alongside other inmates in a typically decrepit federal lockup.

The president, of course, responded, but apparently not with enough clarity for the judge who has long overseen Stone’s case.

Legal writer Cristian Farias offered a tongue in cheek appraisal of the maybe penultimate drama in the Roger Stone saga:

This is something I might have done back when I was a probation officer:

“Excuse me, your honor, your judgment of conviction says he’s gotta report. I don’t see anything in his file that that has changed.”

UPDATE: The Office of Pardon Attorney released the Stone clemency order late Monday afternoon. The order notes that Stone’s sentence has been voided in its entirety–inclusive of the prison term, concomitant post-lockup supervised released and a $20,000 fine.

The full document is available here.