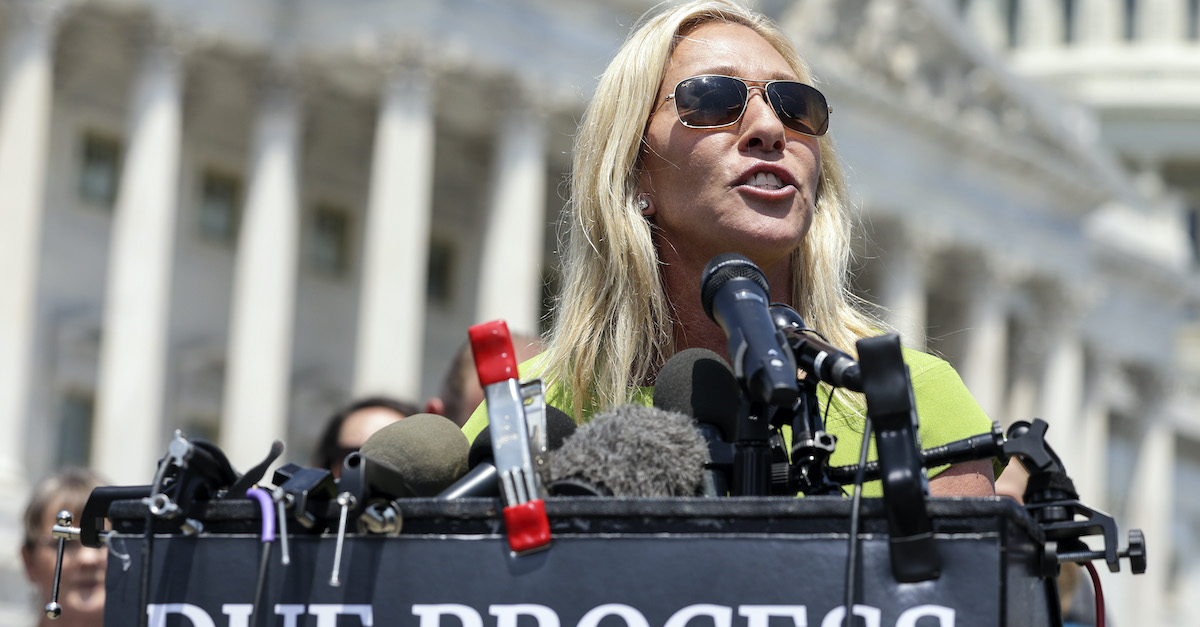 Rep. Marjorie Taylor Greene (R-Ga.) once again defeated a legal action aiming to knock her off the ballot for re-election, as a Georgia judge affirmed the ruling of another court.

Recapping an administrative court judge’s findings “there is no evidence to show that Rep. Greene participated in the invasion itself,” Fulton County Superior Court Judge Christopher Brasher wrote in his ruling on Monday that he “does not find that the Administrative Law Judge applied the wrong legal standard.”

The advocacy group Free Speech for People alleges that Greene violated the 14th Amendment’s third clause, barring anyone who has “previously taken an oath as a member of Congress” from having “engaged in insurrection or rebellion against the same, or [given] aid or comfort to the enemies thereof.”

In May, Administrative Law Judge Charles R. Beaudrot in Georgia rejected the group’s legal arguments, finding that the evidence “lacking” Greene was an “insurrectionist.”

In appellate papers, attorneys challenging Greene’s candidacy criticized Beaudrot for denying them discovery that would have helped them further explore their case. The challengers specifically Greene’s communications with Jan. 6 organizer and pro-Trump activist Ali Alexander and Anthony Aguero, a live-streamer described by CNN as Greene’s close ally. Aguero reportedly entered the building during the riot, posting messages supportive of the pro-Trump mob.

The challengers’ attorney Bryan L. Sells claimed that Beaudrot should have allowed them to explore those connections.

“Representative Greene made no showing that the number of documents requested by the petitioners was voluminous,” Sells wrote. “Did she have so many emails with Ali Alexander that producing them in the month available to her would have been difficult? She didn’t say. And even if the judge thought that some of the document requests were out of bounds, he could have severed or narrowed the specific requests he considered inappropriate rather than quash the notice altogether.”

But Brasher ultimately found that the advocacy group was not entitled to discovery.

“As an initial matter, the Court notes that the Office of State Administrative Hearings is not subject to the Georgia Civil Practice Act and its extensive provisions pertaining to discovery,” the judge wrote, adding that “pre-hearing discovery is improper.”

Both the Jan. 6 Committee and the Department of Justice has sought Alexander’s testimony. Alexander claims that he was assured that he is not a target, only a fact witness. Alexander, Aguero and Greene have not been charged with crimes in connection with the attack on the U.S. Capitol.

There is some evidence, though murky, that Greene may have lobbied the Trump administration to avoid being charged.

The House committee investigating the Jan. 6 attack on the U.S. Capitol ran hearings suggesting that Greene sought a pardon from Trump. Greene denies the claim, based on a secondhand report by Cassidy Hutchinson, formerly a top aide for Trump’s then-chief of staff Mark Meadows.

“I heard that she had asked White House counsel’s office for a pardon,” Hutchinson said of Greene in a video deposition.

Free Speech for People brought similar challenges against Rep. Madison Cawthorn (R-N.C.), Rep. Paul Gosar (R-Ariz.) and other politicians on the political right. It also urged Secretaries of State to bar Trump from appearing on the ballot on the same grounds.