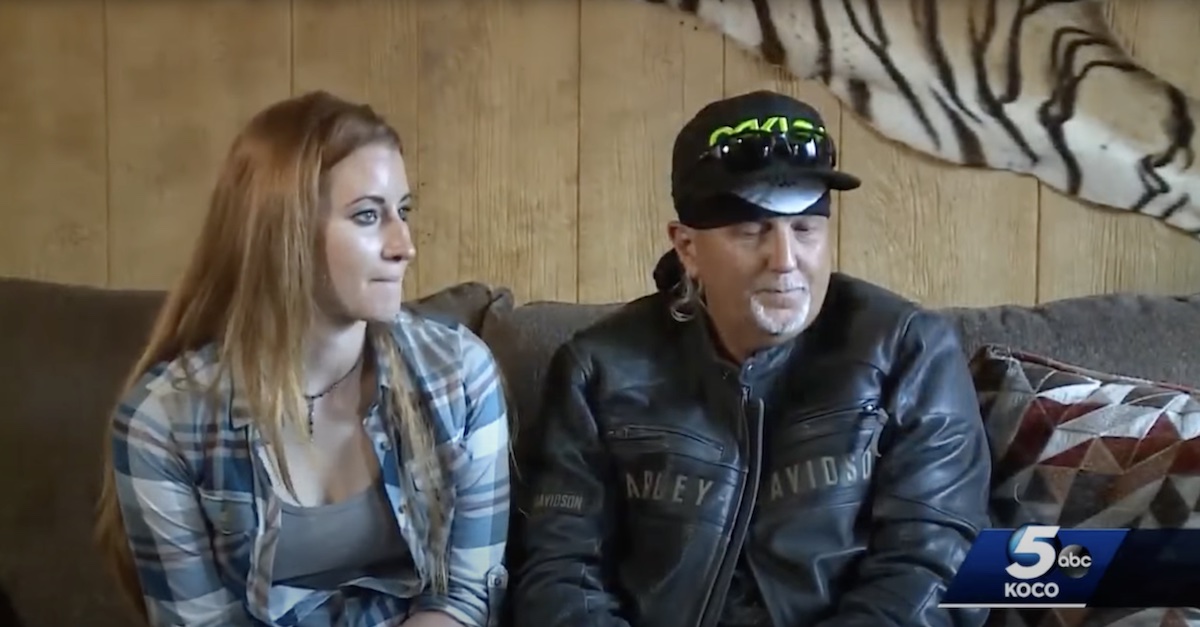 The U.S. government announced on Thursday that it is now in possession of “68 protected lions, tigers, lion-tiger hybrids, and a jaguar” that were seized from Jeffrey “Jeff” Lowe and Lauren Lowe, a married couple and zookeepers who were profiled in the Netflix docuseries Tiger King. The seizure of the creatures at Tiger King Park in Thackerville, Oklahoma was “pursuant to a judicially-authorized search and seizure warrant, for ongoing Endangered Species Act (ESA) violations,” the government said.

The Department of Justice said that a stipulation in the federal case against the Lowes authorized the government to inspect Tiger King Park three times since Dec. 2020. To hear the government tell it, those inspections did not turn up good results for the Lowes.

“During these inspections, the Lowes received citations for failing to provide the animals with adequate or timely veterinary care, appropriate nutrition, and shelter that protects them from inclement weather and is of sufficient size to allow them to engage in normal behavior,” the press release said, noting that the Lowes were found in civil contempt of court as recently as May 14.

U.S. District Judge John F. Heil III found that there was “clear and convincing evidence” that the Lowes “are in civil contempt” for violating the court’s orders. Judge Heil started fining the Lowes $1,000 a day until they were in “full compliance” with the court’s orders:

Having found Defendants in civil contempt, and having considered the undisputed information provided regarding Defendants’ financial resources, the Court HEREBY ORDERS that:
(1) Defendants shall be fined $1,000 per day, beginning May 12, 2021, until they are in full compliance with the requirements set forth in the Court’s January 15, 2021 and March 22, 2021 Orders. Dkt. No. 65; Dkt. No. 78;
(2) By May 28, 2021, the United States may submit an accounting of any actual damages it has incurred as a result of Defendants’ noncompliance for the Court’s consideration;
(3) The Court will consider further sanctions if Defendants are not fully compliant with its January 15, 2021 and March 22, 2021 Orders by June 11, 2021.

The government had alleged as follows, as the judge recounted it:

The judge also didn’t seem concerned that a $1,000-per-day fine was too punitive for the Lowes. He cited their own statements about their finances — including that Lauren Lowe is making $10,000 per week on OnlyFans:

In January, the government slammed the Lowes for showing “shocking disregard for both the health and welfare of their animals, as well as the law.”

“We are gratified the court agrees and ordered Mr. Lowe to stop ignoring his obligations under the Animal Welfare Act and the Endangered Species Act,” Acting Assistant Attorney General Jonathan D. Brightbill of the Justice Department’s Environment and Natural Resources Division said at the time.

Jeff Lowe appeared in Tiger King as a business partner-turned-adversary of Joseph Maldonado–Passage (a.k.a. Joe Exotic, and the “Tiger King” after whom the show is named). Maldonado-Passage is currently serving a 22-year prison sentence after a jury convicted him on allegations of animal abuse and hiring a hitman in an attempt to kill his Big Cat rival Carole Baskin. Joe Exotic sought a pardon from former President Donald Trump, but the clemency never came. Now he claims that he’s showing signs of cancer and is pleading with President Joe Biden for a pardon.

…are out of control, I throw up more than I eat. I don't want anyone's pity, what I need is when John Phillips gets the evidence he is working on, I need the world to help him get President Biden, VP Harris and the Attorney General to listen to the evidence and see that…

…from all over the world. I love you all. Wish me luck…#JusticeForJoeExotic #TigerKing #JoeExotic @JohnPhillips

Lowe had taken over Maldonado-Passage’s Oklahoma-based zoo, but that facility–the Greater Wynnewood Exotic Animal Park–closed in August 2020. The federal government said that even though Lowe had given up his Animal Welfare Act license, he relocated the animals to a facility in the town of Thackerville and continued to exhibit them.

“We did not do anything. We did not rat on Joe. We did not snitch on Joe,” he said. “It’s sad that people think that we set him up, but what we did was we protected ourselves.”

“Lauren and I didn’t do anything wrong, so I’m not about to take the fall for Joe’s crimes,” he added.

You can read the May 14 civil contempt finding here: