Jacob Wohl, ‘Between a Rock and a Hard Place,’ Is in Danger of Being Held in Contempt of Court 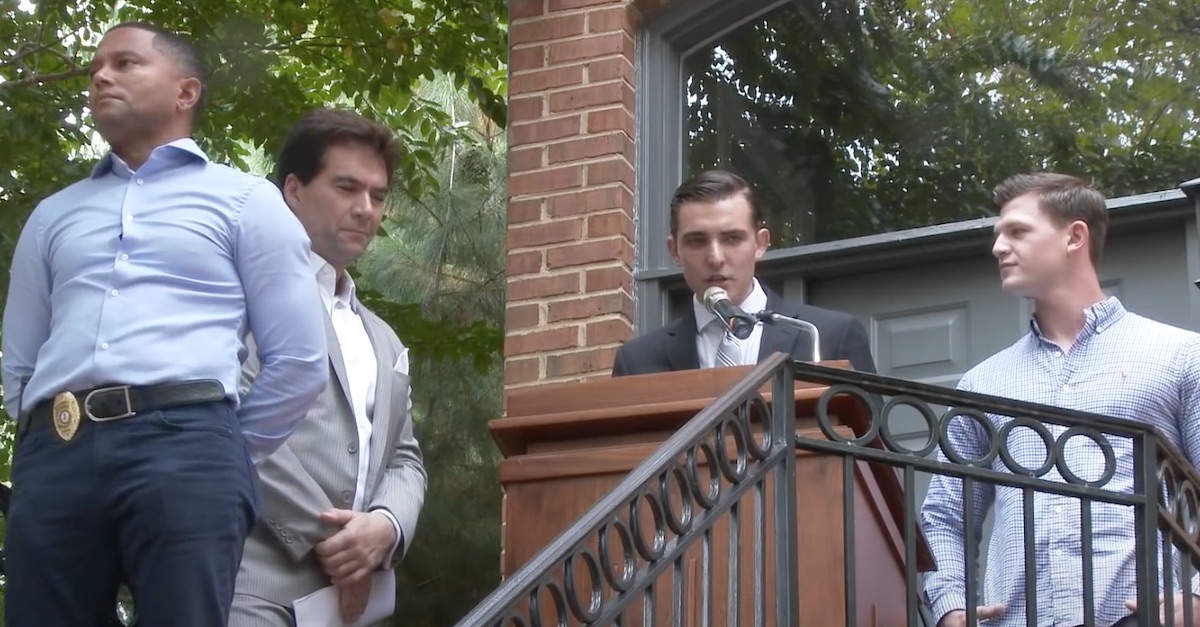 Conservative tricksters Jack Burkman and Jacob Wohl did not abide by a federal judge’s order and are in danger of being held in contempt of court during a hearing on Friday morning.

On Wednesday, Senior U.S. District Judge Victor Marrero issued a scathing 66-page opinion and order accusing Burkman and Wohl of engaging in “electoral terror” by making a series of racist robocalls targeting voters in Michigan and New York. That order also mandated the pair make a series of remedial calls to every voter they previously contacted telling them the original recorded message was both false and illegal.

Earlier on Thursday, the judge responded to a late Wednesday filing by the defense seeking a stay or reconsideration of the remedial measure order but Judge Marrero issued a brief decision rejecting that request.

In a letter motion filed with the U.S. District Court for the Southern District of New York (SDNY) late Thursday, the political operatives’ attorney David Schwartz said his clients could not possibly make the October 29 deadline for placing those remedial calls.

“Respectfully, and without relitigating the merits of your honor’s orders, there are several logistical constraints preventing [Burkman and Wohl] from being able to fully comply with these orders by the court’s 5:00 p.m. deadline,” Schwartz wrote.

The defendants’ civil attorney went on to explain that he conferred with their criminal attorney in Ohio who advised the pair not to make those court-ordered phone calls; parallel criminal investigations over the robocalls are currently underway in Michigan and Ohio.

According to that criminal attorney, Scott Grabel, an Ohio court has prohibited Burkman and Wohl from making any further robocalls and did not issue any “forbearance” of their prior order that would accommodate the SDNY court’s remedial demands.

“Therefore, Mr. Grabel’s position remains that any robocall, including a retraction, could potentially violate the Ohio criminal court’s directives and he will therefore not advise his client to do so,” the letter motion continues. “In addition, Mr. Grabel believes that such would be wholly violative of his clients’ Fifth and Sixth Amendment rights, effectively amounting to his clients being forced engage in an allocution in advance of Michigan and Ohio criminal trials, thereby undermining a host of criminal defenses available to our clients.”

Schwartz added that he “concurs with this assessment.”

The letter motion goes on to catalogue various reasons why Burkman and Wohl just can’t abide by the court’s order.

Even if [Burkman and Wohl] were able to adhere to this court’s orders, all of the data necessary to effectuate a remedial robocall is currently in the possession of Robert Mahanian of Messaging Communications. Due to the ongoing criminal matter, upon information and belief, Mr. Mahanian has been advised by his own attorney to refrain from speaking with [them]. Additionally, upon information and belief, Mr. Mahanian advised our clients in August 2020 that, as a member of the USTelecom, he and Messaging Communications are no longer willing or able to speak to them. Moreover, insofar as Mr. Mahanian is a potential witness in the criminal matter, any attempt by [Burkman and Wohl] to contact him would be tantamount to witness tampering and could jeopardize their criminal defense for various and sundry reasons. Thus, Mr. Grabel has advised his clients to refrain from any such communications…

Schwartz also takes issue with the court’s estimate of 85,309 original robocalls necessitating 85,309 remedial calls–arguing that only “5,812 of these calls actually made a connection to either an answering machine or a live person.”

If his clients were to call all 85,309 numbers originally dialed, the motion argues, Wohl and Burkman “would not as a matter of course reach the same 5,812 answering machines or live persons reached originally” and could “cause mass confusion because many of these new recipients had never received the initial call.”

The filing also claims that making such calls would improperly influence prospective witnesses in the criminal trials waiting for Burkman and Wohl in the Midwest.

“This could adversely affect witnesses or even impact potential jury pools making it impossible for our clients to receive a fair trial in Michigan or Ohio,” the motion argues.

Late Thursday, Marrero responded to Schwartz’s admission that his clients were not going to make the deadline with the following order [emphasis ours]:

On October 28, 2020, this Court issued a decision and order in the above referenced matter, granting the Plaintiffs’ motion for a temporary restraining order. That order directed defendants to, among other things, issue a curative message and “produce records sufficient to demonstrate compliance” by Thursday, October 29, 2020 at 5:00 p.m. Having received a letter from defendants on October 29, 2020, the court will hold a hearing on Friday, October 30, 2020 at 10:00 a.m. to review the status of defendants’ compliance with the October 28, 2020 decision and order and give defendants an opportunity to show cause why they should not be held in contempt of court for any noncompliance the court finds.

Schwartz, for his part, appeared to know that such a hearing was in the cards when he and attorney Randy E. Kleinman filed the letter motion.

“Without rehashing our contentions in their entirety, our clients are not in any way contemptuous of your orders; however, given the significant liberty interests at stake and the advice of their criminal defense counsel, our clients find themselves between a rock and a hard place,” Schwartz’s motion concludes. “We would note that your honor has indicated a willingness to consider further requests from defendants for alternative forms of relief. We are more than willing to discuss same at tomorrow’s hearing.”

This time, for Wohl and Burkman’s sake, at least they’ll have attorneys present.

Also, notably, Burkman and Wohl filed notice of their intent to pursue an appeal in the Second Circuit Court of Appeals.