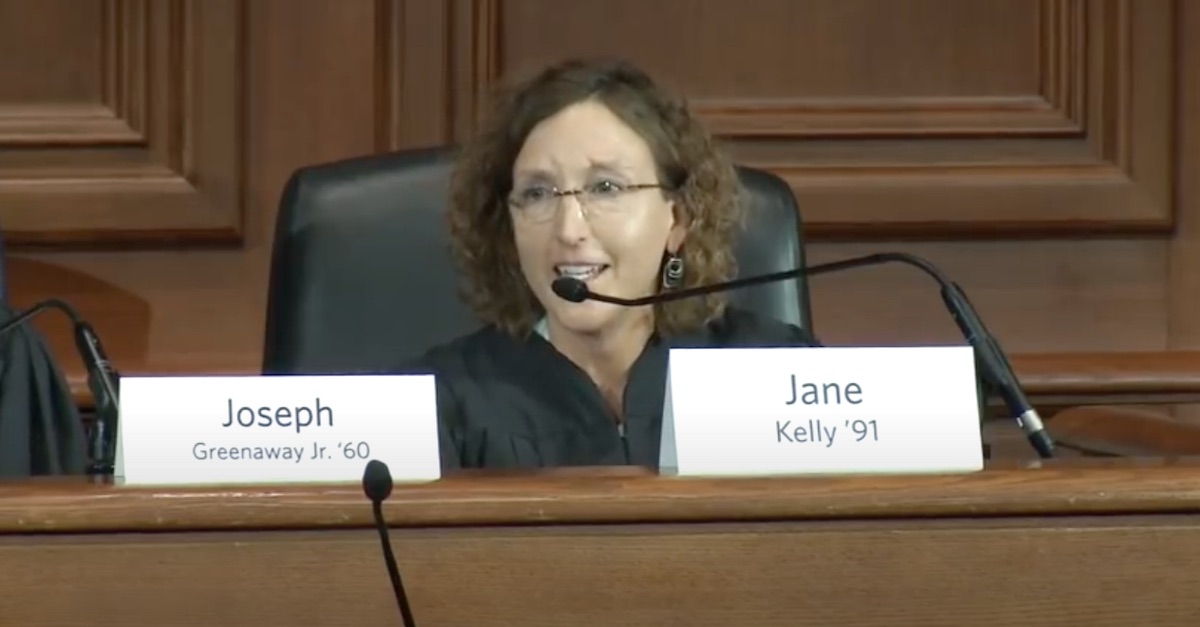 A federal appellate judge warned on Thursday that her colleagues created a “substantial risk” of disenfranchising tens of thousands of voters or more by bumping up a deadline for counting mail-in ballots by one full week. Minnesotans’ votes will not be tallied if not received by Election Day, no matter if their ballots were postmarked on time, despite the fact that the state has told residents for months that those ballots had seven calendar days to be received.

“As of October 23, almost 580,000 Minnesota voters had requested—but not yet returned—their absentee ballots. In accordance with Minnesota’s current election procedure, these voters would have until November 3 to mail or otherwise submit their ballots,” U.S. Circuit Judge Jane Kelly, an Obama appointee, noted in a blistering dissent.

In 2016, former Secretary of State Hillary Clinton squeaked by in Minnesota with just less than 45,000 votes.

“Any absentee voter who has not yet returned their ballot, and who is anxious about doing so in person because of COVID-19, especially given Minnesota’s rising case numbers, runs the substantial risk of being disenfranchised,” Kelly added.

Both of the appellate judges for the majority—U.S. Circuit Judges Bobby Shepherd and L. Steven Grasz—were appointed by Republicans. The American Bar Association unanimously rated Grasz, a Donald Trump appointee, “not qualified” for the Eighth Circuit bench in October 2017.

The majority judges insisted that they understood the impulse behind the ballot extension, if not the execution.

“However well-intentioned and appropriate from a policy perspective in the context of a pandemic during a presidential election, it is not the province of a state executive official to re-write the state’s election code, at least as it pertains to selection of presidential electors,” the majority wrote.

“The rule of law, as established by the United States Constitution and the Minnesota Legislature, dictates these rules must be followed notwithstanding the Secretary’s instructions to the contrary,” they added later. “There is no pandemic exception to the Constitution.”

Judge Kelly argued that it was her colleagues who got the election code wrong.

“The court concludes that this change to the deadline for receipt of absentee ballots violates the Electors Clause because only ‘the Legislature’ can designate the ‘manner’ of appointing electors under the Electors Clause,” she wrote. “But here the Minnesota legislature has ‘direct[ed]’ the secretary to adopt alternative procedures because a state court order prevents him from implementing a provision of the Minnesota election law. Far from ‘overriding’ the state legislature, the secretary followed a duly enacted provision of Minnesota state law when implementing alternative procedures for receiving ballots after Election Day.”

Predicting the ruling would spark post-election confusion, Kelly noted: “Four days before Election Day, they are now required to figure out new procedures for sorting ballots that will comply with the court’s order ‘to identify, segregate, and otherwise maintain and preserve all absentee ballots received after’ Election Day.”

She added that Minnesotan mail-in voters would have had to predict the outcome of the appeal in advance to comply with it.

“The court’s injunctive relief has the effect of telling voters—who, until now, had been under the impression that they had until November 3 to mail their ballots—that they should have mailed their ballots yesterday (or, more accurately, several days ago),” the dissent noted. “With the court’s injunction in place, fewer eligible Minnesotans will be able to exercise their fundamental right to vote. That, in and of itself, should give us significant pause before granting injunctive relief.”

The office of Minnesota’s Secretary of State Steve Simon did not immediately respond to an email requesting comment.

Over the past two days, the Supreme Court set aside three Republican-led challenges seeking to move up receipt of mail-in ballots to Election Day by a decisive 5-3 majority. The high court left open the possibility of hearing one of those cases at a later date.