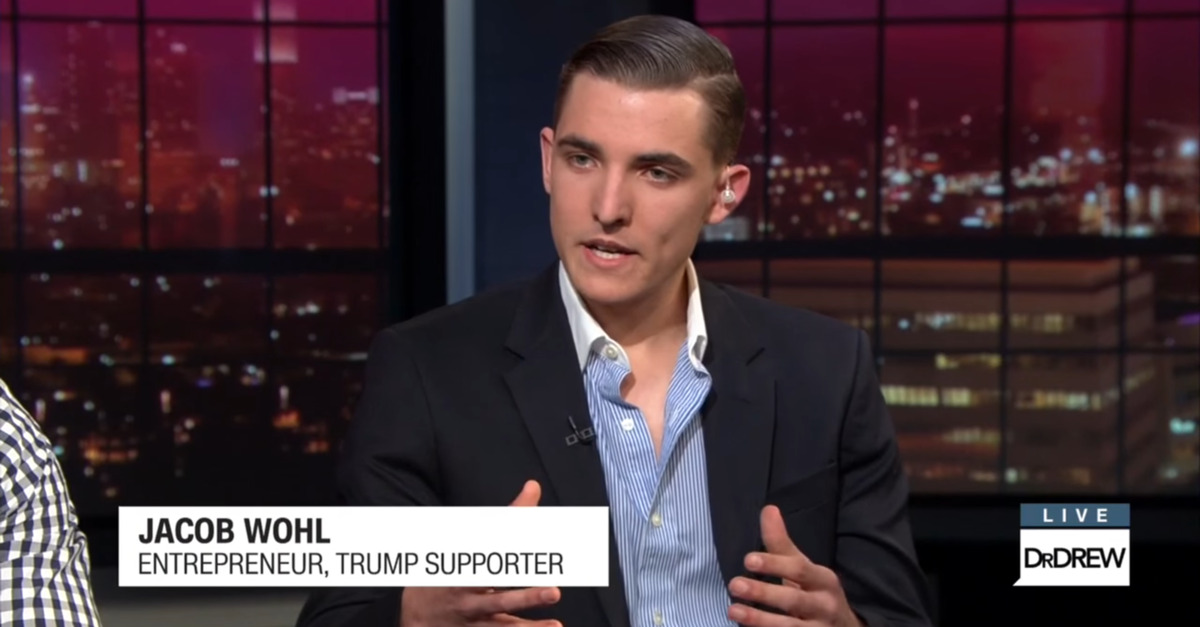 A federal judge in New York City swatted down an effort by conservative hoaxers Jack Burkman and Jacob Wohl to obtain a bit of judicial mercy on Thursday morning.

“Here, the court finds that a stay based on Fifth Amendment considerations is not warranted at this stage,” the judge’s order says. “Thus far, [Burkman and Wohl] have only been temporarily enjoined from certain conduct and required to notify robocall recipients of the court’s findings.”

On Wednesday, the U.S. District Court for the Southern District of New York (SDNY) issued an injunction against Burkman and Wohl which prohibited them from making additional robocalls before Election Day. The order also demanded that the pair contact every single voter they previously robocalled–estimated to be in excess of 85,000–and tell them that the robocalls were both false and illegal. This is the message they were ordered to convey: 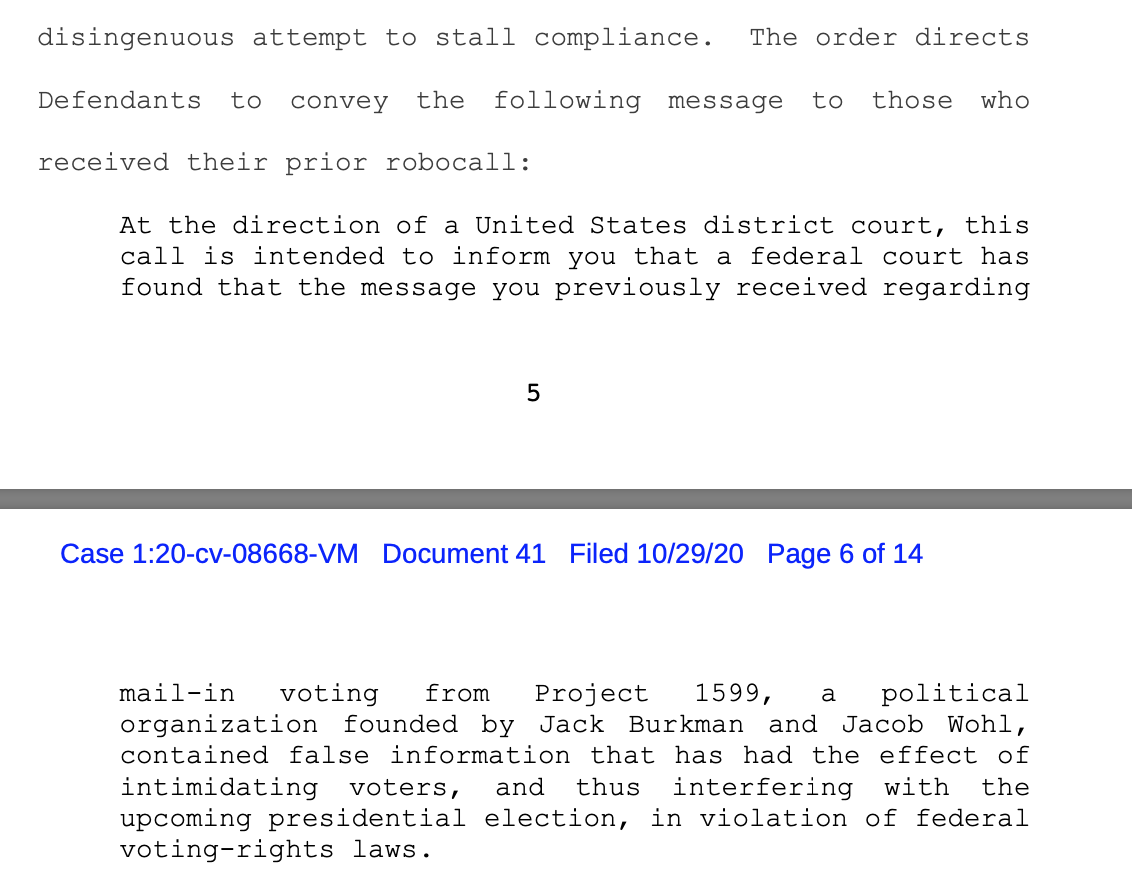 Late Wednesday, Burkman and Wohl’s attorney David Schwartz filed a motion to reargue seeking reconsideration of the order and a stay of the remedy due to their “contemporaneous criminal proceedings” in Michigan over the robocalls targeting Black voters there.

Per that now-denied motion from Schwartz:

[Burkman and Wohl] face an imminent risk of significant constitutional and liberty deprivations as a result of the court’s order insofar as it requires them to issue an incriminating statement before the conclusion of the instant matter and before the conclusion of two pending criminal matters. As a threshold matter, on October 25, 2020, [Burkman and Wohl] apprised your honor’s clerk via e-mail that they were seeking to retain counsel and were therefore seeking an adjournment of the hearing scheduled on October 26, 2020…

The requested adjournment was not granted and the hearing went forward in the civil case brought by the National Coalition on Black Civil Participation (NCBCP) against the defendants–which accused them of violating the Voting Rights Act of 1965 and the Ku Klux Klan Act of 1871 by placing upwards of 85,000 racist robocalls.

During the hearing, Wohl represented himself and that pro se effort self-evidently didn’t win him any plaudits from the bench.

Schwartz offered a play-by-play timeline of events in an effort to win the requested stay and reconsideration from Marrero. The attorney explained that his firm was contacted quite late in the game and attempted to communicate legal strategy with Burkman and Wohl, urging them to also confer with their criminal attorney, in light of the imminent hearing and its potential impact on the criminal case(s) against them. But in the end, things didn’t go as planned.

The attorney additionally made several efforts to argue that certain aspects of the robocalls were “neither baseless nor immaterial.”

The robocall contained the following message:

Mail-in voting sounds great. But did you know that if you vote by mail, your personal information will be part of a public database that will be used by police departments to track down old warrants, and be used by credit card companies to collect outstanding debt? The CDC is even pushing to give preference for mail in voting to track people for mandatory vaccines.

Per Schwartz, the above refers to so-called “skip tracing” which implicates “updated voter registration data” often used by “investigators, debt collectors and police” in order to “locate people.”

The court rejected that argument [emphasis in original]:

What Defendants had not, and still have not, established, is how this publicly available information is used, the likelihood of it being so used,1 or that the probability of its use increases when a voter votes by mail. As a reminder, Defendants’ robocall message stated that mail-in voters’ records “will be used” for law-enforcement and debt-collection purposes. While Skip Tracers may use the voter-registration information to locate people, this does not support the conclusion that debt collectors, law enforcement, or the CDC will use the information in the manner the robocall claims.

Schwartz also advocated for his clients by calling foul over the court’s remedial voter contact plan. The motion claims the order demands further robocalls and notes that a Michigan state court has already prohibited Burkman and Wohl from making any additional robocalls.

Judge Marrerro dispensed with that line of reasoning:

By communicating this message, [Burkman and Wohl] will merely be announcing this court’s findings. The court carefully scripted the message so as to avoid requiring [Burkman and Wohl] to endorse this court’s findings or express any personal views regarding their own liability. Such a message cannot plausibly be construed as containing self-incriminating material, because it contains no expression of [their] own views.

Schwartz, however, pointed to another perceived issue with the court’s suggested remedy.

“[T]he fact that a Michigan state court order prohibits [Burkman and Wohl] from issuing any robocalls is not new information that would provide a basis for reconsideration,” the SDNY court’s order notes. “In its [temporary restraining order] decision, the court explicitly considered this fact.”

Schwartz declined to comment on the specifics of the case but said he would likely be filing another letter motion in the case later this evening.