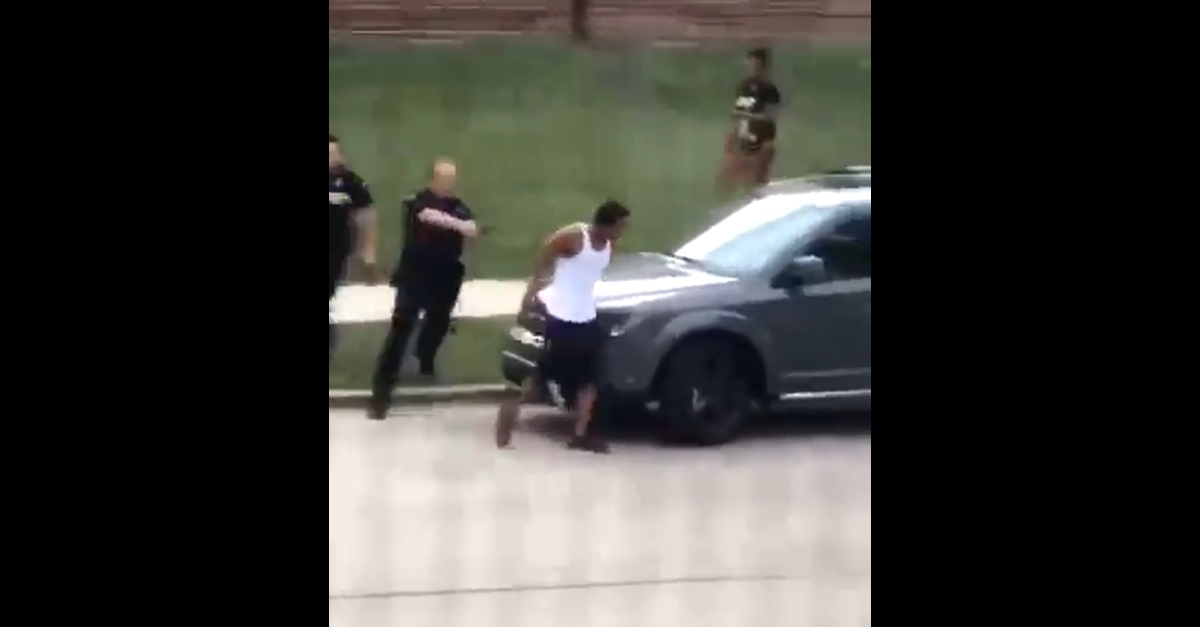 Jacob Blake, a 29-year-old Black man who Wisconsin officials say was “shot in the back seven times” by law enforcement in front of his three sons, is paralyzed from the waist down, according to his father.

Blake’s father, also named Jacob Blake, told the Chicago Sun-Times that he was driving from Charlotte, North Carolina to the hospital.

“I want to put my hand on my son’s cheek and kiss him on his forehead, and then I’ll be OK,” he said. “I’ll kiss him with my mask. The first thing I want to do is touch my son.” Blake said doctors don’t know if his son will be paralyzed permanently.

He also questioned why police fired this many shots.

The graphic video above was recorded by Raysean White, 22, on Sunday in Kenosha, Wisconsin. The footage shows Blake walking away from officers and attempting to get into his SUV. Blake’s three sons were in the car. It was then that a police officer fired multiple shots, hitting Blake in the back repeatedly. Blake appears to slump over the wheel. You can hear the vehicle’s horn honking and witnesses screaming.

A new video, which was recorded from the other side of the vehicle, showed that there was a struggle between Blake and police in the moments before Blake walked around the vehicle and opened the driver’s side door.

The civilian-recorded video is crucial because police in Kenosha don’t have body cameras.

Witnesses said that Blake had been attempting to break up a fight between two women, according to Kenosha News.

Civil rights attorney Benjamin Crump, who now represents Blake’s family, said in a statement that Blake had been trying to deescalate a domestic incident. Officers drew their weapons and used a Taser, the press release said. Blake walked away to check on his children when police opened fire, according the Crump’s office.

“Their irresponsible, reckless, and inhuman actions nearly cost the life of a man who was simply trying to do the right thing by intervening in a domestic incident,” Crump himself said in a statement. “It’s a miracle he’s still alive.”

The shooting immediately sparked protests, violence and destruction in Kenosha.

The American Civil Liberties Union weighed in on Monday by calling this shooting attempted murder.

“In yet another vicious act of police violence caught on camera, the Kenosha Police Department attempted to murder a Black man as he walked away from them by shooting him in the back, in front of his three children and his entire community,” Jeffery Robinson, director of the American Civil Liberties Union’s Trone Center for Justice and Equality, said in a statement. “With each of the seven shots fired, police made their intent clear — they believed they had the right to kill an unarmed Black man for the crime of walking away from them.”

“The Kenosha Police statement after the shooting said that they provided ‘immediate aid’ after committing this act of violence,” Robinson continued. “But rendering first aid is a basic obligation. Officers shot Jacob Blake seven times in the back; it’s offensive to act as if not letting him bleed out afterward was an act of grace rather than a mandatory response to their own violence.”

The Wisconsin Department of Justice’s Division of Criminal Investigation has said that it is investigating the shooting:

DCI is continuing to review evidence and determine the facts of this incident and will turn over investigative reports to a prosecutor following a complete and thorough investigation.

If members of the public have any further information regarding this incident, please contact law enforcement.

There has been speculation on social media about the identities of those involved in this incident. The public is advised to await identifying information from an official source.