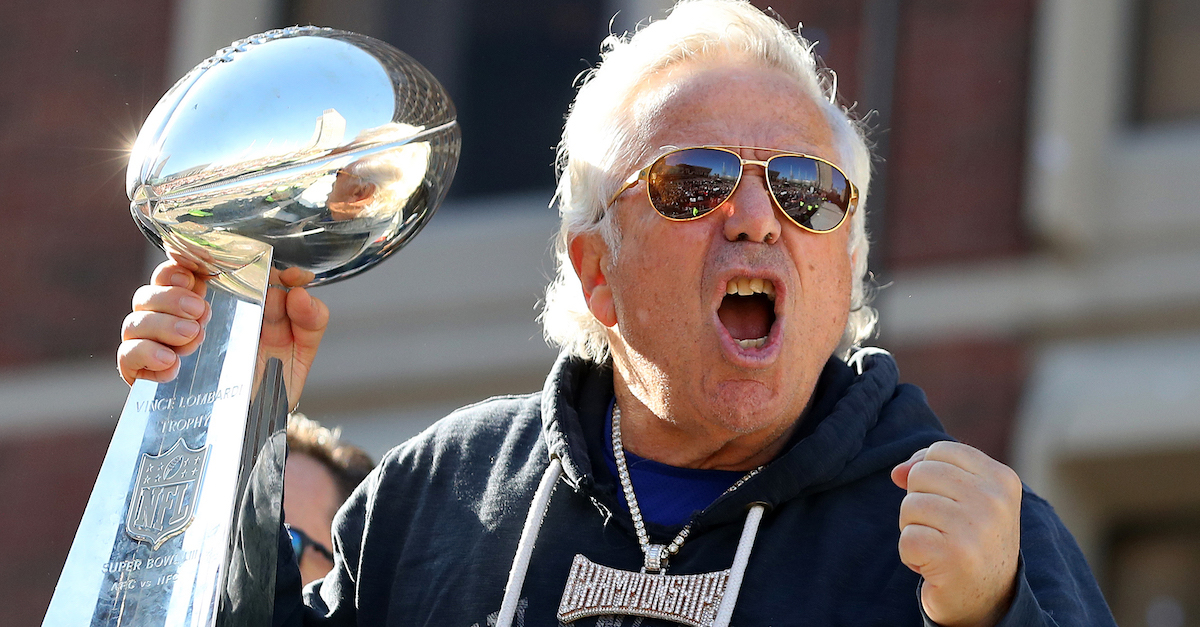 New England Patriots owner Robert Kraft and his legal team previously scored a gigantic win when a Florida judge ruled that the police search of the Orchids of Asia Day Spa (and the video evidence) was illegal. This meant that anything that happened as a result of that search (like a certain traffic stop) was inadmissible evidence in court. This is to say that there is no evidence. Although state prosecutors responded with an appeal of that ruling on Friday, it appears as if Kraft will end up emerging from this situation unscathed. Here’s why.

#BREAKING Prosecutors in Florida have just filed a notice that they're appealing the judge's order to suppress the surveillance video from Orchids of Asia Day Spa in the case of @Patriots owner Robert Kraft. The case continues… #wcvb pic.twitter.com/xk3lNf8Hf8

A hearing that had been scheduled for Friday was cancelled because the judge was not feeling well. Still, the state was still working to respond to his latest order — and it’s not hard to see why.

As Law&Crime reported from the start, the surreptitious camera installation technique police employed–that is, the execution of sneak-and-peek search warrants–were a constitutionality questionable endeavor as far as the Fourth Amendment is concerned. Police were given the go-ahead to install hidden cameras in the spa. Could Florida prosecutors’ appeal–rather than dropping of charges altogether–suggest that they are holding on for dear life in this case?

The fact that Judge Hanser ruled that the video (and anything resulting from it, such as the traffic stop) was not admissible is not a small potatoes development. It was arguably fatal for the state’s case.

“Therefore, all information obtained through the stop is suppressed as the fruit of an unlawful search,” the judge said. “Based on the foregoing, Defendant’s Motion to Suppress is granted and all obtained against Defendant through and in connection with the search warrant is suppressed.”

“Furthermore, all information obtained about Defendant as the result of the traffic stop […] is also suppressed,” the judge added.

According to the law, authorities had to follow minimization procedures for surveillance so as not to violate the Fourth Amendment, but cops didn’t do that in a meaningful way, Judge Hanser said. The concept when posed as a question: How did law enforcement reduce their surveillance of legal behavior or anything that didn’t rise to the level of probable cause? For example, the warrant said that no cameras were to be put in the kitchen, bathroom, or personal bedrooms, but spa clients were unlikely to frequent those areas, and the warrant didn’t allege criminal activity to be suspected in those areas, the judge said.

“Furthermore, the search warrant does not address how to minimize the impact of video surveillance on female Spa clients,” Judge Hanser continued.

“Failing to consider and include instructions on minimizing the impact on women, through a highly intrusive law enforcement technique in a setting with a high legitimate expectation of privacy, is a serious flaw in the search warrant, especially considering that the search warrant did not allege women were seeking illegal contact,” he continued. “The testimony indicates the videotapes of these individuals remain in the records of the Jupiter Police Department.”

“Aronberg is acknowledging he has no case without the illegal video recordings that four Florida judges have now found to be unconstitutional.  No evidence means no trial. So the State had only two options—drop the case or appeal,” Burck told Law&Crime in a statement. “They chose to appeal, but we are confident the appellate court will agree with Judge Hanser and the other judges who threw out their illegally obtained evidence.”

At this point, it appears the state is 0-4 when it comes to the aforementioned required minimization. And if it becomes 0-5 on Monday–with another judge saying the warrant altogether should be suppressed–you can imagine how that might proceed. Florida courts can’t read the minimization requirement out of the Constitution because it’s settled law.

So, where do we go from here? Expect it to drag out.

If it’s true that the state has all but admitted that it no longer has any case, then the next steps involve delay, delay, delay. Given that the search was ruled unlawful, Kraft is not the only individual who might decide to sue for having their rights violated.

Indeed, a couple dozen other men were charged as a result of the initial sting, and they might lawyer up and make the same arguments.

Kraft’s attorney William Burck previously told Law&Crime that the state was acting out of desperation.

“They know what they filed is false and misleading to the court but they did it anyway because they are desperate. That’s because they want to deflect attention away from their illegal and unconstitutional methods in investigating and prosecuting this case,” Burck said in a statement. “They first falsely accused Robert Kraft of being involved with human trafficking and then had to back off.  Now they are falsely accusing the defense lawyers of lying to the court. It’s pathetic.”

Law&Crime host and criminal defense attorney Linda Kenney Baden told Law&Crime that she believes that “without the video and the subsequent stop there is no case unless the state’s attorney can somehow force the sex worker to testify.”

Kraft was charged with two counts of misdemeanor solicitation of prostitution and has pleaded not guilty.