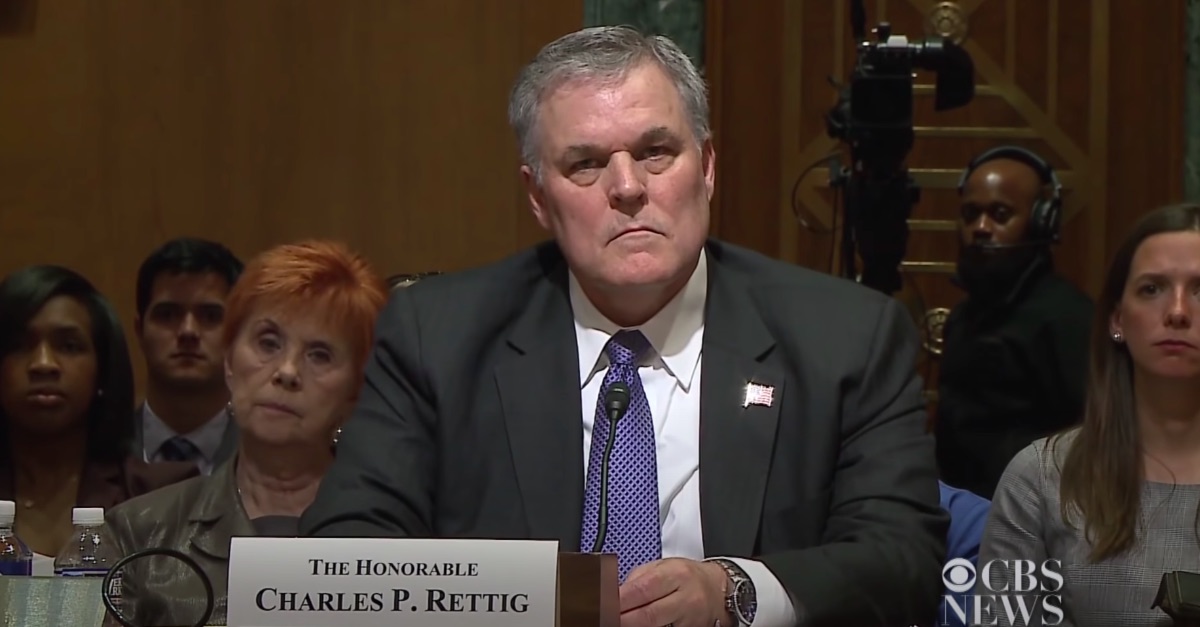 The tax attorney that President Donald Trump appointed to head the Internal Revenue Service (IRS) has raked in hundreds of thousands of dollars in profit from renting out Trump Organization properties over the last two years, government watchdog group Citizens for Responsibility and Ethics in Washington (CREW) said Tuesday.

The documents related to Charles Rettig’s finances are raising eyebrows for a couple of reasons. First, Rettig did not disclose the link to the Trump property. Second, as the IRS commissioner, Rettig has noted that he has the legal authority, but under Treasury Secretary Steven Mnuchin’s supervision, to comply with congressional requests for an individual’s tax returns.

Rettig has made between $100,000 to $200,000 annually from his 50-percent ownership in two units at the Trump International Waikiki, a property from which the president also still profits, according to CREW. Ten-percent of the purchase price Rettig paid went directly to Trump’s personal business. The report also noted that President Trump has, while in office, promoted the hotel. He stopped by to congratulate employees on a “tremendously successful” year while on his way to Asia in late 2017.

The latest financial numbers come from an analysis of Rettig’s personal financial disclosures from 2019 and 2020—despite the IRS commissioner only referring to the properties as “Residential Real Estate – Honolulu, Hawaii” and “Residential Real Estate (2) – Honolulu, Hawaii,” on the forms. Prior to his 2018 congressional confirmation hearing, Rettig disclosed that he owned two properties in Hawaii, but failed to mention where they were located or that they were in a Trump business property.

The ongoing battle over President Trump’s tax returns took another turn Tuesday. the U.S. Court of Appeals for the Second Circuit granted the president’s request to prevent enforcement of a subpoena. A U.S. district judge previously ordered Trump’s accounting firm Mazars USA to comply with the subpoena. That order is now stayed pending the outcome of an appeal. The decision, issued not long after the court heard oral arguments on the matter on Tuesday, will further delay Manhattan District Attorney Cy Vance’s potentially broad criminal investigation.

In the order, the court set some deadlines. Trump lawyers have to file a brief by Sept. 11, while Vance’s office must respond by Sept. 21. Thereafter, oral arguments on Trump’s appeal will be held on Sept. 25. Whatever happens, a petition for an en banc rehearing could follow; so could an appeal to the Supreme Court.