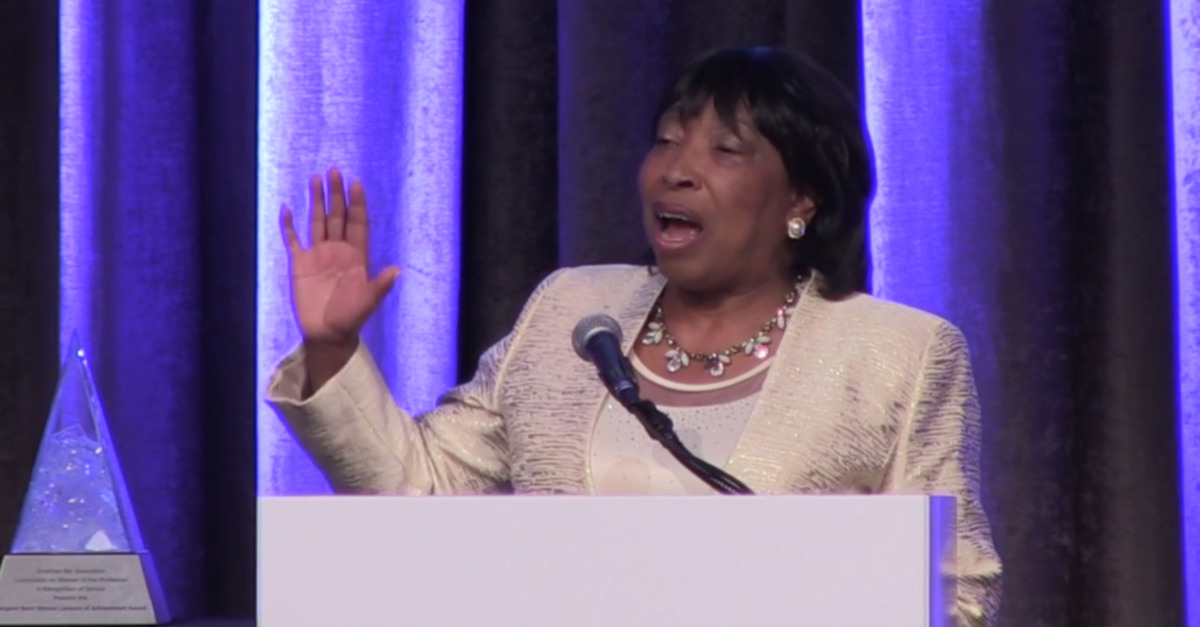 A federal appeals court judge issued a brutal denunciation of her colleagues’ decision upholding a restrictive abortion law in Kentucky. In a 2-1 panel decision issued late Thursday afternoon, the Sixth Circuit Court of Appeals upheld a law requiring physicians performing abortion procedures to first subject women to ultrasounds while advising them of certain information about the fetus.

“Because H.B. 2 requires the disclosure of truthful, non-misleading, and relevant information about an abortion, we hold that it does not violate a doctor’s right to free speech under the First Amendment,” wrote Judge John Bush for the conservative majority,

Judge Bernice Bouie Donald was, essentially, not having any of it.

Though the opinion quickly concluded the First Amendment is not implicated by Kentucky’s ultrasound law, the dissent noted that the majority’s argument is largely based on abortion jurisprudence stemming from the 14th Amendment.

“This is a First Amendment case,” Judge Donald notes. “Although the challenged statute affects abortion, the question before this Court is not whether the statute unduly burdens a woman’s right to choose. The question is how the statute—which compels specific speech and actions by physicians—impacts a physician’s First Amendment rights. The majority misses this critical distinction.”

As Donald argues, the decision’s first reference to law is the Supreme Court’s landmark decision in Roe v. Wade. The purported First Amendment case law relied upon by Bush in the above-quoted language refers to another landmark abortion case, Planned Parenthood of Southeastern Pennsylvania v. Casey.

Judge Donald goes on to argue that a physician’s speech can only be compelled by the government when it is intrinsically related to the “practice of medicine” such as when such a doctor asks for a patient’s informed consent to undergo a medical procedure.

But, the dissent argued, fetal heartbeat law has nothing to do with medicine [italics in original]:

At issue in this case is H.B. 2, a law that has no basis in the practice of medicine. Prior to performing an abortion, H.B. 2 requires physicians in the Commonwealth of Kentucky to conduct an ultrasound (oftentimes using a transvaginal probe) while simultaneously describing the fetus with particularity, displaying the sonogram images, and playing aloud the fetus’ heartbeat to the patient. Moreover, the physician is not permitted to exercise his or her medical judgment in deciding whether the procedure is appropriate or ethical.

The problem, therefore, is compelling physicians to issue medically unnecessary political messages. Donald says the majority made a clear legal error by transposing an undue burden argument–abortion jurisprudence–into what is, at heart, a First Amendment case. And, to be clear, this is a novel interpretation/use of existing case law.

“[I]magine if a state passed a law requiring all gun owners to turn in their guns for just compensation, and this Court upheld the law under the Second Amendment, but relied only on facts from Takings Clause jurisprudence,” Judge Donald analogized. “The outcome would be flawed because the issues are distinct. The same is true in this case.”

[W]hat if the state required an attorney, prior to filing a complaint, to inform each medical-malpractice plaintiff that pursuing her claim would burden the state’s resources, incur reputational harm for the physician, and make healthcare less accessible to the community? Any attorney would find this to be a repugnant invasion of the attorney-client relationship. Yet, pursuant to the deferential standard adopted by the majority today, the state is the sole and final arbiter of what constitutes the practice of any profession, including the law.

The dissent then went on to goad the majority by suggesting they’d find such regulations, if applied to the realm of law, an “Orwellian” intrusion on life and liberty.

“The Commonwealth has coopted physicians’ examining tables, their probing instruments, and their voices in order to espouse a political message, without regard to the health of the patient or the judgment of the physician,” Judge Donald continues. “Armed with the title ‘informed consent,’ the majority affirms this practice as constitutional.”

The passage concluded with a thundering invocation of a Founding Father:

Benjamin Franklin warned that “[f]reedom of speech is a principal pillar of a free government; when this support is taken away, the constitution of a free society is dissolved, and tyranny is erected on its ruins.” H.B. 2 is a restriction on speech that has no basis in the practice of medicine. It should be subjected to heightened scrutiny and deemed unconstitutional, lest our constitution dissolve, and tyranny be erected on its ruins. I dissent!