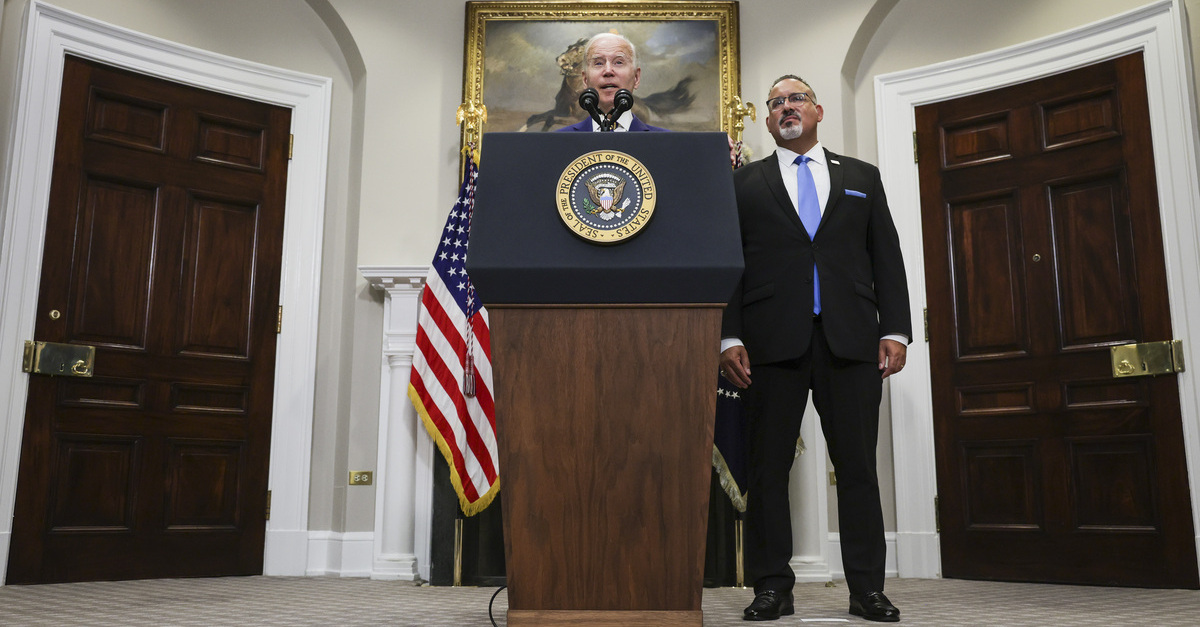 U.S. President Joe Biden, joined by Education Secretary Miguel Cardona, speaks on student loan debt in the Roosevelt Room of the White House August 24, 2022 in Washington, DC. President Biden announced steps to forgive $10,000 in student loan debt for borrowers who make less than $125,000 per year and cap payments at 5 percent of monthly income.

President Joe Biden on Wednesday announced a long-awaited and long-delayed plan to forgive small amounts of student loan debt that is currently held by the U.S. Department of Education.

The Biden administration describes the move as “a three-part plan” in a lengthy fact sheet released on the White House website.

The broad outlines of the plan include zeroing out $10,000 worth of federally-held debt for most debtors and $20,000 worth of such debt for those who received Pell Grants, substantially lowering monthly payments, and having the government cover borrowers’ monthly interest payments so that principal amounts no longer increase.

The administration and the president himself have billed the move as the fulfillment of a 2020 campaign “promise,” though Biden had promised to “forgive all undergraduate tuition-related federal student debt from two- and four-year public colleges and universities and private HBCUs and MSIs for debt-holders earning up to $125,000.”

While the 46th president’s plan was all but uniformly criticized on the right and generally met with some combination of praise and criticism for not going far enough on the left, the administration will not have to go through Congress because the authority relied upon is executive in nature.

No new money will be created to pay for the debt relief plan because the executive branch has long held the authority to cancel student loan debt by way of the Department of Education. The basic authority of the DOE to cancel such debt is not contested. Even former DOE secretary Betsy DeVos, a staunch critic of broad-based student debt cancellation, canceled $150 million worth of debt for certain students. In fact, she was actually forced to do so after being sued and losing in federal court. Litigation related to those cases is still ongoing.

As the COVID-19 pandemic struck, then-President Donald Trump used executive authority to initiate the popular and extant pause on student loan repayments and interest accrual – which Biden embraced and is keeping in effect until the end of the year.

The initial Trump policy, renewed multiple times by Biden, was premised on the coronavirus pandemic being classified as a “National Emergency” under the Public Health Service Act of 1944.

Trump’s administration (and Biden’s) rested that authority on the Higher Education Relief Opportunities for Students (HEROES) Act of 2003, which authorizes the secretary of the DOE to “waive or modify any statutory or regulatory provision applicable to” the Title IV loan programs “as the Secretary deems necessary” to ensure that individuals adversely affected by a Presidentially declared national emergency “are not placed in a worse position financially.”

In a pair of legal memoranda, two separate agencies within the Biden administration outlined the legal authority relied upon for Wednesday’s watershed announcement of wide-ranging student debt relief. Each of the two memos heavily cites the HEROES Act.

The first memo, issued by the U.S. Department of Justice Office of Legal Counsel (OLC) summarizes at the outset: “the [HEROES Act] grants the Secretary of Education authority to reduce or eliminate the obligation to repay the principal balance of federal student loan debt, including on a class-wide basis in response to the COVID-19 pandemic, provided all other requirements of the statute are satisfied.”

The heart of the analysis reads, at length [emphasis in original]:

You have asked whether the HEROES Act authorizes the Secretary to address the financial hardship arising out of the COVID -19 pandemic by reducing or canceling the principal balances of student loans for a broad class of borrowers. We conclude that the Act grants that authority. The plain text of the HEROES Act authorizes the Secretary to “waive or modify any statutory or regulatory provision applicable to” the federal student loan program, an authority that encompasses provisions applicable to the repayment of the principal balances of loans, provided certain conditions are met. We conclude that targeting relief towards those individuals who suffered financial hardship because of COVID -19 and who otherwise satisfy the requirements of the Act accords with the Act’s requirement that the waiver or modification “be necessary to ensure that” student loan recipients who are “affected” by a national emergency “are not placed in a worse position financially” with respect to their loans as a result. Further, we believe that the Secretary may reasonably conclude that class-wide debt relief in these circumstances is appropriate.

The conclusion of the memo reiterates the above analysis:

[W]e conclude that the Secretary can exercise the waiver or modification authority granted by the HEROES Act of 2003 to reduce or cancel the principal balances of student loans, provided the Secretary deems the reduction or cancellation necessary to ensure that affected individuals are not placed in a worse position financially in relation to their financial assistance because of their status as affected individuals. We further conclude that reducing or canceling the Use of the HEROES Act of 2003 to Cancel the Principal Amounts of Student Loans 25 principal balances of student loans, including for a broad class of borrowers who the Secretary determines suffered financial harm because of COVID-19, could be a permissible response to the COVID-19 pandemic.

The 25-page OLC memo goes on to offer a historical rundown of the federal student loan program and distinguishes less extensive precursor legislation to the HEROES Act while also rubbishing a late-stage Trump administration effort to forestall broad-based student debt cancellation. In a memo released after the Jan. 6, 2021 attack on the U.S. Capitol Complex, DOE attorney Reed Rubinstein “memorialized” the prior administration’s position on debt cancellation.

“The Rubinstein Memorandum by and large did not engage with any of this textual evidence in its cursory analysis of the HEROES Act,” the memo signed by Assistant Attorney General Christopher Schroeder argues. “The memorandum failed to consider the implications of the fact that the statute grants the Secretary authority both to ‘waive’ and to ‘modify’ provisions of law.”

The second, much shorter, five-page memo by DOE General Counsel Lisa Brown offers its own series of arguments:

Several provisions of the HEROES Act indicate that Congress intended the Act to confer broad authority under the circumstances, and for the purposes, specified by the Act. First, the Act grants authority “[n]otwithstanding any other provision of law, unless enacted with specific reference to this section.” Second, the Act authorizes the Secretary to waive or modify “any” statutory or regulatory provision applicable to the student financial assistance programs. Third, the Act expressly authorizes the Secretary to issue such waivers and modifications as he “deems necessary in connection with a war or other military operation or national emergency.”

“In present circumstances, this [HEROES Act] authority could be used to effectuate a program of categorical debt cancellation directed at addressing the financial harms caused by the COVID-19 pandemic,” the DOE memo says. “The Secretary could waive or modify statutory and regulatory provisions to effectuate a certain amount of cancellation for borrowers who have been financially harmed because of the COVID19 pandemic.”

The second memo also suggests that Rubinstein’s memo be formally revoked because of its alleged legal deficiencies.

“Having reviewed the memorandum in consultation with the Office of Legal Counsel, we have determined that although it accurately describes the core features of the HEROES Act, its ultimate conclusions are unsupported and incorrect,” the DOE lawyer argues. “As such, it should be rescinded.”