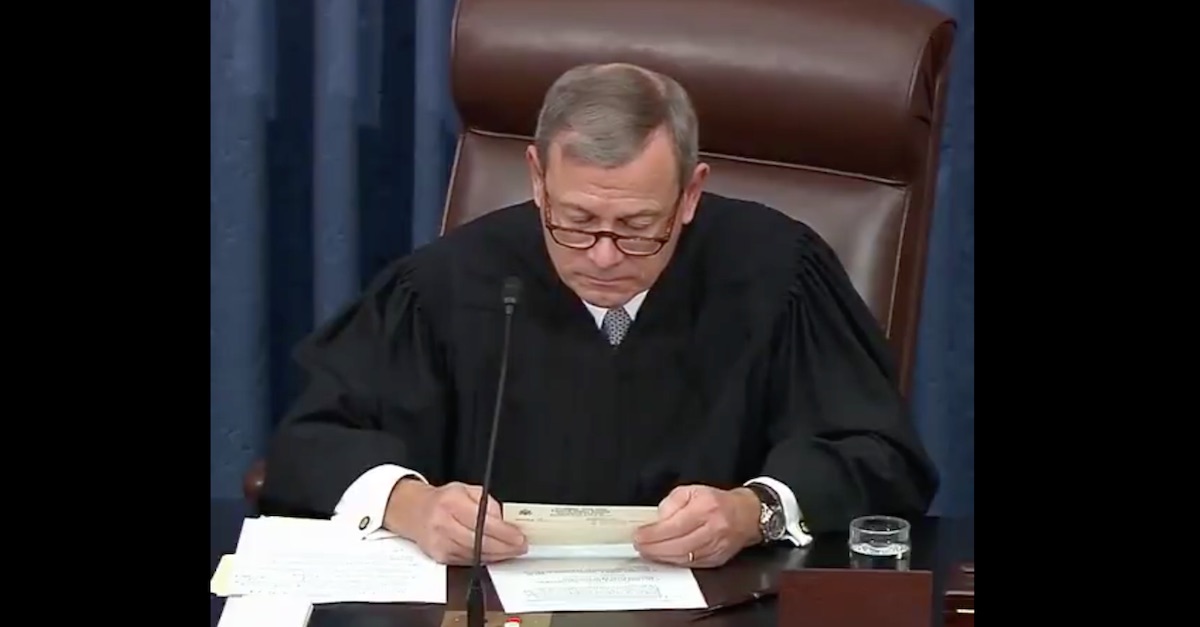 The impeachment trial of President Donald Trump came to an end Wednesday when the Senate acquitted him on charges he abused the power of his office and obstructed Congress. Sen. Mitt Romney (R-Utah) was the lone Republican senator to vote for conviction, and that was only for the first article of impeachment. Before officially bringing the proceedings to a close with one final bang of his gavel, Supreme Court Chief Justice John Roberts made a brief closing statement regarding his constitutionally ambiguous role presiding over the trial.

“I’d like to begin by thanking the Majority Leader and the Democratic leader for their support as I attempted to carry out ill-defined responsibilities in an unfamiliar setting. They ensured that I had the wise counsel of the Senate itself through its secretary and its legislative staff,” Roberts said.

He also thanked the Senate parliamentarian and deputy parliamentarian for their “unfailing patience and keen insight,” as well as the Sergeant at Arms and his staff for their help during his “required residency” overseeing the proceedings.

Roberts also thanked the lawmakers for being “generous hosts” and making him feel “as comfortable as possible,” issuing an open invitation to any members of Congress that might want to drop by the courthouse to “see an argument.”

“Or to escape one,” he jokingly added.

Roberts’s cordial remarks provided a stark digression from the often rancorous tone of the highly partisan trial. After one highly contentious exchange last month, the Chief Justice actually halted the proceedings to scold both the House Managers and President Trump’s defense team.

“I think it is appropriate for me to admonish both the House managers and the President’s counsel in equal terms to remember that they are addressing the world’s greatest deliberative body,” Roberts said during the opening phase of the trial. “One reason it has earned that title is because its members avoid speaking in a manner and using language that is not conducive to civil discourse.”

In another instance, Roberts refused to read Sen. Rand Paul’s (R-Ky.) question, which, if it was allowed, may or may not have outed the whistleblower.

Paul was ultimately undeterred by this.

”I leave you now a wiser, but not a sadder man,” Rehnquist said. ”I have been impressed by the manner in which the majority leader and the minority leader have agreed on procedural rules in spite of the differences that separate their two parties on matters of substance. I have been impressed by the quality of debate in closed session on the entire question of impeachment as provided for in the Constitution.”

Roberts’ closing statement was, for obvious reasons, nowhere near this laudatory. https://t.co/D8nYrDrm9x

The then-Chief Justice also noted that “agreed-upon procedures for airing substantive divisions must be a hallmark of any great deliberative body” before closing the trial.