Which States Gained and Lost Seats in the 2020 Census? 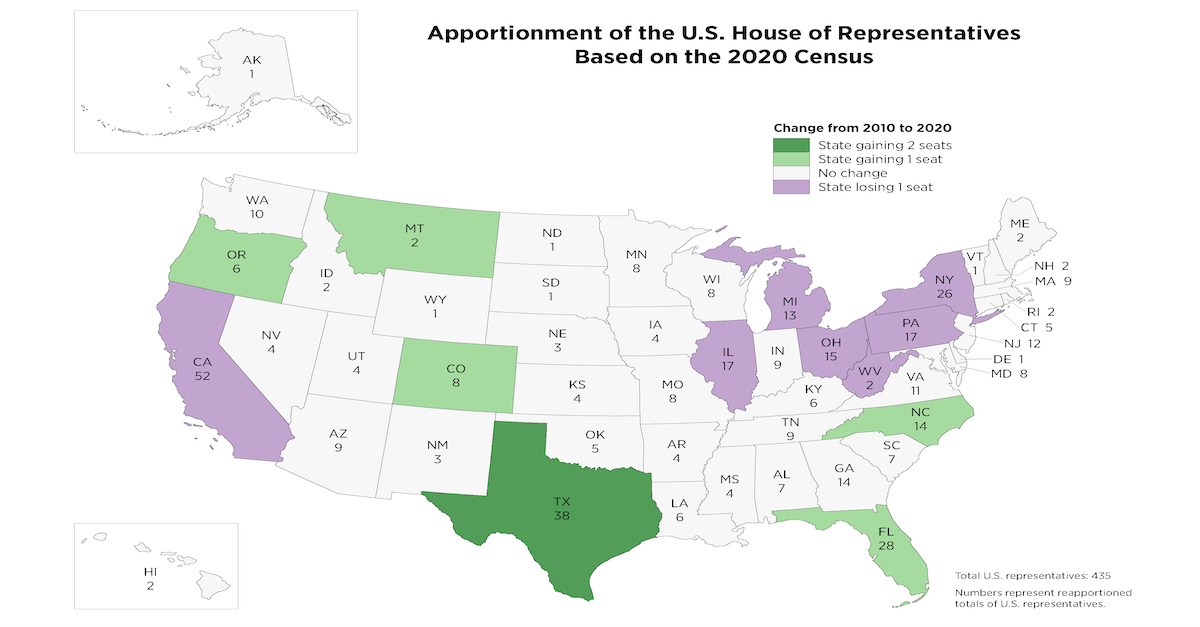 The Census Bureau released this map of apportionment on Monday.

The U.S. population has topped 331 million people, with political power shifting from the Northeast and Midwest to the West and South, the Census Bureau reportedly found on Monday.

The map released by the Census Bureau showed Texas gaining two seats. Florida, North Carolina, Colorado, Montana, and Oregon each gained one. Along with California and West Virginia as outliers, a cluster of states across the Northeast and Midwest each lost one. The other states to lose a seat were New York, Michigan, Pennsylvania, Ohio, and Illinois.

Asked during a press call whether the rising Latino population helped give the Lone Star State its robust boost, the bureau’s population chief Karen Battle replied: “At this point in time, we actually don’t have final numbers to share about the Hispanic population at this time.” 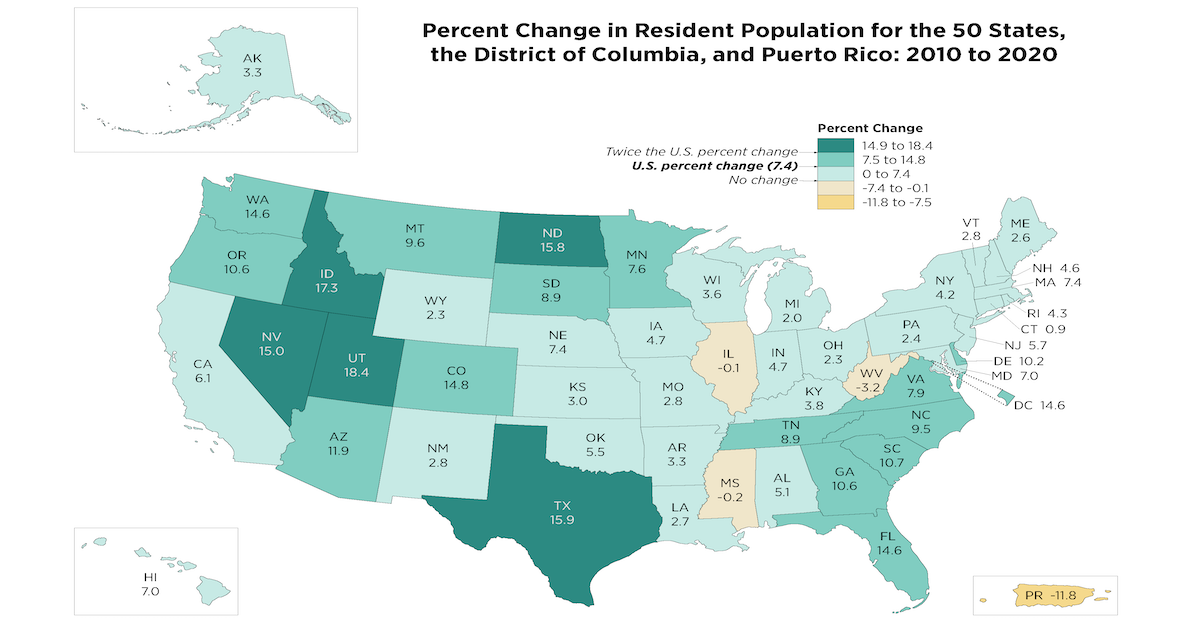 In a related map, the Census Bureau illustrated shifts in population by state and U.S. territory. As the question of statehood hovers over the archipelago, Puerto Rico experienced a net population decrease of 11.8 percent between 2010 and 2020.

Despite modest population increases between these years, New York (4.2%) and California (6.1%) did not boost their residencies enough to keep their total seats. The same was true of Wisconsin, which experienced 3.6% boost in their population in the last decade.

By contrast, the population rate shifts in Texas, Florida and Oregon each jumped by double-digits.

So did Georgia, which stunned many by flipping blue last year and delivering the White House and the Senate to the Democrats. The 10.6% jump in population, however, did not come with more congressional seats.

“Based on voter registration and turnout data, we know that communities of color represent an increasing share of Georgia’s population,” Dennis said in a statement. “These growing communities deserve to have fair representation, in Congress and in both chambers of the Georgia General Assembly.”

Dennis noted that Georgia does not have an independent redistricting commission, creating the possibility that district maps will be drawn by the same politicians likely running for reelection.

“Common Cause Georgia urges the Legislature to use a transparent and accessible process for redistricting,” Dennis said. “New maps may not be subject to the preclearance provisions of the Voting Rights Act, but they will still have to comply with the remaining provisions of the Act. Racially gerrymandered maps can still be appealed to federal courts and can still be held unconstitutional.”

Falling in the final years of the Donald Trump presidency, the once-in-a-decade survey was the subject of extensive litigation over claims that the Republican president tried to game political apportionment with illegal efforts to exclude non-citizens. The Trump administration’s measures largely failed, with the Supreme Court rejecting the inclusion of a citizenship question and his Department of Commerce failing to complete the count within his tenure.

Update—April 26 at 6:36 p.m. Central Time: This story has been updated to include comment from Common Cause Georgia, a non-profit group.

(Maps courtesy of the Census Bureau)