A public defender in Harris County, Texas is seeking a posthumous pardon on behalf of George Floyd, 46, because the arresting officer in a 2004 case had an alleged pattern of fabricating evidence.

“Though pardons are, of course, rare and discretionary, and posthumous pardons all the more so, the instant case is one where truly, a pardon is merited,” attorney Allison Mathis wrote in the application for clemency. “A pardon would not give back the 10 months George Floyd spent in State Jail, away from his children and his mom. It wouldn’t erase the memory, personal or institutional, of this thing that happened to him, or the things that would happen to him later. In its own small way, though, this pardon would correct the record. It would show that the State of Texas is interested in fundamental fairness, in admitting its mistakes, and in working to increase the accountability for police officers who break our trust and their oaths, and harm our people rather than serve them.”

#BREAKING An attorney with the Harris County Public Defender’s Office has just applied for a posthumous pardon for #GeorgeFloyd – for the 2004 drug charge he got in Houston, when he was arrested by a cop now accused of fabricating informants. pic.twitter.com/AvjZzGMeuW

Floyd became known nationwide and around the world after video filmed by bystanders on May 25, 2020 showed Minneapolis police arresting him for the alleged use of a counterfeit $20 bill at Cup Foods. Then-officer Derek Chauvin kept his knee on Floyd’s neck for what prosecutors timed as nine minutes and 29 seconds. Floyd cried out in pain, becoming increasingly unresponsive as bystanders tried to intercede on his behalf. Authorities dragged Floyd’s limp body onto a gurney and took him to a hospital, where he was pronounced dead.

“There was nothing there,” said prosecutor Steve Schleicher in closing arguments last Monday.

Chauvin was fired from the police department with co-defendants Tou Thao, 40, J. Alexander Kueng, 26, and Thomas Lane, 37. Chauvin was convicted last Wednesday on all charges, including unintentional second-degree murder and third-degree murder. The other former officers are set for trial on charges of aiding and abetting to begin in August.

Prosecutors acknowledged Floyd had meth and fentanyl in his system when he died. Citing expert testimony, however, the prosecution said Floyd died because the way Chauvin restrained him cut off oxygen.

That brings us to retired Houston police officer Gerald Goines. According to the new pardon application, he is the officer who arrested Floyd on February 5, 2004 in Harris County, Texas. Floyd was charged with delivery of a controlled substance for allegedly possessing .03 grams of crack cocaine during his arrest. Goines alleged that the man gave the drugs to a “second suspect.” As told by the application, Goines’ account was that this second person cooperated with police and was going to be used as a confidential informant.

Floyd faced sentencing enhancements that would have labeled him a habitual offender and gotten him a possible punishment of at least 25 years in prison. Rather than risk that, he opted to plead guilty.

“Like many people forced through the twisted criminal justice system in the United States, Floyd confessed to save his life,” attorney Mathis wrote.

Years later, scrutiny surrounds Goines and he’s out of a job as a police officer. He allegedly lied about using two confidential informants to get drugs. From this, Houston police got a no-knock warrant, leading to a catastrophic raid in which officers killed couple Dennis Tuttle, 59, Rhogena Nicholas, 58,  and their pitbull. Four officers were shot; a fifth was injured in the incident. 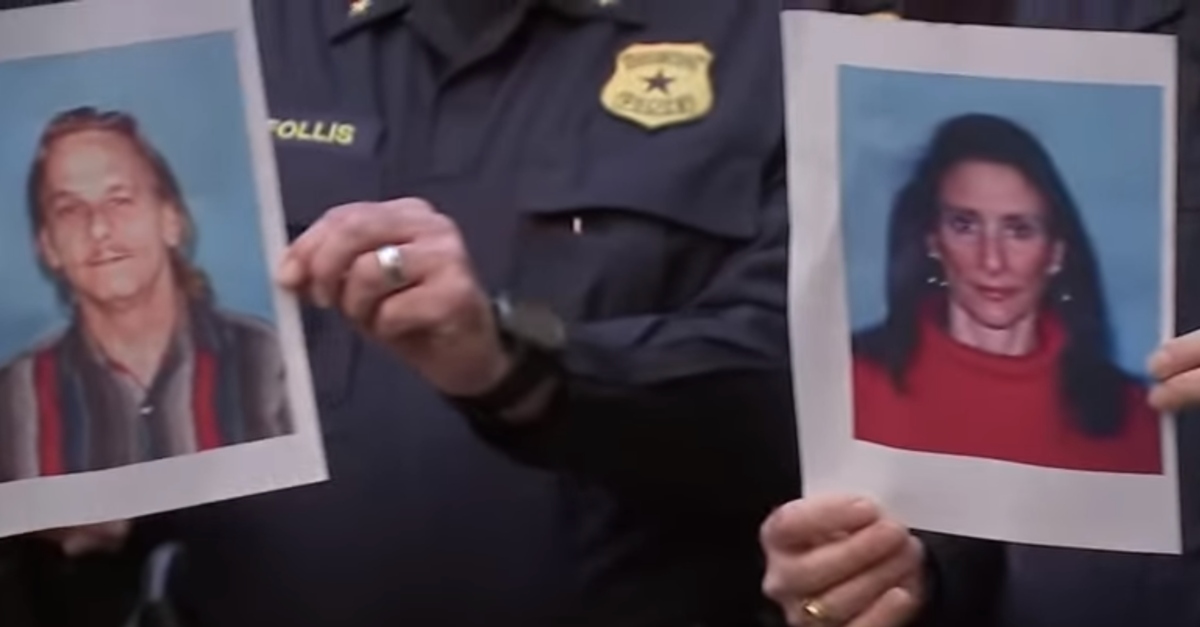 “We used to call each other sister,” Esmeralda Becerra, a friend of Nicholas, told Fox 26 Houston in a January 2020 report. “Every day we used to have breakfast, and I miss her a lot. Her and Dennis.”

Now Goines is charged with murder, prosecutors have been taking a hard look at cases he worked on, and a wrongfully convicted man who spent seven years in prison sued him and the city. Mathis drew a parallel between the officer’s alleged M.O., and the way he arrested Floyd.

“Gerald Goines manufactured the existence of confidential informants to bolster his cases against innocent defendants, consistent with the unnamed, unidentified ‘second suspect’ he mentions in his offense report in his interaction with George Floyd,” she wrote.

And, to be clear, this does not mean that he’s pardoned — just that someone has applied on his behalf. The parole board still has to make a recommendation and then the governor has to decide.

The office of Texas Governor Greg Abbott (R) did not immediately respond to a Law&Crime request for comment.