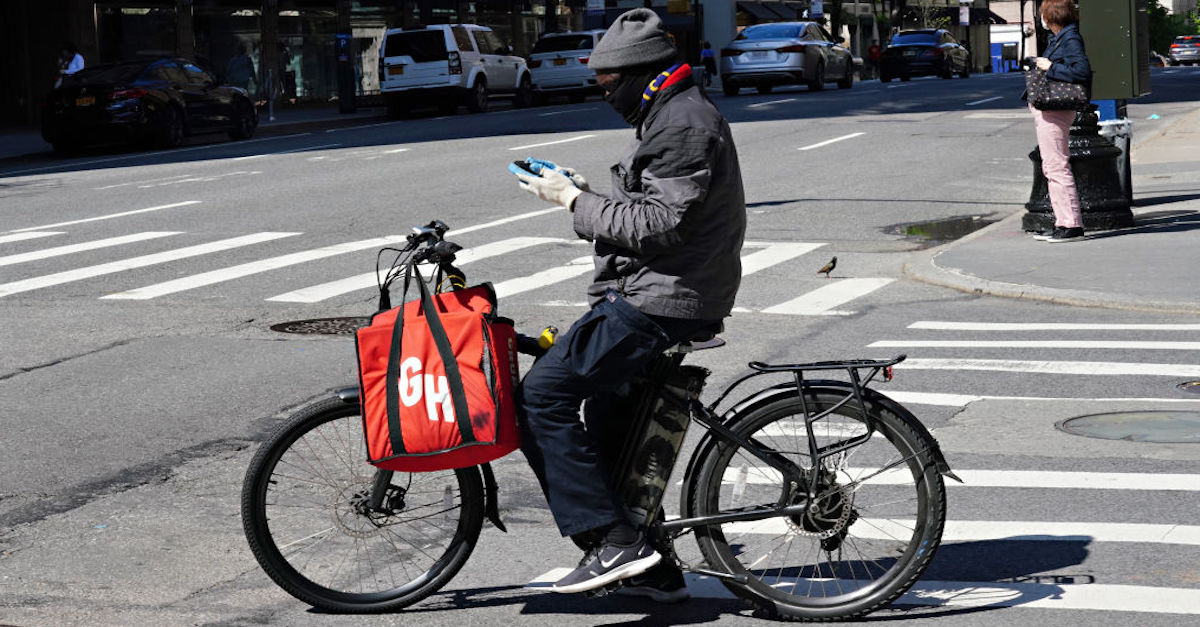 NEW YORK, NY: A Grubhub delivery person checks his phone during the coronavirus pandemic on May 3, 2020 in New York City. (Photo by Cindy Ord/Getty Images)

A class-action lawsuit accusing the nation’s most well-known food delivery services of monopolizing markets and price-fixing can move forward, a federal judge ruled.

The named plaintiffs in the case are customers who have ordered from Grubhub, Postmates, and UberEats. They claim that by requiring participating restaurants to sign oppressive contracts that limit what they can charge for their food, the apps are essentially forcing restaurants to inflate their prices.

According to the complaint, the food delivery apps require that restaurants sign a “no-price competition clause” (NPCC) in the standard contract. Under the NPCC, a restaurant is not allowed to set lower food prices on any other food ordering platform, including for dine-in customers and customers who order takeout or delivery directly from the restaurant.

The plaintiffs say that denying restaurants the ability to adjust their prices limits their ability to attract customers by offering, for example, lower prices for ordering directly from the restaurant or dining in.

The plaintiffs’ complaint accuses the delivery apps of “cannibalizing” restaurants’ dine-in market, and claims to be bringing the lawsuit “on behalf of all Americans who would still to enjoy a nice dinner out with their family before Defendants make that impossible.”

In addition, according to court documents, the NPCCs for Grubhub and Uber prevent restaurants from charging lower prices to consumers who purchase their meals on rival restaurant platforms.

The result, according to plaintiffs, is that the NPCC essentially acts as an “unlawful price restraint that prevents restaurants from gaining marketshare and increased profitability per consumer by offering lower prices to consumers.”

The lawsuit was filed in April 2020, shortly after the coronavirus pandemic forced the shutdown of restaurants nationwide. DoorDash was originally also named as as defendant, but was dropped from the case in May of 2021 and was not part of the amended complaint that the other three services sought to dismiss.

Lawyers for the delivery apps argued that the plaintiffs hadn’t shown that “direct” consumers—those who ordered directly from the restaurant, either by phone or by dining in—weren’t harmed by the NPCCs.

“The injury that [customers] sustained by paying supracompetitive prices was direct,” Kaplan, a Bill Clinton appointee, wrote in his ruling.

Kaplan said that the plaintiffs also plausibly alleged that restaurants cannot avoid doing business with the delivery apps because restaurants need access to the platforms’ customers “in order to generate sufficient sales to make up for their low margins.

Statistics included in the court filings say that Grubhub, Uber, and Postmates, along with Doordash, make up 98 percent of the market for online restaurant delivery in the U.S.

According to Kaplan, the facts from the plaintiffs “paint a plausible picture” of the “anticompetitive effects” of the NPCCs the apps require the restaurants to sign.

“The NPCCs explicitly prevent restaurants from selling their goods at lower prices through ‘distribution systems with lower cost structures,’ i.e., in the direct markets, where costs are lower because no commission rates are added to the list prices of restaurant meals,” Kaplan said in his ruling.

Kaplan said that the combination of the NPCCs, the high commission rates the apps charge, and restaurants’ slim profit margins result in customers paying higher prices.

“All of this, together with Plaintiffs’ well-pleaded allegation that Defendants’ commission rates match or exceed most restaurants’ profit margins, supports the reasonable inference that restaurants—being foreclosed from lowering prices in the direct markets to attract sales—have had no choice but to raise prices in both the platform and direct markets,” Kaplan’s ruling said. “Plaintiffs’ anecdotal and survey evidence permits an inference or conclusion that restaurant owners have done just that.”

The order allowing the case to proceed doesn’t necessarily mean the plaintiffs will win at trial, just that they’ve alleged facts that—if true—would prove their allegations.

“We are disappointed in the decision and we will continue to defend our business and the services we offer restaurants and diners,” a Grubhub spokesperson told Law&Crime.

Editor’s note: the headline of this piece originally included a reference to DoorDash, which was dropped from the case, and has been edited accordingly.