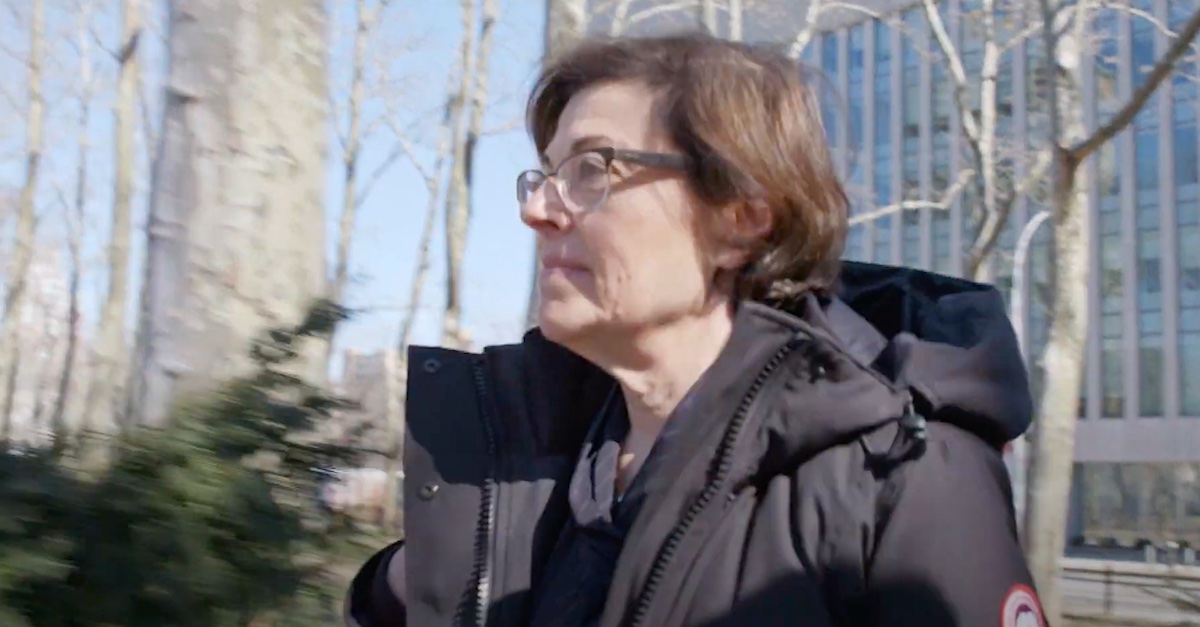 Federal prosecutors on Wednesday asked a judge to impose a “high end” sentence for Nancy Salzman, the president of a group led by Keith Raniere and described by prosecutors as an organization rife with sex trafficking and forced labor.

The group, NXIVM, billed itself as a self-help organization while Salzman was second to sex cult leader Raniere in the group’s leadership. Salzman pleaded guilty to racketeering conspiracy on March 13, 2019, in connection with a first superseding indictment that originally also charged her with conspiracy to commit identity theft and conspiracy to alter records in an official proceeding.

“At the time of the defendant’s guilty plea, the government estimated the applicable U.S. Sentencing Guidelines . . . range as 33 to 41 months’ imprisonment,” prosecutors said.  “For the reasons that follow, the government respectfully requests that the Court impose a sentence at the high end of that range.”

In other words, prosecutors want Salzman behind bars for somewhere in the vicinity of three years and five months.

But the government also admitted it botched the initial calculation. It now admits that Salzman is actually eligible to serve a range of 41 to 51 months under the applicable sentencing guidelines. That’s part of the reason why prosecutors are asking the judge to abide by the upper limits of the 33 to 41 range.

Salzman, who was known in the group by the nickname “Prefect,” “participated in the unlawful surveillance and investigation of perceived critics and enemies of Raniere and Nxivm,” prosecutors wrote in the sentencing memorandum (in turn citing a presentence report). “The targets of these efforts included high-ranking politicians, reporters who had published articles critical of Raniere or Nxivm, Nxivm’s own lawyers, legal adversaries and their families, an accountant (James Loperfido) who worked for an attorney who had previously done work for Nxivm, and Edgar Bronfman Sr., the father of Clare Bronfman.”

“Nancy Salzman helped Nxivm retain private firms, including Interfor and Canaprobe, in order to investigate perceived enemies of Nxivm and Raniere,” the memorandum continues. “Between approximately 2007 and 2009, Canaprobe sent the results of purported ‘bank sweeps’ for bank account and balance information belonging to Nxivm’s adversaries.”

A March 27, 2018 search warrant uncovered “a large box containing purported private banking information of many individuals perceived to be Nxivm enemies, including Edgar Bronfman, Joseph O’Hara, Rick Ross, and others,” the memorandum continued. It also said the warrant uncovered “purported banking information for, among other individuals, the author of the October 2003 Forbes article” that was criticial of NXIVM and “prominent New York politicians and lobbyists.”

The document goes on to say that Salzman edited videotapes to “obstruct justice.” The videotapes were supposed to be part of a 2003 lawsuit against a former NXIVM member who the group claimed violated a nondisclosure agreement by giving recordings to Rick Ross, a “cult deprogrammer.” More specifically (citations omitted):

Franco’s attorneys requested the production of certain videotapes in support of their claim that the Nxivm curriculum contained false statements and violated certain state consumer protection laws. Nancy Salzman agreed to alter the videotapes to remove certain segments from them without having the videotapes appear altered. Kristin Keefe and Bronfman provided Vicente with instructions for altering the videotapes to remove content, including segments in which Nancy Salzman made unsubstantiated health claims about Nxivm’s curriculum. These altered videotapes were then produced in discovery by Nxivm’s attorneys with the false claim that they were provided in “unedited fashion.” The suit against Franco and Ross was not dismissed until December 2017.

Though those acts led to the criminal conviction, the sentencing memorandum describes Salzman’s broader conduct within NXIVM. Again, from the memo at length:

For well over a decade, Nancy Salzman was a loyal and integral member of the criminal enterprise led by her co-defendant Keith Raniere. She was the President of Nxivm and second-in-command to Raniere until her arrest and, in that role, the defendant exalted Raniere’s teachings and ideology and demanded absolute commitment and deference to Raniere. Raniere’s teachings, which Nancy Salzman helped to create and promote, were designed to maintain power and control over Nxivm members. The defendant instructed Nxivm members that anyone who challenged Raniere or Nxivm, including family members and friends, were “suppressives” and must be avoided.

As reflected in several victim impact statements, the defendant told Nxivm members that they had committed “ethical breaches” which they needed to remedy, often in ways that benefitted the defendant or Raniere. Nxivm members were told that they were in “breach” for, among other things, supposed lack of work ethic, failing to lose weight, exhibiting “pride,” “playing the victim,” or causing negative publicity for Nxivm or Raniere. Many of the Nxivm teachings promulgated by Nancy Salzman disparaged or humiliated women and blamed victims of abuse. Some of these teachings also questioned the age of consent and suggested children as young as 12 years old were capable of consenting to sex. As Camila notes in her victim impact statement, the defendant promoted Raniere’s “poisonous and predatory falsehoods to an unsuspecting audience” including the notion that “girls could be ready for sex as soon as they are physically capable to conceive, that women enjoy the out-of-control experience that comes from being raped, and that some women are only able to climax during such horrific events, all the same twisted ideas he used to groom me and abuse me.”

Though Salzman has “renounced” Raniere and articulated “terrible remorse” for her actions, the government’s attorneys argued that higher sentence would “satisfy the goals” of justice.

The defense has not yet filed its sentencing memorandum. That document is due Aug. 25. Salzman’s sentencing hearing is scheduled for Sept. 8 in the Eastern District of New York.

Read the eight-page government memorandum below:

[image via The Vow/HBO/YouTube screengrab]