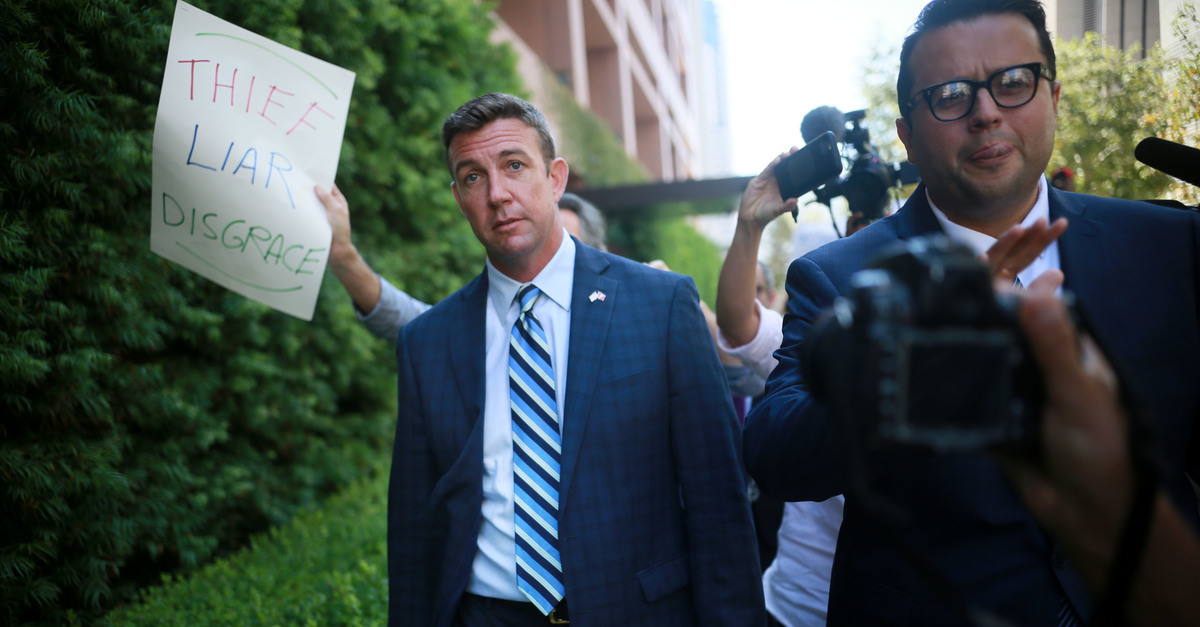 Margaret Hunter, a co-defendant in a federal fraud case with her husband Rep. Duncan Hunter (R-Calif., 50th District), is expected to change her plea. A change of plea hearing is set for Thursday at 10 a.m. in a San Diego court, according to federal records.

The couple allegedly misused about $250,000 in campaign donations for personal expenses. In one incident, Rep. Hunter planned on buying a pair of “Hawaii shorts” for golf, but didn’t immediately have the money. Mrs. Hunter allegedly suggested a plan:

[Margaret Hunter] counseled [Duncan Hunter] to buy the shorts at a golf pro shop so that they could falsely describe the purchase later as ‘some [golf] balls for the wounded warriors.’

The congressman memorably shifted responsibility for any alleged financial problems from himself to his wife.

“When I went away to Iraq in 2003, the first time, I gave her power of attorney,” he said last year. “She handled my finances throughout my entire military career and that continued on when I got into Congress. She was also the campaign manager, so whatever she did, that’ll be looked at, too, I’m sure, but I didn’t do it.”

The couple pleaded not guilty at first.

🚨 Margaret Hunter, the wife of Congressman Duncan Hunter who was co-indicted w/ her husband last summer, has agreed to change her plea of not guilty…

Hunter’s lawyer says the development has no immediate bearing on his client’s case.https://t.co/nrLOZUuqj7

Margaret Hunter’s attorneys did not immediately respond to a Law&Crime request for comment.

“We are aware of Mrs. Hunter scheduling a hearing to change her plea,” Rep. Hunter’s lawyer Gregory Vega told The San Diego Union Tribune. “At this time, that does not change anything regarding Congressman Hunter. There are still significant motions that need to be litigated, specifically the speech or debate clause of the U.S. Constitution.”

Editor’s Note: The article was fixed to reflect that Margaret Hunter is simply scheduled for a change of plea hearing.