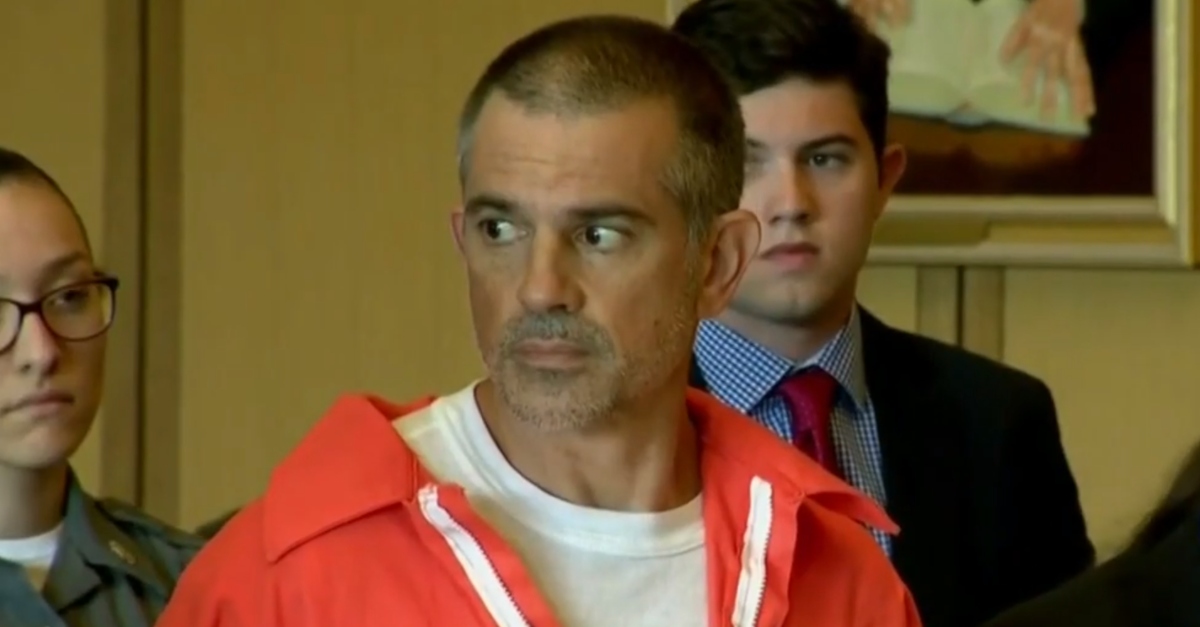 Attorneys for Connecticut man Fotis Dulos, 51, are attempting to build a defense in the disappearance of Dulos’s 50-year-old estranged wife Jennifer Dulos. To do so, they’ll need their client’s stuff back, they say.

In a motion, the defense requested that authorities return three vehicles, phones, and computer equipment — all of which were seized as evidence.

“The defendant needs access to it for practical reasons and in order to mount his defense,” wrote co-counsel Kevin Smith in a filing obtained by The Middletown Press.

Fotis Dulos and his girlfriend Michelle Troconis, 44, are out on $500,000 bail each; they have pleaded not guilty to hindering prosecution and tampering with evidence. While Troconis appears to be cooperating with authorities, Dulos has been freezing out reporters who have encountered him while he was out and about.

Dulos was spotted on separate occasions shopping at a grocery store and jogging — with an GPS monitor around his ankle in plain view.

CAUGHT ON CAMERA: Fotis Dulos taking a jog outside his Jefferson Crossing property. He is seen wearing an ankle monitor that was ordered by a judge. @FOX61News . pic.twitter.com/6LKhHhYMJG

Police said surveillance footage caught Fotis Dulos’ black Ford Raptor truck making over 30 stops in Hartford, Connecticut, dropping off trash bags on May 24, the day that his estranged wife went missing from New Canaan. The two were in the middle of a contentious divorce. These bags and the scene at Jennifer’s home suggested that Jennifer Dulos was the victim of a violent crime, cops said.

Fotis Dulos’ lead defense lawyer Norm Pattis acknowledged that it looked bad for his client, but insisted that police only have circumstantial evidence so far. State authorities have said they found Dulos’s DNA mixed with Jennifer”s blood — blood that was allegedly discovered in the kitchen sink of her home.

Pattis doesn’t appear to be worried about this “at all.”

Pattis told WFSB his client was working out of Farmington, and taking phone calls. He also said Dulos’s business has been affected.

“People aren’t buying his properties right now, or if they are, they’re offering to purchase them at far lower rates and he’s not interested,” he said. “So, he’s back at work and trying to keep his business afloat amid tremendous public hostility.”