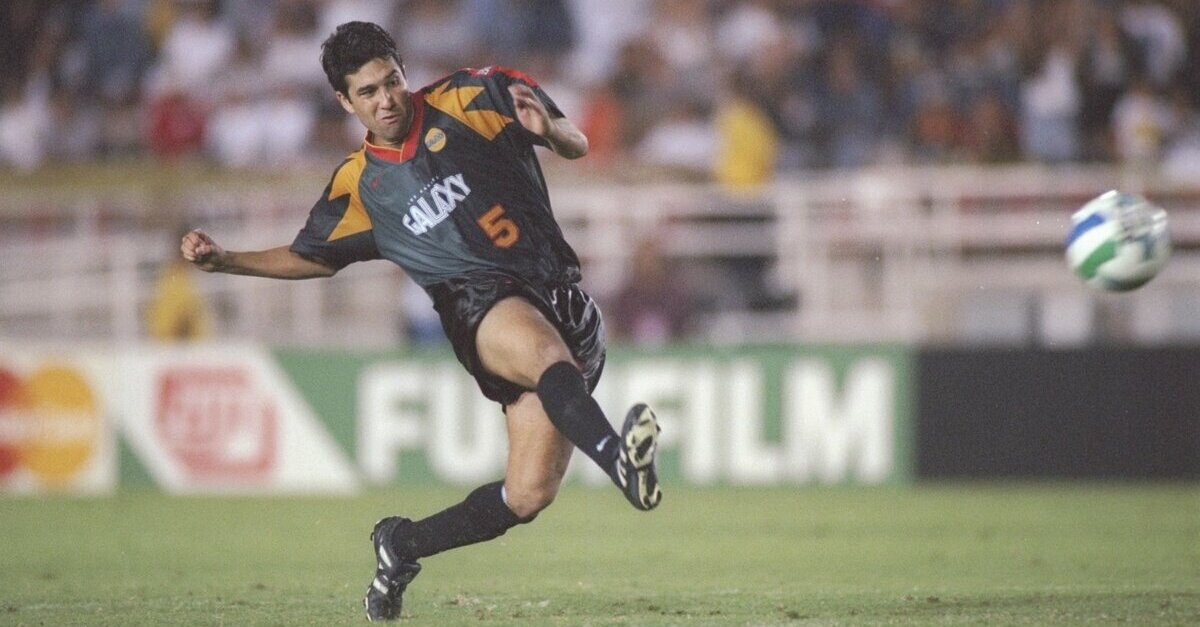 21 Aug 1996: Jorge Salcedo of the Los Angeles Galaxy kicks the soccer ball during game against the Kansas City Wizards at the Rose Bowl in Pasadena, California.

The one-time head of the men’s soccer program at the University of California – Los Angeles (UCLA) has agreed to plead guilty in the ongoing college admissions scandal, according to the U.S. Attorney’s Office for the District of Massachusetts.

On Tuesday, the Department of Justice announced that 47-year-old Jorge Salcedo, a former soccer star in his own right who played on the U.S. Men’s National Team, is set to plead out on one charge of conspiracy to commit racketeering over his involvement in the scandal to secure college admissions for the children of the wealthy.

The years-long scheme was facilitated by alleged mastermind William “Rick” Singer. He allegedly ran the Key Worldwide Foundation (KWF), a nonprofit advertised as a way for children who grew up surrounded by gang violence to better themselves, as a slush fund to secure continued privileges at the collegiate level for children who grew up rich. In Salcedo’s case, he allegedly worked with Singer and UCLA women’s soccer coach Ali Khosroshahin.

The indictment outlines the general contours of the alleged scheme:

On or about April 6, 2016, Singer emailed Khosroshahin a falsified soccer profile for UCLA Applicant 1.

On or about May 20, 2016, Khosroshahin forwarded the soccer profile to Salcedo.

On or about May 24, 2016, the parents of UCLA Applicant 1 emailed Singer their daughter’s high school transcript and standardized test scores.

Singer forwarded the transcript and test scores to Salcedo, who forwarded them to a UCLA women’s soccer coach.

On or about June 29, 2016, the UCLA Student-Athlete Admissions Committee approved UCLA Applicant 1 for “provisional student-athlete admission,” pursuant to which she would be admitted to the university on the condition that she met certain requirements, including that she successfully completed her senior year of high school and participated on the UCLA team as a student-athlete for a minimum of one full academic year.

On or about July 6, 2016, Salcedo emailed Singer that UCLA Applicant 1 had been provisionally admitted to the university as a student-athlete.

On or about July 7, 2016, Singer directed a payment of $100,000 from one of the KWF charitable accounts to a sports marketing company Salcedo controlled.

Davina and Bruce Isackson then paid Singer $250,000. Salcedo netted $100,000 out of the deal, according to federal prosecutors. The DOJ offered additional details of Salcedo’s role securing admission for another wealthy child in a Tuesday news release.

“In 2018, Salcedo agreed with Singer and Khosroshahin to ‘recruit’ the son of Xiaoning Sui, another client of Singer’s, to the UCLA men’s soccer team,” the release notes. “Sui’s son did not play soccer competitively. In exchange for the recruitment, Salcedo accepted a $100,000 bribe from Singer. Sui paid Singer $400,000.”

Per the terms of the agreement, Salcedo will plead guilty to one charge of conspiracy to commit racketeering and the Massachusetts U.S. Attorney’s Office will reward him by recommending a sentence at the low end of the sentencing guidelines, one year of supervised release, a fine, forfeiture in the amount of $200,000 and restitution.

A hearing in the matter has not yet been set.