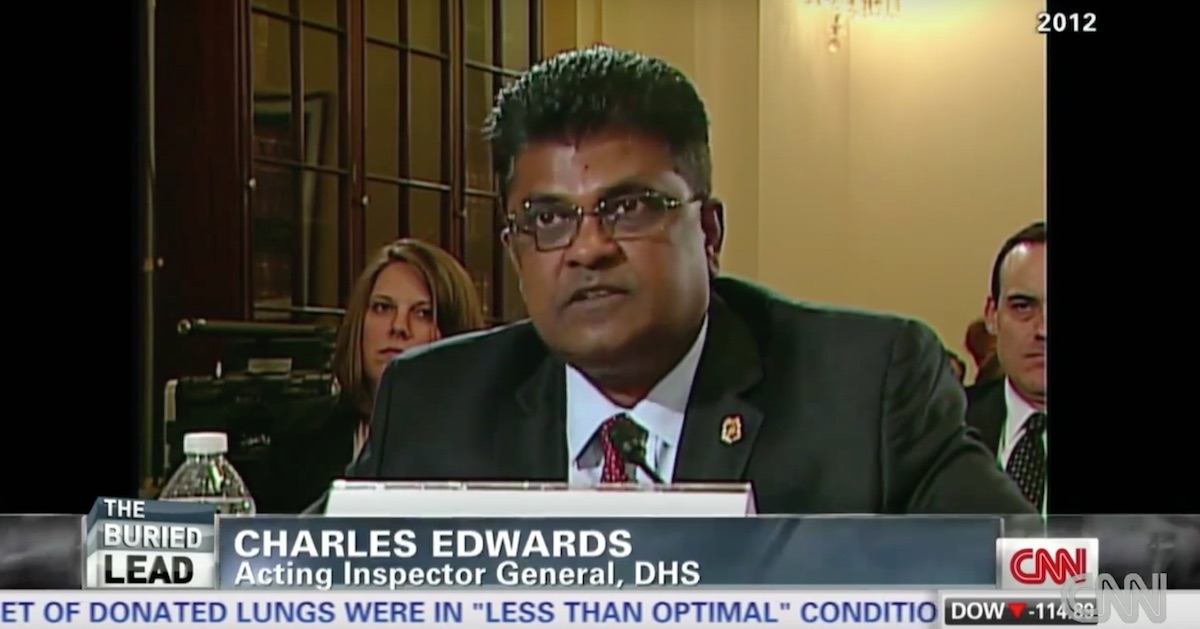 A 59-year-old Maryland man who served as the Acting Inspector General for the U.S. Department of Homeland Security (DHS) between the 2011 and 2013 years of Barack Obama’s presidency has been indicted for alleged theft and fraud.

The Department of Justice announced the charges against Charles K. Edwards and 54-year-old Virginia resident Murali Yamazula Venkata on Friday. The defendants are each accused of wire fraud, conspiracy to commit theft of government property, conspiracy to defraud the United States, aggravated identity theft, and theft of government property. Venkata is additionally accused of destroying records.

Per the DOJ press release:

According to the allegations in the indictment, from October 2014 to April 2017, Edwards, Venkata, and others executed a scheme to defraud the U.S. government by stealing confidential and proprietary software from DHS Office of Inspector General (OIG), along with sensitive government databases containing personal identifying information (PII) of DHS and USPS employees, so that Edwards’s company, Delta Business Solutions, could later sell an enhanced version of DHS-OIG’s software to the Office of Inspector General for the U.S. Department of Agriculture at a profit. Although Edwards had left DHS-OIG in December 2013, he continued to leverage his relationship with Venkata and other DHS-OIG employees to steal the software and the sensitive government databases.

The indictment further alleges that, in addition to stealing DHS-OIG’s software and the sensitive government databases, Venkata and others also assisted Edwards by reconfiguring his laptop so that he could properly upload the stolen software and databases, provided troubleshooting support whenever Edwards required it, and helped him build a testing server at his residence with the stolen software and databases, which contained PII. As further part of the alleged scheme, Edwards retained software developers in India for the purpose of developing his commercial alternative of DHS-OIG’s software.

The case against Edwards immediately reminded of a time when he was accused by whistleblowers of abusing his authority and violating ethical standards. That was in 2013. He resigned in Dec. 2013, days before a scheduled Senate hearing, according to the Washington Post.

The Homeland Security and Government Operations Committee found in April 2014 that Edwards “altered and delayed investigations at the request of senior administration officials, compromising his independent role as an inspector general.”

In short, the Department of Justice is alleging that after Edwards resigned he engaged in criminal activity for three years.