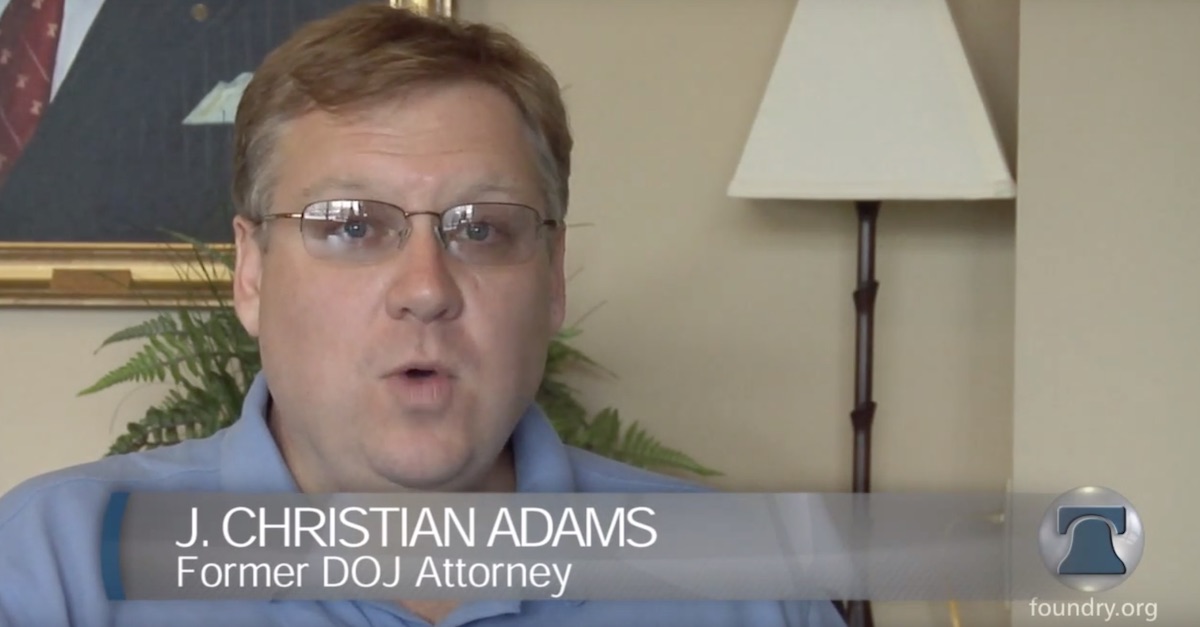 A former commissioner on President Donald Trump’s now-defunct Voter Fraud Commission reached a settlement this week with a group of Virginia voters who claimed they were subjected to false accusations of felony voter fraud.

The initial lawsuit was filed last year in Virginia federal court by voting rights groups and four individuals accusing the Public Interest Legal Foundation (PILF) and its president and general counsel J. Christian Adams of creating and distributing reports that falsely mislabeled them as non-citizens who illegally registered to vote — despite all of the plaintiffs being American citizens.

The PILF reports, titled “Alien Invasion in Virginia” and “Alien Invasion II,” were released in 2016 and 2017 respectively, and stated that thousands of people had committed felonies by illegally registering to vote in Virginia. According to the complaint, Alien Invasion II contained information about many of the purported felons, including their names, addresses, phone numbers, and “in some cases social security numbers.”

Adams told Law&Crime that “Social Security numbers were not listed in the reports.”

The plaintiffs claimed that the false accusations and releasing of their personal information amounted to voter intimidation and defamation.

“Congress had mandated that all of that information is public, period. Not only is it public, it is subject to physical inspection by any member of the public. To characterize names, addresses or even phone numbers in election list maintenance records as ‘private’ or words to that effect is inaccurate,” he said. “To say PILF published ‘private’ or personal information is therefore doubly inaccurate.”

“That issue has been settled by the 4th Circuit and the federal courts in Virginia and we have won that issue in litigation over and over,” he added. “To claim that any of the information was private or personal information is flatly contradicted by both federal statute and controlling case authority.”

Under the settlement agreement, PILF will be required to place an addendum at the front of the “Alien” reports which will read, “PILF recognizes that individuals in [the removed exhibits] were in fact citizens and that these citizens did not commit felonies. PILF profoundly regrets any characterization of those registrants as felons or instances of registration or voting as felonies.”

Adams, a former attorney for George W. Bush’s Department of Justice, must also provide a written apology to the plaintiffs on behalf of himself and the group, which is also required to remove any information of individuals purported to have illegally registered to vote from its current and future reports.

PILF released a statement Tuesday in which the group offered a “profound apology that it relied so heavily on the commonwealth election records, it seemed implausible that Virginia would be improperly removing American citizens from the voter rolls.”

“The Foundation looks forward to discussing the vast resources behind those who oppose election integrity and engage in efforts to stifle any speech that raises awareness of the real vulnerabilities in the security of American elections,” PILF said.

However, it should be noted that documents revealed through discovery appear to show that at the time PILF released the Alien reports, the group possessed internal emails from Virginia election officials who were worried about how the state’s voting records were being misrepresented. 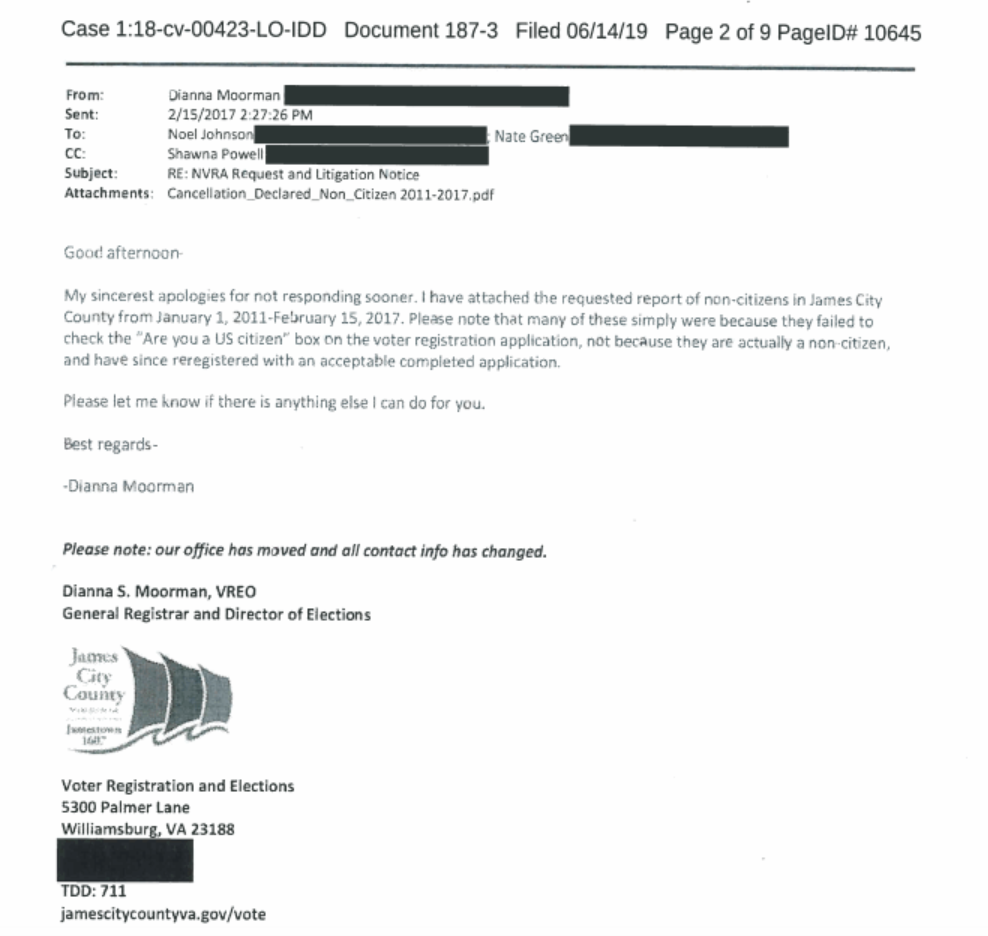 A month later, emails showed that in one instance that the DMV flagged 197 individuals as non-citizens, but that many of the people then verified that they were citizens — a “good number” of them “very rapidly because they have security clearances that could be at risk if there was some indication they were not citizens.” 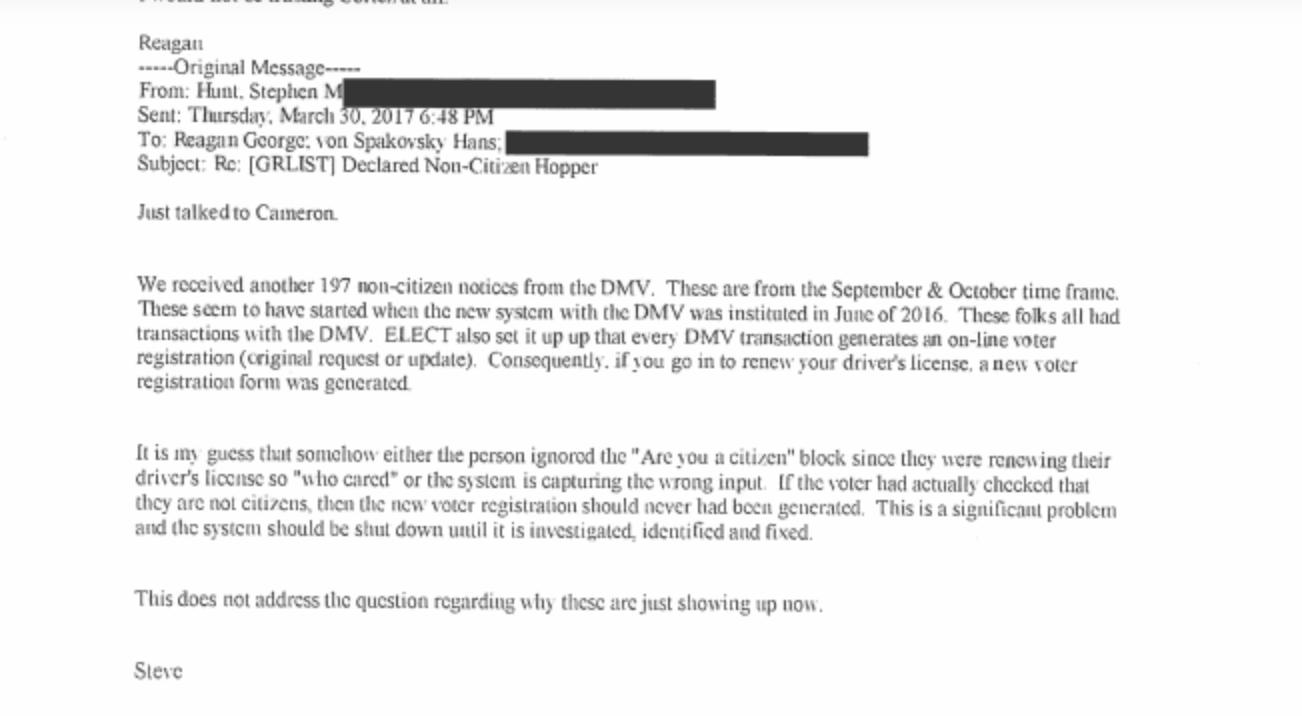 In May, Keith Damon, an individual identified by Protect Democracy (one of the voting rights groups that brought the lawsuit) as a volunteer, wondered in an email if DMV was “really” providing a “list of actual non-citizens” or if the DMV “indicated that they are non-citizen regardless of their true status.”

One response to Damon’s email: 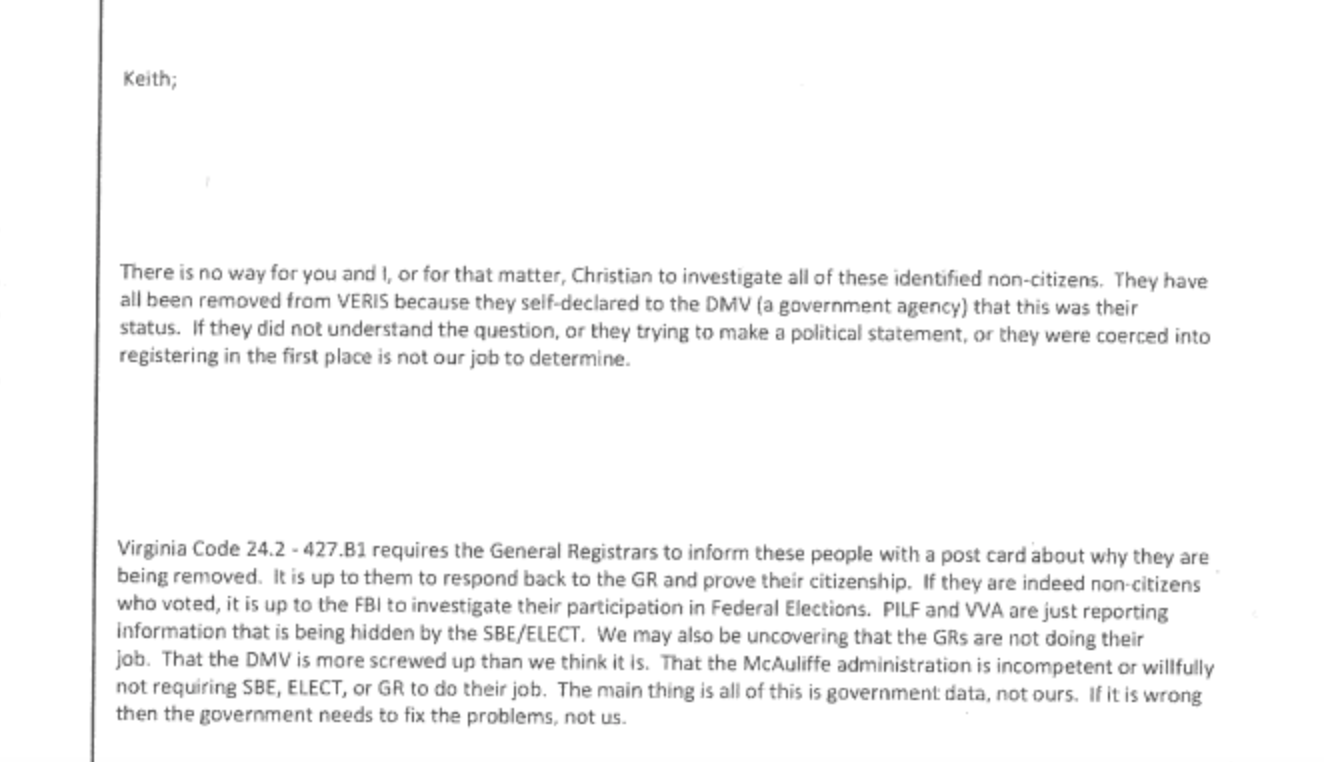 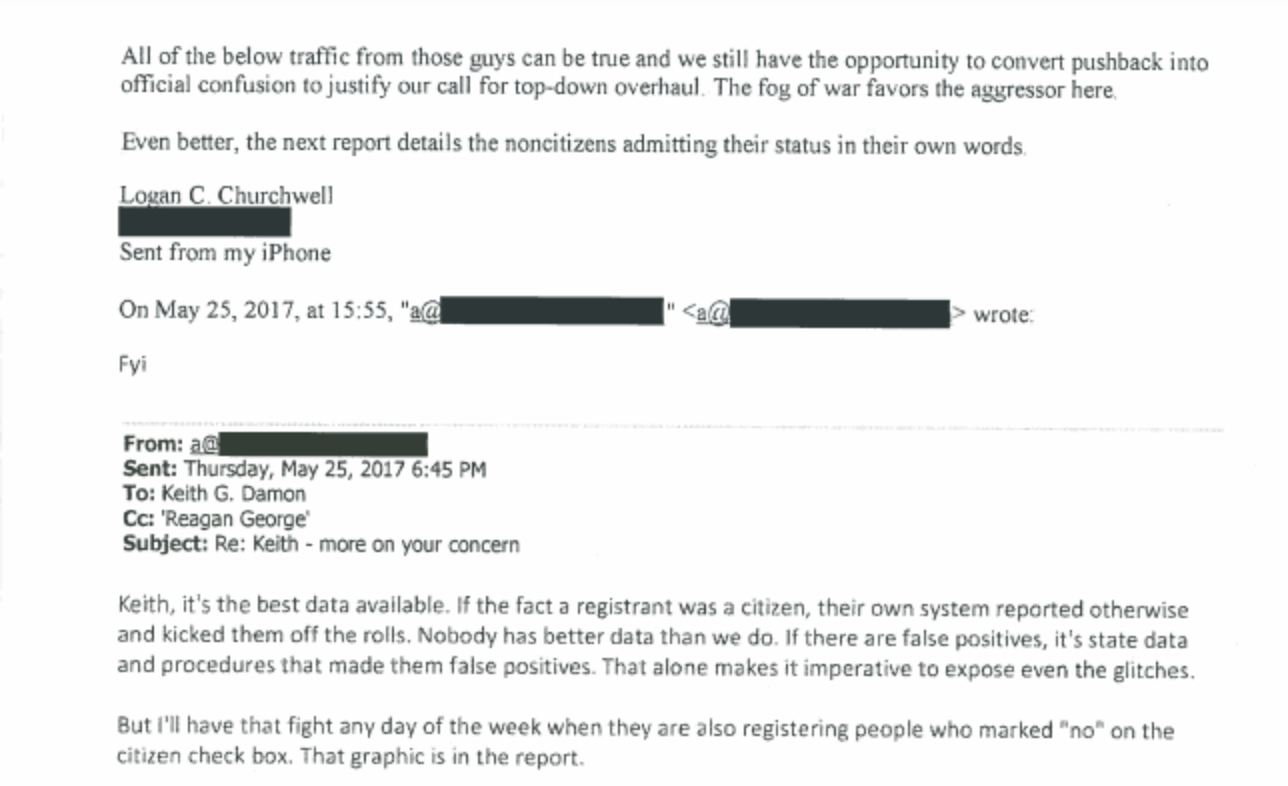 “All of the below traffic from those guys can be true,” Churchwell wrote, referencing the concerns over the veracity of the data being used in PILF’s ‘Alien’ reports. “We still have the opportunity to convert pushback into official confusion to justify our call for top-down overhaul. The fog of war favors the aggressors here.”

Cameron Kistler, an attorney at Protect Democracy, praised the settlement as a win for democracy.

“Not only did it reaffirm that the Voting Rights Act and the Ku Klux Klan Act guarantee every eligible voter the right to vote free from intimidation, but the defendants also agreed to put in place safeguards to ensure that they never again injure innocent Virginians,” Kistler said.

That sentiment was echoed by Sean M. Tepe, a lead pro bono counsel in the case.

“Our plaintiffs, and an undetermined number of other citizens, were wrongly caught up in Defendants’ effort to create a voter fraud narrative and manufacture fear,” Tepe said in a statement. “This settlement proves that facts still matter and that innocent people should not be used as pawns in others’ political wars.”

Editor’s note: This article was amended post-publication to: add a response from Adams about social security numbers; to add a response from Adams disputing the characterization of information other than social security numbers as “private” or “personal”; to clarify what Churchwell was responding to in an email chain about the DMV’s non-citizen notices, and to remove unnecessary editorialization about it; to clarify what internal PILF concerns were about and who was raising them.